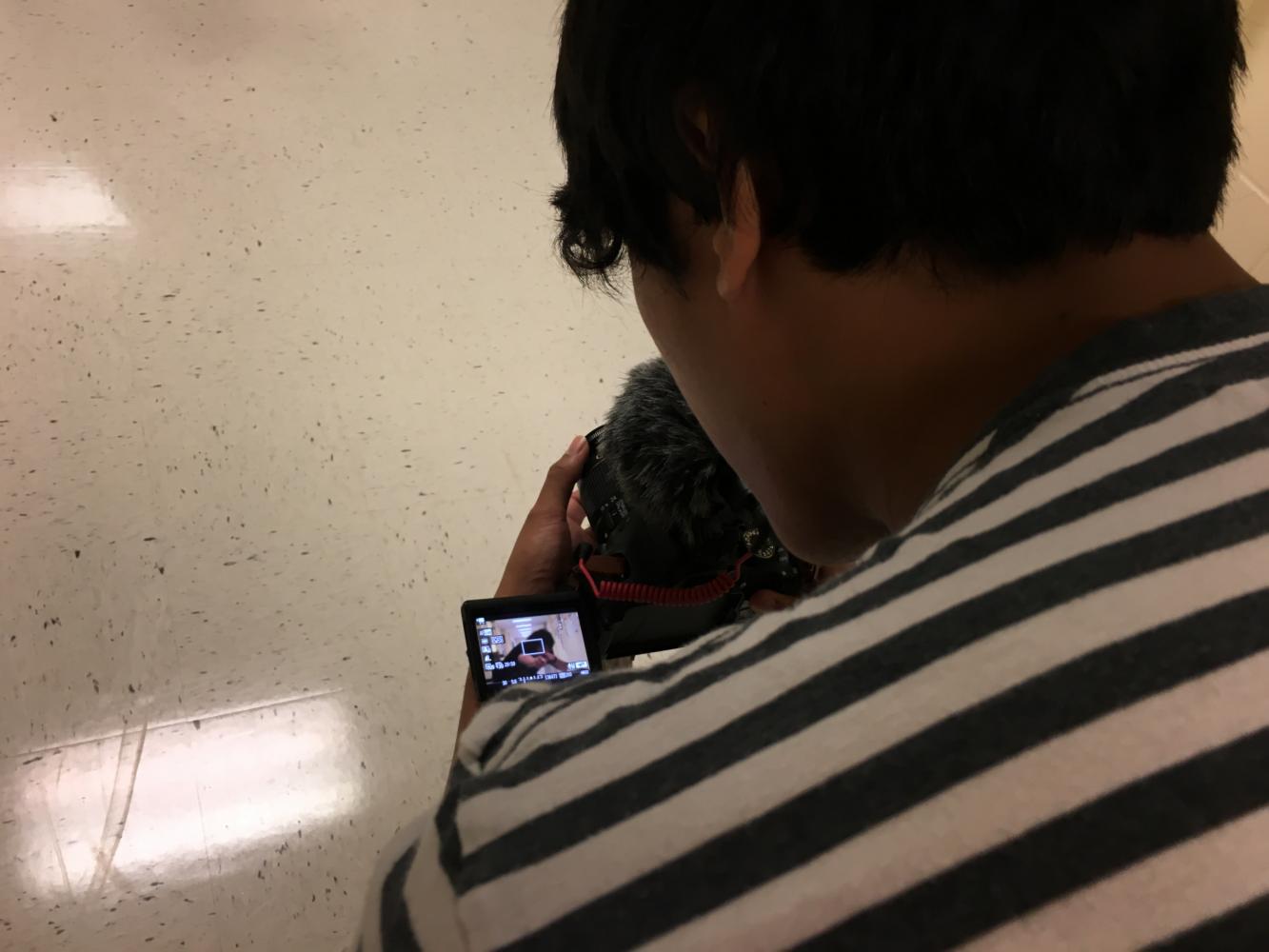 How a lens can shape dreams: Filmmakers at NC strive for greatness

According to American director Nicholas Ray, “film recognizes neither time nor space, only the limits of man’s imagination.” The opportunities one can pursue with film never ends. With the power of creativity, students in the audio-video technology and film class produce their talents on camera, and hope to one day arrive on the big screen.

“Stories matter, but stories about people matter more. To me, that’s what it’s all about. Everyone has a story and we love to help tell that,” Audio-Video Technology and Film teacher Josh Dempsey said.

At NC, students take the Audio-Visual Technology and Film pathway to gain experience in the field, telling stories from around the school. Whether the student takes level one of the class or has excelled all the way through level four, they gain the opportunity to present stories in their perspective and through their voice.

Every student approaches film differently and sticks to the hobby for different reasons. Junior Connor Langston currently takes Dempsey’s class and shows no signs of stopping.

“I love being on set with my friends and just filming any video, whether it’s a serious video or a comedy,” Langston said. “All of it is cool because you’re getting together with your friends and working towards a goal you guys have all made up together.”

When he first started high school, Langston’s passion for film had yet to come to realization. He began a career pathway course with Michael Barcarse’s Architectural and Engineering Drawing and Design class, but sitting across the hall from Dempsey gave Langston inspiration to enter a new field.

“I was never even interested in film at first; my real passion is actually making music,” Langston said. “But, I would watch people on Tomahawk Today and got inspired by the people on there and thought they made really funny videos. I also thought Dempsey was a cool teacher, so I decided to take his class because it looked like a fun class.”

Once taking the class, Langston’s creativity began to expand in the filming aspect, as well as his passion for music. After learning so much about the class and getting a better understanding of film, he started to realize what he wanted to pursue as a possible career path, trying to balance both of his interests.

“You’re creating something out of nothing. If I would be able to get a job in both filming and creating music, it wouldn’t even be a job to me. It would be a lifestyle,” Langston said.

For senior Marc Alano, filming created a gateway for opportunities and experiences, while making his name and face known throughout the school.

“What motivates me is the thought of making a name for myself and to differentiate me from other people,” Alano said. “What brings me into film is being able to express myself and being able to tell a story to everyone. Through videos, I can show life through my perspective.”

With being senior producer for NC’s morning news show, Tomahawk Today, comes great responsibility. Alano overlooks all aspects of the show, making sure each one comes out with the best possible quality. While serving as the head of it all, he also provides material for the show, but not because he has to, because he wants to.

“We film Tomahawk Today every Tuesday and Wednesday, so usually during school I shoot videos, skits, news packages, all that stuff,” Alano said. “I like to have a lot of videos of mine on Tomahawk so people can remember me. When they see Tomahawk Today, I want them to say, “Oh, there’s Marc Alano.’ I think that leaving a legacy is really important. Being remembered is my goal.”

With his time running out, Alano must now start planning for the future and thinking about what he wants to do with the knowledge he gained from Dempsey’s class. His thoughts on life after high school resemble those of few, with no clear profession in mind. Despite this, Alano will take the many talents he currently possesses to the next level in some shape, way, or form.

Junior Rylan Kelly exemplifies a successful student in Dempsey’s career pathway class. After getting through level one, he now takes on level two with his next motives already in mind.

“Ever since taking Dempsey’s class I really enjoyed doing film. So now, I’m taking the next class and plan to take level three next year,” Kelly said.

While in the class, Kelly learned every essential aspect of film, nearly becoming an expert with a camera. Like many students, he likes to get his name out and receive recognition for the media he creates. The best way one can do that at NC? Enter film festivals.

“We have entered in a few film competitions. I have acted in a film that we submitted to this Roswell Film Festival, called ‘Child’s Play,’ and actually won Best Comedy, which was really fun to make,” Kelly said.

In high school, film festivals give students an outlet to get their creations out into the public and possibly earn recognition for them.

Along with sending videos in for film festivals, sending in videos to appear on Tomahawk Today allows students to receive further recognition for films that students create. Kelly uses this to his advantage, because for now he just wants people to remember his face.

“I really enjoy making short films and skits, like things for Tomahawk are fun to make because everyone gets to see it, and you get a little bit of fame I guess. People come up to me and say ‘Oh hey, that was you on the show!,’” Kelly said.

Kelly’s ambition shows in both the videos he creates and his motivation for the field. With the mindset that he can always better himself, he readies himself for a more professional job regarding his passion.

“When you make something, you put in as much effort as you can, but you always strive for more,” Kelly said. “You can make the best video you’ve ever made, but it’s still not perfect. There’s still something you can improve on.”

Another student who strives in Dempsey’s class, sophomore Emily LaPierre, already begins to include herself in the morning news show.

“I work in Tomahawk Today by helping to write the script and by doing weather, announcements, and making videos in Dempsey’s class,” LaPierre said.

LaPierre’s passion for film goes all the way back before her middle school days. Before even knowing anything about the field, she received a gift that changed how she looked at film.

“When I was in fifth grade, my parents gave me this camera,” LaPierre said. “It was pink and big and clunky and had Disney princesses and it was great! So I started filming things and my dad showed me how to edit on Windows Movie Maker and since then I’ve just loved messing with cameras. Then I decided to join news team and did it all throughout middle school.”

She started her high school film career in Dempsey’s first level class. After learning the basics and then some, she began to realize possible career choices she might want to pursue.

“I want a lot of experience in the field,” LaPierre said. “I want to be able to go out in the workforce, knowing what’s coming, and having a general idea on how to do everything instead of specializing in just one thing. I really want to be an actress or a director, but if that doesn’t happen, I would be totally happy to be a news producer or to just work on commercials,” LaPierre said.

Josh Jenkins, another sophomore at NC with a similar passion, currently takes the level two Audio-Video Technology and Film class, which he received the Best Student honors award for. He works on creating videos for the class, as well as skits for Tomahawk Today.

“I talked to some people who took level two last year about taking the class and they talked a lot about how fun his class is. So, with my free elective spot I decided to take the class,” Jenkins said.

Being a sophomore, Jenkins wants to get the most possible experience in the field before becoming an upperclassman. He starts to take every opportunity he can to learn more, joining SkillsUSA and submitting a video to the Cobb County Student Film Festival.

“We didn’t place very high at film fest, but we learned a lot from it. In SkillsUSA, I placed third in business, industry, and video production which was a lot of fun to do,” Jenkins said.

Moving forward, Jenkins plans to take the level three course of Dempsey’s class next year with the mindset of completing the career pathway. Something that started as just a “fun thing to do” now starts to hold more significance for the future.

“At first it just seemed like I wanted to film for fun, but now that I’ve gotten into it, I’m really enjoying it and would love to be able to pursue a career in it, that would be a great experience,” Jenkins said.

Senior Almendra Fuentes moved to Georgia from her hometown in Chile two years ago with dreams of becoming an actress. After exploring everything that NC offered, film quickly started to grow on her, and she won Best Student honors for Dempsey’s level three class.

“I enjoy any kind of art, but when I decided to try filming, I realized I can combine all arts and put it in a video,” Fuentes said.

She became fond of the idea of making films, and it gave her the ability to combine many elements into one: acting, film, and music. She brought this to the test by also joining SkillsUSA and finishing with a very pleasing outcome.

“I really enjoy making music videos and highlight videos,” Fuentes said. “I got second place in the SkillsUSA Georgia Music Video State Competition. It was my first time producing a music video and it came out really good.”

Fuentes left Chile for a reason, but she expanded her skillset in great lengths to broaden her possibilities once graduating. She will always remember what she left behind and looks to continue to succeed day after day.

“I moved here from Chile for a dream: I wanted to become an actress originally. So, I left everything behind and came by myself,” Fuentes said. “Everyday, I wake up in the morning and I say, ‘I’m gonna make this a great day and I’m gonna learn something new and put in practice so I can get better.’”

Making it to the big screen runs through these students’ minds every day, dreaming that one day they will receive fame and fortune from all their hard work. For now, the work continues and their eye stays on the prize, hungry for more experience and knowledge about the art of film.

One Response to “How a lens can shape dreams: Filmmakers at NC strive for greatness”