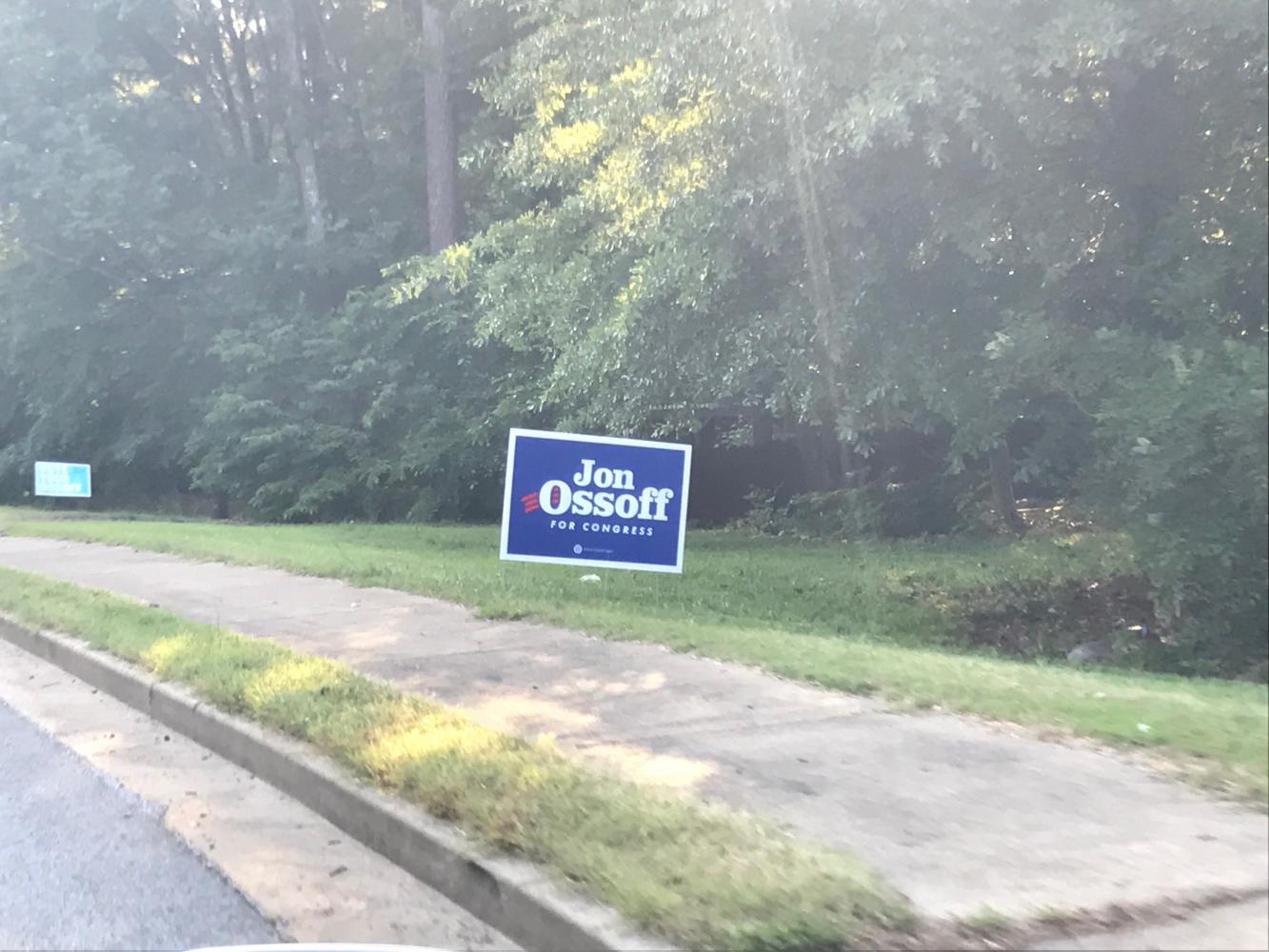 Who is funding Cobb County representatives?

The discussion to reform campaign finance began after the historic Citizens United vs. FEC Supreme Court case decision on January 21, 2010. In a 5-4 decision, the Supreme Court ruled that corporations and Super Pacs, or organizations designed to provide funds to politicians with similar political goals, could give unlimited money to political campaigns under the free speech clause in the first amendment of the U.S constitution.

“The Citizens United decision basically made the argument that political money is a form of free speech. That a form of expressing one’s opinion can be monetary,” AP Comparative Government and AP Art History teacher Carolyn Galloway said.

According to the Federal Election Commission, individuals may donate up to $2,700 per election to a federal candidate, $5,000 a year to Political Action Committees (PACs), $10,000 per year to state or local party committee, and $33,900 per year to a national party committee. The political donation cap does not include Super PACs since they cannot directly use funds for a specific candidate. This means wealthy individuals can donate hundreds of thousands or even millions of dollars. While these Super PACs cannot give donations directly to a political party or campaign, they do generally promote the candidate or candidates they would like to see elected through creating their own ads and campaigns.

The decision set the stage for a surge of private money, both disclosed and undisclosed to pour into local, state, and federal campaigns for elected office. Undisclosed money, or “dark money,” became legal after the decision. While 38 states and the federal government maintain laws requiring Super Pac donors to disclose their names and the amount of money they contributed, dark money occurs due to unseemly ways of contributing without disclosing names.

“My dad, who writes for the Atlanta Journal Constitution, loves the phrase ‘Money is like water; it will find cracks and get through,’” Galloway said.

The most common dark money technique includes forming Limited Liability Companies (LLCs) and shell companies to donate money on behalf of controversial people or organizations. Even with these laws, in the seven years since the decision, the amount of outside money brought in by political campaigns increased three times between the 2010 and 2014 campaign cycle, according to The Washington Post. The influx of money also increased the ability of campaigns to produce and show advertisements that seem to penetrate every American’s daily life during election cycles.

This begs the question: how has the increase in campaign donations, both known and unknown, affected Cobb County residents, and who funds Cobb County’s Congressional candidates?

The most recent election for a Senate seat in Georgia placed long time Republican incumbent Johnny Isakson against political newcomer and businessman Jim Barksdale. According to Barksdale’s website, finance reform maintained an importance in his bid to unseat Isakson: “Our broken campaign finance system rewards elected leaders who put the interests and campaign contributions of the special interests and their lobbyists ahead of the people and good governance. Jim supports repealing the disastrous Citizens United decision through a constitutional amendment that allows the states and Congress to regulate campaign finance and prevent our elections from being sold to the highest bidder – large corporations and the very rich.”

This line of thought matches almost identically to the ideology of the Democratic Party.

However, even with concerns about Isakson’s Parkinson’s Disease diagnosis, he whooped Barksdale in both campaign donations and in the polls. Isakson won 54 percent of the votes compared to Barksdale’s 41 percent on election day. Additionally, throughout the campaign, Isakson pulled in five and a half times more money than Barksdale with $11,018,641 compared to Barksdale’s $2,807,073. While Barksdale, according to Open Secrets, self-funded 70 percent of his campaign, Isakson raked in more than $24,000 from twenty Atlanta based corporations.

PACs served as both campaigns’ largest donors, but even here a major disparity appears. The PAC supporting Isakson, Votesane PAC, donated $174,200. That number, however large, did not place Isakson in the top spot for contributions from Votesane PAC. That honor goes to Chris Van Hollen of Maryland who lost his election despite the PAC’s $251,900 donation. Barksdale’s PAC, Jim Barksdale for Senate, donated $5,409 total. The disparity between the two candidates illustrates the difficulties new candidates must overcome in defeating incumbents, especially when the drastic difference in funds from corporations appears as it did in this race.

This race for senate brought to light two trends. First, more negative ads appeared on voters’ televisions than ever before as negative ads quickly became a favorite tool for PACs. They believed in the idea that bashing the opponent causes more leverage with voters than noting the good in the candidate they support. This trend continues to this day at the local, state, and federal level.

Second, this election taught candidates the importance of corporate backers. Nunn out-fundraised Perdue, but the latter brought in more money from business PACs than Nunn brought in from all types of PACs ($1.03 million vs $943,257). This corporate backing becomes evident in his voting record in the Senate. In fact, he sits on the Banking, Housing, and Urban Affairs Committee and on his website calls himself a “business guy” who has made “tough decisions while dealing with an onslaught of rules and regulations from Washington.” This reasonably gives him an outlet to vote for pro-business. However, voters must wonder how far in the back of his mind the business donors remain when he votes in the Senate.

The disparity between campaign donations created an easy win for one candidate for the House of Representatives in Georgia’s eleventh congressional district. In 2014, Republican Barry Loudermilk ran unopposed to fill the vacant House of Representatives seat, yet he still raised $1.12 million and spent $1.03 million. The campaign did not disclose 25 percent of the sources of donations. This makes Loudermilk the least transparent representative in Cobb County.

Democrat David Scott represents the people in Georgia’s thirteenth district. His Congressional website states the following on lobbying reform, “Previous elections have shown that the American people spoke clearly of their desire for a government with high ethical standards, transparency, disclosure and accountability. I and my colleagues worked to implement reforms in an effort to break the link between lobbyists and legislators by eliminating the acceptance of gifts, private jets, and meals from lobbyists. I will continue to vote in support of greater government transparency and high ethical standards for both members of Congress and their staff.”

He won his first election in 2002 and won all seven elections since then. He raised at least one million dollars in six of his eight races and ran unopposed in the 2014 and 2016 elections. In 2008, Republican Deborah Travis Honeycutt raised $5.27 million to Scott’s $1.2 million yet Scott still won. Scott and Isakson hold the distinction as the only two current congressman representing Cobb County to hold office before and after the Citizens United Decision.

While Scott boasts a good mix of corporations and workers unions and associations, the purpose of unions and associations includes making sure legislation passed helps the supporters of those organizations. By accepting these donations while still following the Citizens United laws, Scott risks the appearance of selling out to the unions to support what they desire.

The election for the sixth district continues to create buzz nationally; President Trump tweeted about the race before the primary election last month. The race already broke the all-time spending record, according to Politico. More than $29.7 million worth of TV ads in the race aired from candidates and outside groups. Ossoff received heat prior to the primary election because most of his $8.8 million in donations came from Democrats outside the sixth district and even outside the state of Georgia. However, Handel will receive a similar boost when the Super PAC with ties to Republican congressional leaders, Congressional Leadership Fund, finishes its plan to spend $8.5 million on the sixth district election.

The campaign donation numbers appear gaudy but this election could prove pivotal for whichever party wins. The Democrats want to retake control of the House and Senate by 2018 and Georgia’s sixth congressional district provides the first opportunity. Ossoff uses his money to target two distinct groups; the first group encompasses Democrats that continue to boil over in anger over some controversial decisions the Trump administration continue to make, and the other approach includes an all-out campaign to prove Republicans should vote for him because he hates wasting taxpayer money.

Republicans, on the other hand, want to maintain control in the house and Senate so they can continue to pass items on the Trump Administration’s agenda without too much hassle. Handel’s main plan with the money so far indicates she wants to show Ossoff as young and immature and not living in the sixth district. Early ads backed by Republicans showed Ossoff at a college party dressed as a Star Wars character. Furthermore, Handel wants voters to focus on her vast experience in Georgia politics.

Neither candidate will win this election in a landslide so money flowing into the respective campaigns serves as a pertinent key to an election day victory. The total amount of money will approach $40 million by the June 20 runoff election.

Increase in corporate and wealth-based influence continues to facilitate who maintains an edge in many elections. Time illustrates that Super PACS that donate more to candidates allow them to win more seats. According to Open Secrets, “As of April 03, 2017, 2,389 groups organized as Super PACs have reported total receipts of $1,790,933,772.” However, most of that money comes from wealthy individuals thus taking away political power from the average American. The average American now has less say in who wins an election and even less say in who gets to run than they did prior to 2012.

As Super PACs and other campaign finance fixtures continue to evolve post-Citizens United, America must find a solution to put the power of the vote back to normal people. That failure or success of that task will define the next phase of American democracy.