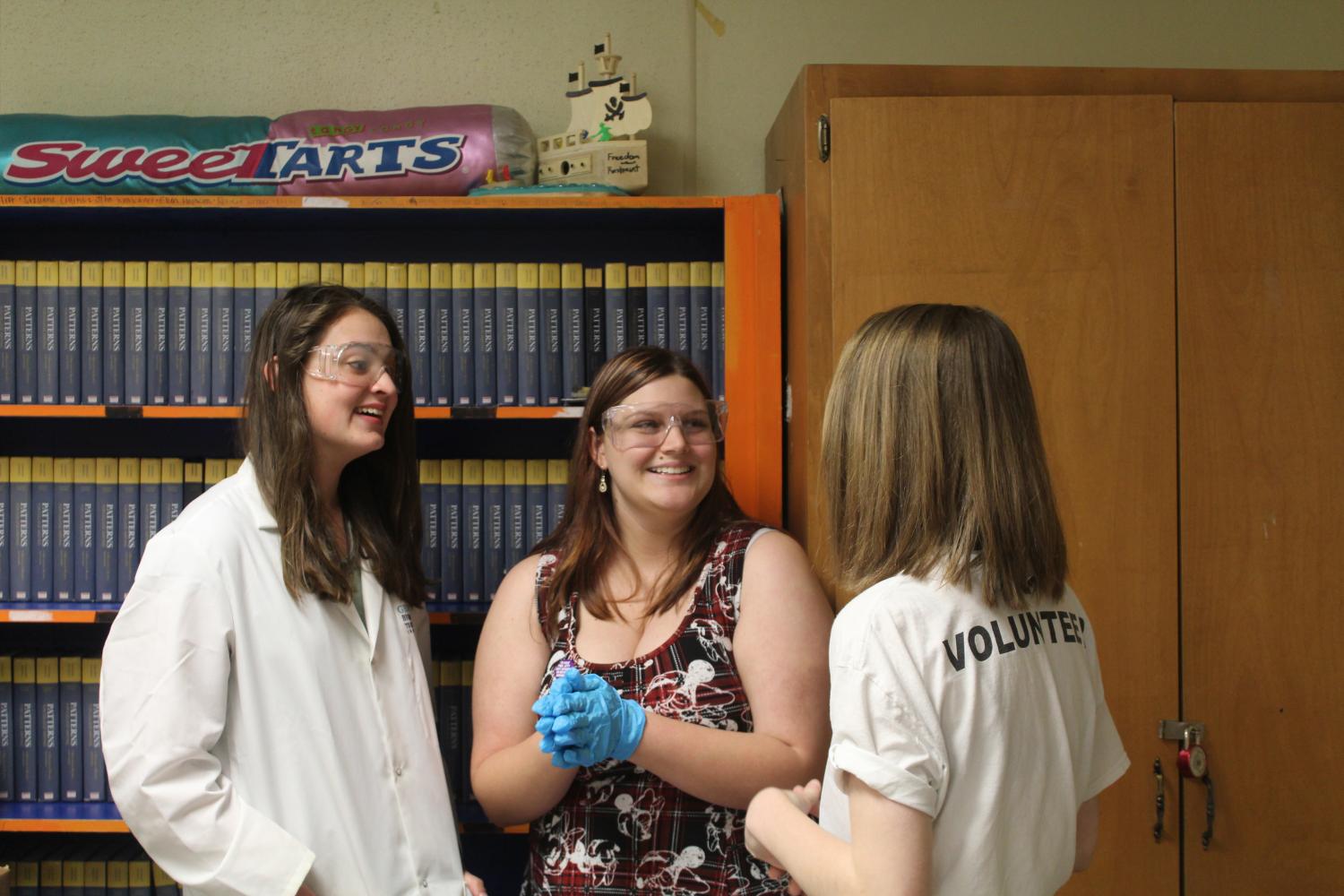 Senior Brittany Ent always adored animals from a young age. As a child, she read books about animals and physiology, always wondering about the biology of animals. In the third grade, her passion and curiosity expanded even more with her teacher, Mr. Hardy of Mableton Elementary.

Exotic pet store animals such as a cockatiel, a king snake, a tarantula, and a gerbil filled Hardy’s classroom and Ent bonded with all his intriguing animals, especially the snake, after moving her desk to their cages.

Fortunately for Ent, she never experienced discouragement from others for pursuing and loving science. Her passion for science runs at such a strong level that at this stage in her life, no one could discourage her passion or try to steer her away from biology, even when furthering her education in college.

“My love for science has grown to the point that no one could even attempt to change my mind,” Ent said.

Science, Technology, Engineering, and Mathematics (STEM) fields gained increasing attention over the past three decades. More than ever, society needs more scientists, engineers, and mathematicians. Males dominate the industry, leaving women in the dust. Up until recently, and sometimes still seen today, society discouraged women from entering the STEM field and claim they would not understand the science and math behind the work.

Junior Abbey Milwicz also experienced a similar passion for science as Ent and grew up surrounded with influential women in science.

Her mother works in IT in two hospitals and her grandmother worked as a bacteriologist. These influential women helped foster her interest in science and provided her with a supportive foundation.

Milwicz’s interest, however, truly started to bloom during her freshman year at NC. That school year, both her grandparents passed away, and doctors diagnosed her with polycystic ovary syndrome (POS) and a concussion, causing her to spend time with doctors. She then took initiative and researched the topics that affected her and after learning all the information about herself, she could not pull away.

Multiple groups, including Girl Scouts, began programs to encourage young girls to explore STEM and keep those girls interested in STEM on the right path to success.

Senior Courtney Wadley, in order to obtain her Gold Award for Girl Scouts, spearheaded a STEM event for elementary school girls called STEM-palooza. Wadley funded the event and held it at NC. It allowed elementary Girl Scouts to explore multiple science experiments such as soda in Mentos and dry ice.

“I actually planned this event because I knew not every girl has a positive experience with STEM when they are younger,” Wadley said. “That’s why there is such a discrepancy of girls in STEM fields today. Equality is why it’s important to keep girls interested in STEM. Women will never truly be considered equal to men until we are equally represented in the workplace.”

Since the feminist movement in the 1960s, more women entered the workforce than ever before. The revolution allowed them to make strides in multiple career paths, especially science and math. 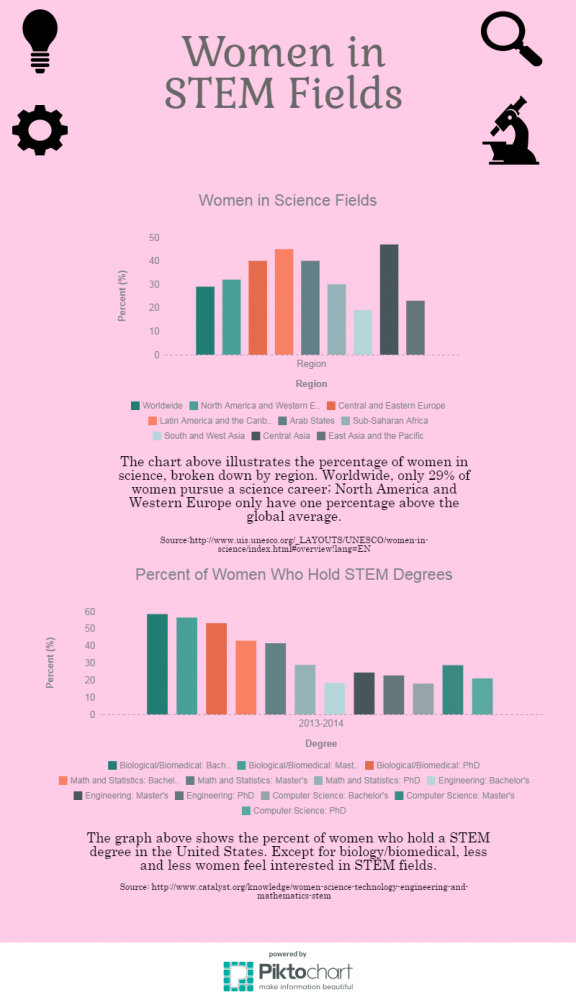 Although women make up half of all college graduates in the United States, only 29% of women pursue a STEM degree or career. The amount of women in medicine, law, and business continue to increase each year, yet female scientists and engineers remain low compared to their male counterparts.

Slightly less than a third of women in the United States leave their STEM jobs after one year due to isolation, hostility in the work environment from male colleagues, and ineffective executive feedback.

With this in mind, young girls, whether interested in STEM or not, hear these unsettling stories of women leaving the STEM field which can discourage and shape their interest. Words and actions of adults and role models mold children and help form their worldview. If children hear women do not enjoy working in the STEM field, girls’ representation in STEM will decrease and children will believe girls do not belong in STEM.

As young as six years old, children begin to develop a sense of gender identity, meaning one’s development of his or her gender. Society, through family, peers, media, and toys only enforces a child’s gender identity. Due to gender stereotypes and bias, many young girls in late elementary school and the start of middle school steer away from STEM and develop an interest in more female focused careers such as teaching, acting, or raising children at home.

Girls’ own stereotypes tend to debilitate them even more. Comparing girls and boys’ math test grades, the scores showed no significant differences, but when asked how they thought they perfromed, girls felt that they did worse and lacked the mathematical ability. Girls believing they do not possess the mental ability to complete math and science tasks leaves the future of society in disarray.  If girls lack the confidence to complete difficult math problems, they will start to lose interest in STEM and feel discourage to pursue their interest.

The media and television also reinforce the idea of gender roles and discourages girls to enter the STEM field. Shows like Powerpuff Girls, where the Professor created the crime fighting little girls in a chemical accident, shows the girls themselves never received encouragement to enter the field.

Furthermore, Sid the Science Kid, a PBS kids show that follows the intriguing questions of Sid, focuses on the adventures and discoveries of the boy who has an interest in stand up comedy.  Although the show demonstrates the child  feels curious about many topics, he discourages his younger sister from joining his adventures. Becauses children’s minds absorb everything they see, young girls and boys may interpret that girls should not pursue math and science and only boys can handle and understand the material.

“Unfortunately, TV, books, everything promotes boys, but they don’t promote girls. So it’s important for girls to know that they can do just the same as boys do,” Chemistry and Advanced Scientific Research teacher Nena Tippens said.

Recently, however, more girls and young women began entering the STEM fields. Between family, friends, teachers, and activities for girls, more girls developed a passion for science and math and began pursuing their interest.

In the past few years, TV channels started promoting STEM to both girls and boys. PBS Kids now shows a series called SciGirls, an informational show designed for eight to twelve year olds illustrating how girls can apply science and engineering in their everyday life. Each episode follows a different group of tween girls who work to discover the answer to their burning questions about science.

Movies about women’s achievements in STEM also began making waves and inspiring girls across America to experiment with STEM. Oscar-winning film about the women of NASA, Hidden Figures, informs young girls, especially girls of color, to start and continue their interest in STEM. The movie also shows the challenges the women faced due to their race and gender; Katherine Johnson, Dorothy Vaughan, and Mary Jackson worked in the segregated West Area Computers and faced prejudice each day.

“The movie Hiddens Figures has educated me more about women in the STEM field and how far we’ve come. Right after watching it in theaters, I became even more excited for my future and how much I could change the world for the better,” senior Audrey Widmier said. 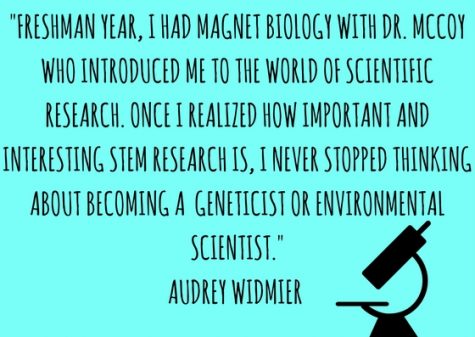 Young girls’ parents set up a safe and supportive environment for their daughters to flourish in the STEM fields and expose them to as many career options as possible. According to a survey conducted by the Girl Scouts of America, 96 percent of girls interested in STEM said their mother would support them in a STEM career and 95 percent of the girls said their fathers would support their decision in STEM. 92 percent of girls also said their parents believe they possess the ability to do well in STEM.

“My mom works in IT at two hospitals and my grandmother was a bacteriologist so I’ve been around STEM fields. Its accessibility has really allowed me to pursue my interests,” Milwicz said.

Science teachers around Cobb County encourage girls to work towards a STEM career and to not let anyone discourage them from being a scientist, mathematician, or engineer. Teachers touch lives forever, for better or for worse, and spending a semester with a teacher who feels passionate about his or her subject makes an impact on students. His or her passion can spark other students to pursue the career and the teacher can provide the encouragement needed if no one encourages the child at home.

“The first teacher I ever had who helped push me in the STEM direction was my third grade teacher, Mr. Hardy,” Ent said. “He had several animals in his room and he let me move my desk to be near them and right next to his pet snake. This deepened my interest in biology because I not only loved all the animals, but I wanted to understand their physiology. Dr. McCoy, my ninth grade Magnet Biology teacher, was also greatly influential because he was so passionate about biology and science.”

79 percent of girls interested in STEM felt their friends would support their interest and passion for STEM. Especially during teen years, girls rely more on their friends and their beliefs than their parents, and when a girl’s friend disapproves of an interest or career path, the girl will abandon this idea. But when girls support one another, they can pursue their lifelong career.

“Follow your heart. It’s a long road ahead and there’ll be a lot of obstacles to overcome, but you’ll only ever be happy if you’re doing what you love,” Milwicz said.

Many girls do encourage their friends’ passions and allow them to follow their dreams. Experiencing this sense of security and support will allow girls in STEM to fulfill their wildest dreams.

“Young girls interested in STEM ought to pursue it. I do not see any reason anyone should stop you. Pursuing what you love and believe in is one of the few things you can actually do in this world that is likely to bring you happiness, and no one should be able to influence you otherwise,” Ent said. 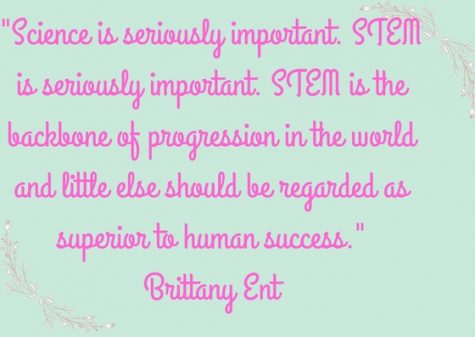