Taylor Swift steals the mic back 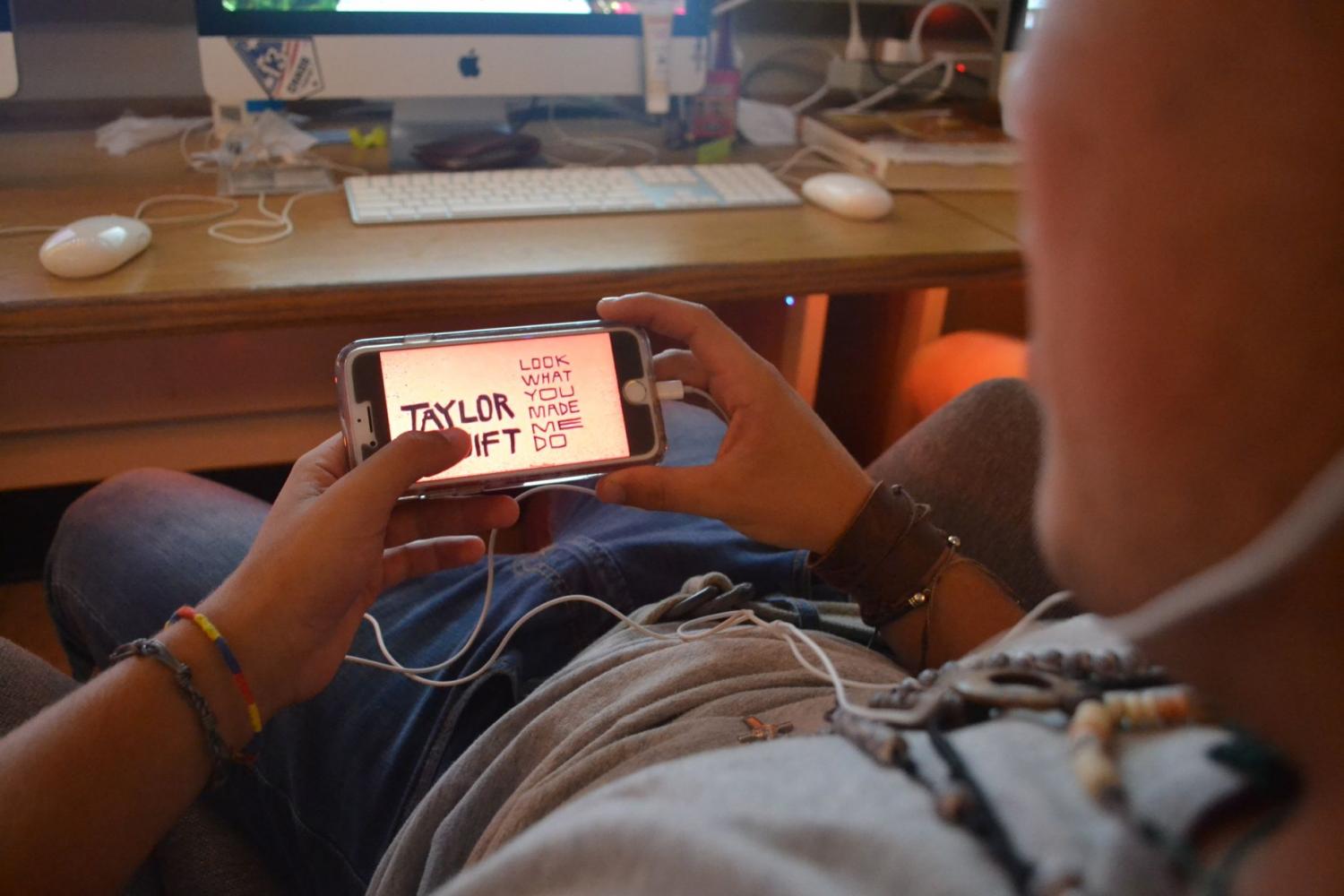 Taylor Swift fans avidly watch the new lyric video of the hit single in hopes of learning it as the tune grows in popularity. The pop singer recently released the new single and already sits at the number one trending song on YouTube.

Shaking up the music world once again, Taylor Swift released her new single, along with the release date for her upcoming album Reputation on August 24th. As people sit and wait for the full album to come out on November 10, the song “Look What You Made Me Do” remains the #1 trending video on YouTube. In only ten hours, the lyric video received 577K likes and 5.5 million views. Swift recorded the song through Big Machine Records, and Jack Antonoff co-wrote and co-produced the song.

“I love Taylor Swift so much. Her music is so fun, and the new song is something I did not expect. She’s trying out something new, and it’s amazing. She deserves all the popularity because her music is a perfect blend of pop and dance. She’s like my guilty pleasure,” senior Jordan Hicks said.

Swift shows signs of new influences in her music style, such as Lorde and Katy Perry. Similar to the snapping in “Royals” by Lorde, the piano tune in Swift’s single possesses the same mystical value. Unfortunately, Swift tries incorporating Lorde’s sound into her song, but fails to make it her own. The song shows an entrance to a possible gothic phase, but it also seems Swift tries to keep up with the popular sound on the radio. She manipulates part of the song to represent a phone call and says the lines “I’m sorry/the old Taylor can’t come to the phone right now./Why?/ Oh, ’cause she’s dead!” This line emphasizes that Swift does in fact want to turn over a new leaf and try out a new side.

“I like the new song because it seems like a grittier and less goody-two-shoes kind of direction. I think she is trying to break away from writing about just love and relationships,” English teacher Jenna Essenburg said.

However, the new song does keep up with the trend of beat drops between the verses and chorus. Unlike the Chainsmokers, popularly known for their beat drops, Swift does not completely capture the musical element of the drop. The drop in her song, rather than adding to the sound, takes away from all the original sounds.

“The song does get very repetitive towards the end. Maybe if she added some more lines into the chorus it would sound better, but don’t get me wrong, I still love the song,” Hicks said.

Taking a deeper dive into the lyrics, they reveal an evident correlation between one infamous feud in the music world. Taylor Swift and Kanye West started an emotional feud in 2009, and it shows no signs of stopping. The love-hate relationship started with the rude interruption of Swift’s acceptance speech for Best Female Video award at the MTV Video Music Awards. West stood up, snatched the microphone from Swift, and uttered the notorious words “Yo, Taylor, I’m really happy for you and I’mma let you finish, but Beyoncé had one of the best videos of all time. One of the best videos of all time!” West could not contain his jealousy, so he made the choice of embarrassing Swift, Beyonce, and himself.

“Being jealous always bites people in the butt, and I think it was so mean for Kanye to let it out and be so rude to Taylor. He didn’t have to do it in front of thousands of people. Really Kanye?” junior Maggie O’Bryan said.

The two artists took multiple slashes at each other with the popular hits “Innocent” by Swift, “Famous” by West, and “Bad Blood” by Swift. West’s song used much more demeaning phrases than Swift’s; she still only looks for an apology after West ruined her special moment. Months later, Swift’s reputation seemed tarnished after Kim Kardashian, West’s wife, leaked a phone call confirming that Taylor approved West’s derogatory terms he referenced to her in his song “Famous.”

“Look What You Made Me Do” shows signs of yet another stab at the situation by including lyrics such as “I’ve got a list of names and/yours is in red, underlined/I check it once, then I check it twice, oh!” and “The role you made me play/Of the fool, no, I don’t like you.” After eight years, we thought the feud would end, but all signs point to Swift starting more drama.

“I’ve been mad at my friends before, but eight years is a bit much. It kinda shows how immature Taylor and Kanye both are. Like, please move on from this craziness, your fans are getting annoyed,” junior Mahogani West said.

Taking in all the different aspects of the song, it showcases a new and different side of the former pop-country singer. Taylor Swift entertains her fans no matter what, and millions of people wait eagerly for the new album to come out on November 10. You can pre-order the new album Reputation from iTunes, Target, Walmart, and Taylor Swift’s online store.

Overall, Swift achieved her goal of impressing her audience, but if the old Taylor could answer the phone, I would prefer listening to her.