Warriors squeak out win in overtime against Pebblebrook 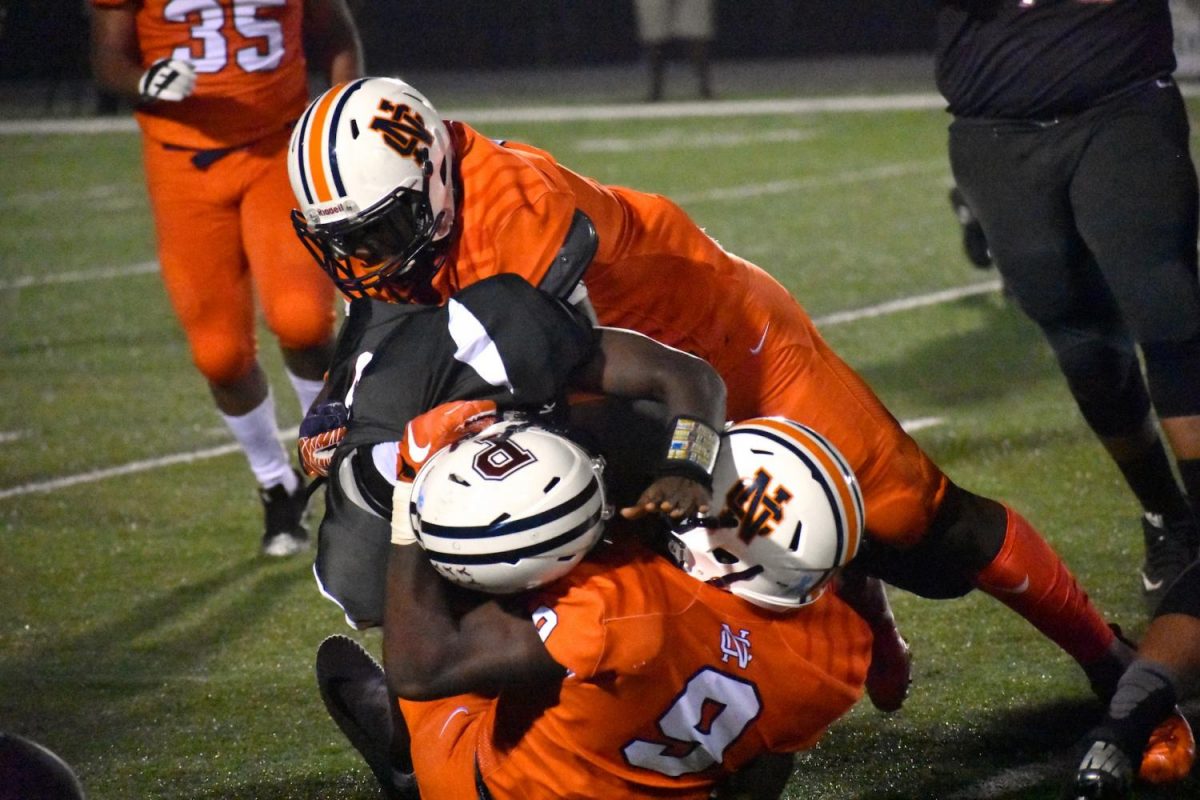 Before the break, the Warriors took on the Pebblebrook Falcons in their fifth game of the season. NC defensive end Thurman Geathers (#9) and offensive linebacker Trey Urquhart (#1) tackle Pebblebrook quarterback Jaquavious Jones (#1) before he can rush five yards. The team expected an easy win, as senior linebacker Christophe Cesar said, “We’ve beat them every year I’ve been on the team, so I don’t know why it would change now.”

The NC Varsity Football Team edged out a close 27-24 victory against the Pebblebrook Falcons on September 22nd. This win brings the Warriors to 4-1 on the season, with region play about to begin this coming week. NC lost their first game of the season on September 15th to the East Coweta Indians in a dramatic 36-35 score.

The 36-35 loss against the Indians came from miscues on special teams and defense. Missed tackles allowed for the Warriors to give up two kickoff returns for touchdowns, and a stagnant defense gave way for the Indians offense to connect on multiple 20+ yard touchdowns. The Warriors definitely needed to make some improvements, and they did, leading them to a win against the Pebblebrook Falcons.

After the Falcons scored early in the first quarter, junior running back Daniel Hart ran for a 25-yard touchdown to tie the game at seven points.  After this score, both teams put up zeroes for the remainder of the half.

The Warriors took their first lead of the game when senior quarterback Dillon Waye broke free for a six yard touchdown run on the opening drive of the second half. He connected on 13 of his 21 passes and finished the game with almost 200 total yards.

Junior running back Christian Singleton found the end zone off of a 58-yard screen pass from Waye to extend the Warrior’s lead to 21-7 halfway through the third quarter.  The Falcons then shut out NC in the fourth quarter, resulting in a tied score of 21.

The Falcons faltered and gave the Warriors a chance to take the lead late, but the Pebblebrook defense stood strong and forced a punt from junior kicker and punter Anthony Rodriguez. The Falcons drove their way down into field goal range and tried to win the game off of a last second field goal. They connected on their first attempt, but Coach Shane Queen called a timeout right before the kick, forcing more pressure to build up on the Falcons kicker. On the next try to win the game, NC blocked Pebblebrook’s field goal, which sent the Warriors into their first overtime game of the season.

“It [the blocked field goal] meant a lot to us. It gave us the momentum we needed going into overtime,” senior linebacker Christophe Cesar said.

NC chose to defend the first possession of overtime and held Pebblebrook to only a field goal, which meant if the Warriors scored a touchdown on their next drive, they would win the game.

Sure enough, the Warriors pulled through for the victory when Singleton broke free with the winning, rushing touchdown, his second of the game.

The Warriors start region play on Friday, October 6th against their rivals from McEachern at Emory-Sewell Stadium. Kickoff will occur at 7:30.

“Every time we play McEachern, it’s always a close game, but I think we have more talent than them this year. We’ll beat them by a touchdown and a field goal,” senior Alex Llamas said.