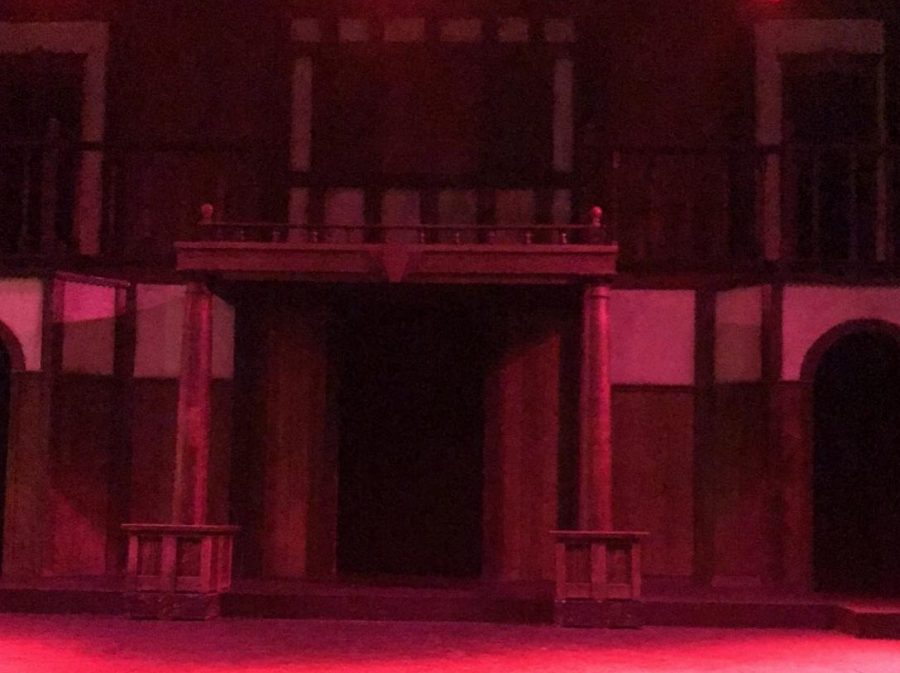 The Shakespeare Tavern’s stage, modeled on an Elizabethan theater, hosts the Atlanta Shakespeare Company’s productions. For Macbeth, the company covered the stage with fog and eerie lighting.

From Friday, October 6, through Sunday, October 29, the Atlanta Shakespeare Company performed its rendition of William Shakespeare’s classic tragedy Macbeth at the players’ longtime Peachtree Street venue, the Shakespeare Tavern. Set in medieval Scotland, the play depicts the rapid succession to and from power of the general-turned-king Macbeth, who believes himself destined for greatness when a group of witches promise him the kingship. Resorting to ever-increasing levels of violence and tyranny to gain and keep power, Macbeth ultimately finds himself betrayed by his own ambition and unshakeable faith in the witches’ prophecies. The tragedy’s themes of witchcraft, mystery, and intrigue make it an ideal fit for Halloween.

By and large, the company pulls the play off with flying colors. The actors, especially Matt Nitchie as Macbeth, Troy Willis as Macduff, and J. Tony Brown in a wide array of roles, give thoroughly convincing performances, with the characters’ chief emotional moments resounding deeply with the audience. In a particular moment of brilliance, Nitchie’s choice of a subdued, quiet delivery for the famous “Tomorrow and tomorrow and tomorrow” soliloquy departs drastically from the raw, impassioned speeches seen earlier in the show. With this choice, he displays both the deep depression into which Macbeth falls and the chilling apathy brought about by the constant violence to which he accustoms himself. Through such moments as this, the acting becomes the standout of the performance.

Props and theming also excel in the production, though missteps do present themselves. Costumes look well executed throughout the play, and the witches’ cauldron rises mysteriously from the stage in a particularly eerie special-effects tour de force. In terms of sheer fright potential, however, Banquo’s ghost tops everything else in the performance, glowing and glowering so convincingly as to induce terror not only in Macbeth, but in sizable parts of the audience. Granted, the heads emerging from the witches’ cauldron look too obviously fabricated to count among the night’s effects highlights, and with the exception of the cauldron and certain potion ingredients, the witches’ costuming and props in general tend to leave some room for improvement.

Overall, the effects produced a genuine atmosphere and scares enough to fit the spooky season admirably.

With this and the Shakespeare Tavern’s intrinsic additions to the experience, such as the realism of the quasi-Elizabethan stage design and the extensive dining options, the Atlanta Shakespeare Company’s performance of Macbeth serves as an excellent alternative to haunted houses, horror movies, and other more traditional Halloween pastimes. Although imperfect, the show does more than sufficient justice to Shakespeare’s masterpiece, and it comes highly recommended.