Band marches through 2017 with “Embellish” 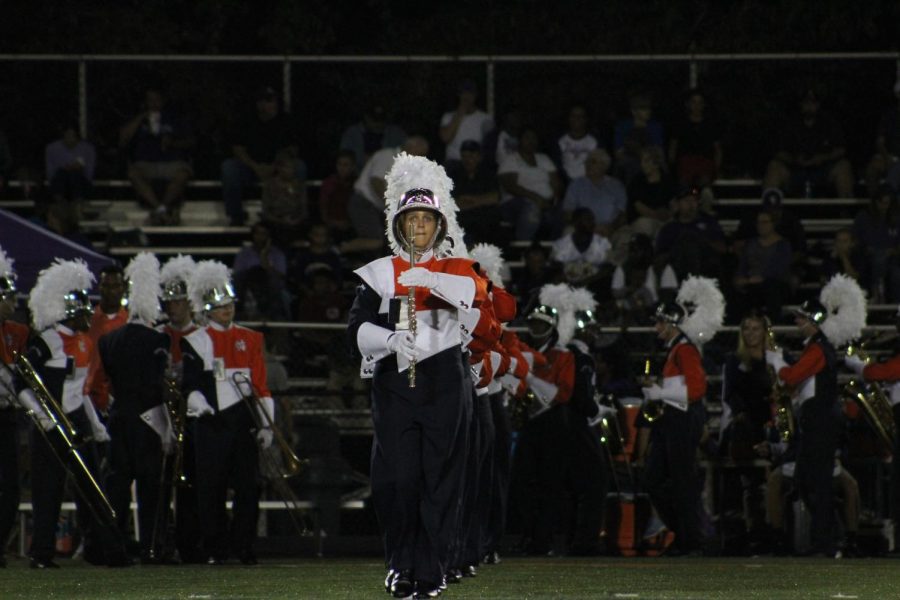 NC band members marches onto the field to perform "Embellish" for the crowd. Their bell-heavy piece features props, costumes, and aerial stunts by the colorguard.

This season, NC’s marching band took on a show structured around a single, distinctive instrument: bells. The performance sought to capture that instrument’s unique appeal throughout the long evolution of Western music.

“This year’s theme for the 2017 season is ‘Embellish,’ and that’s a play on words: EmBELLish,” senior trombonist Jordan Johnson said. “It’s pretty much bell-themed, so most of our songs have bells, and there’s some Christmas stuff. The first piece that we start off with is ‘Hunchback of Notre Dame,’ and then we go into the Pentatonix version of ‘Carol of the Bells.’ After that, we have a trombone feature, and that’s where we play ‘Till There Was You,’ and then last we have ‘New Century Dawn’ by David Gillingham.”

Although the music comes from a variety of different styles, all the songs put focus on bells in their arrangements, and all resulted in an emotional effect.

“The music itself is really impacting and I love it,” junior clarinetist Gina Trotta said. “There are those times where we have such big moments, where we have a big hit like in the beginning of ‘Bells of Notre Dame,’ and it makes people want to listen.”

In addition to the music, the band’s 2017 show prominently featured an impressive aerial display by NC’s Colorguard.

“We have a flyover, and it’s pretty neat,” Trotta said. “We may have had a flyover before, but this one is really exciting.”

The experience also heavily stressed the bell theme visually, incorporating bells throughout the design of the performance. Thus, both sight and sound formed important components of the band’s presentation.

“Throughout the show, we’ll see a lot of bell props. We have a bunch of bell props in the background, and we have a big bell stage, and the bell is really focused on in this show,” Johnson said.

The songs showcased in “Embellish” reflect a wide range of styles, including celebratory holiday music from various time periods, a romantic Broadway standard in “Till There Was You,” and more traditional marching band fare in “New Century Dawn.” These songs displayed the band’s ability to demonstrate the versatility of the bell as an instrument throughout history.

“I really like this show. I think it has a lot of good music, and since I play trombone I’m really happy since I’m in the feature. When the band comes in, it just really blends together and makes it very powerful,” Johnson said.