Peachwood: The Hollywood of the South sizzles 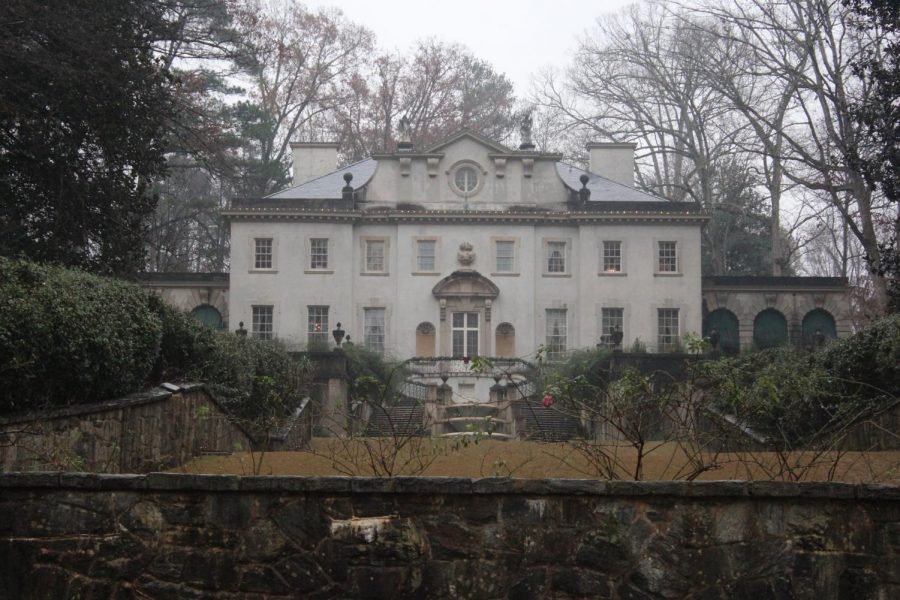 Surrounded by 22 acres of land, The Swan House, used as President Snow’s house in The Hunger Games MockingJay Pt.1, originally opened to the public in 1967.

In less than a decade, Atlanta has become one of the top cities for film and television production, often being called the “new Hollywood.” With cheaper production costs, sprawling cities to take over for sets, and a hefty tax incentive, Hollywood stars flock to ATL to film and produce.

“Atlanta is different compared to other cities because of the diversity. It’s a large city, not the largest I’ve been too, but certainly pretty big, and definitely the scenery, It’s beautiful here, especially while filming at Stone Mountain,” set designer Dawn Hopper said.

Atlanta has continued its meteoric rise in the film industry, providing a backdrop to numerous movies and shows like Captain America, The Hunger Games, Remember The Titans, Let It Shine, The Vampire Diaries, The Originals, Stranger Things, The Walking Dead and more.

“I have been in Hidden Figures as one of the computer women. As a result, I ended up in Time Magazine. I was also in Finding Steve McQueen as a hairstylist, which hasn’t came out yet. I have two films coming out that will appear on STARZ,  one called You Reap What You Sow and the other called Love at any Cost,” actress Artricia Lorjuste said.

The Netflix series Stranger Things uses the Atlanta metro area as a stand-in for Hawkins, Indiana. AMC’s Halt and Catch Fire  moved its characters from Dallas to the Bay Area without its production ever leaving the Southeast. In addition, Marvel’s interconnected franchise stays in Atlanta even as superheroes cross the world on screen, while the Hunger Games used local landmarks like Atlanta’s Swan House and MARTA train for its vision of the post apocalyptic scenery.

In Hollywood’s eyes, people traveled South because of the weather, diversity of restaurants, and that fabled “Southern hospitality.” However, as Atlanta grows as a city, so does the production of numerous films.

The second, third and fourth installments of the Hunger Games series were shot in Atlanta. Covington, Georgia, approximately 30 minutes East of Atlanta, houses the town behind the supernatural show, The Vampire Diaries. During filming, the set designers transformed the town into the fictional Mystic Falls, Virginia and used nearly every exterior shot.

“ When it comes to set designing, it depends on the characters and production company. Sometimes actors have a say, sometimes it’s the directors. Sometimes we are all on the same wave, sometimes I have control, sometimes I’m metered and watched,” designer Hopper said. “With 17 projects in 2016, the first ranked “Peach State” hosted nearly three times as many feature films as New York and Louisiana.”

Opportunities for aspiring actors and actresses increase daily as yellow signs with set markers pop up around local towns. Jennifer Aniston most recently visited Marietta’s Civic Center to film for Dumplin, set to premiere in 2018.

“There’s different casting companies, producers, films, independent films here that are easily accessible. I want to say that that it is better financially to begin and grow your career as an actor here [Atlanta] rather than in New York. Music videos are shot here, a lot of artists live here, so that’s going to give you more opportunities for movies, TV, and videos. I feel like L.A and New York is great if you already have a name for yourself, but if you’re upcoming, Atlanta is the place to be,” Lorjuste said.

In 2008, Georgia began offering 20% tax credits to production with at least $500,000 production budget. If producers showed the Georgia logo at the end of the credits, the state would increase their offer by 30%.

Productions receive a 20% tax rebate for filming in the state, with an additional 10% tacked on for including Georgias “Peach State” logo in the credits, Georgia and Kentucky both received studio offers of 30% for filming there.

“Its really nice to be prepared to take advantage of the opportunities presented to you. You have to be ready,” Craig Miller, chair of Georgia Entertainment Commission said.

However, more studios have been ditching the sound stage and filming on location, and as a result, Atlanta has become a major film mecca. According to project casting.com, 37 television shows and movies have begun to film in Georgia since November 2017 (last month). That number includes sequels to Jumanji, and The Avengers, as well as reboots of 24 and Macgyver. Georgia now ranks 3rd among popular film locations in the U.S., right behind California and New York with over 3,000 motion picture and television businesses.

According to the Georgia Department of Economic Development, in 2013, production companies spent $1.7 billion on the 248 projects, a 500% increase from 2008.

“The rapid growth of the film and television industry in Georgia, and the state’s steadfast commitment to its support is remarkable,” Miller said.

According to Film L.A., Georgia hosted more feature film productions than any other market, which includes the U.K., New York, and California in 2016.

“There are a lot of people that say to me, ‘Well you were in New York.’ That’s a big place for them. But the thing that makes it easier here is that you don’t have to drive that far, so it’s less costly. The train ride in New York from where I lived in New Jersey would be $60 a day, and you only make $100 as a background actor before you become a main actor which takes time. Fortunately I was able to build that up here without having to pay $60 a day. Instead I would probably just pay $20 for gas. The rise to the top is more affordable here rather than in New York,” Lorjuste said.