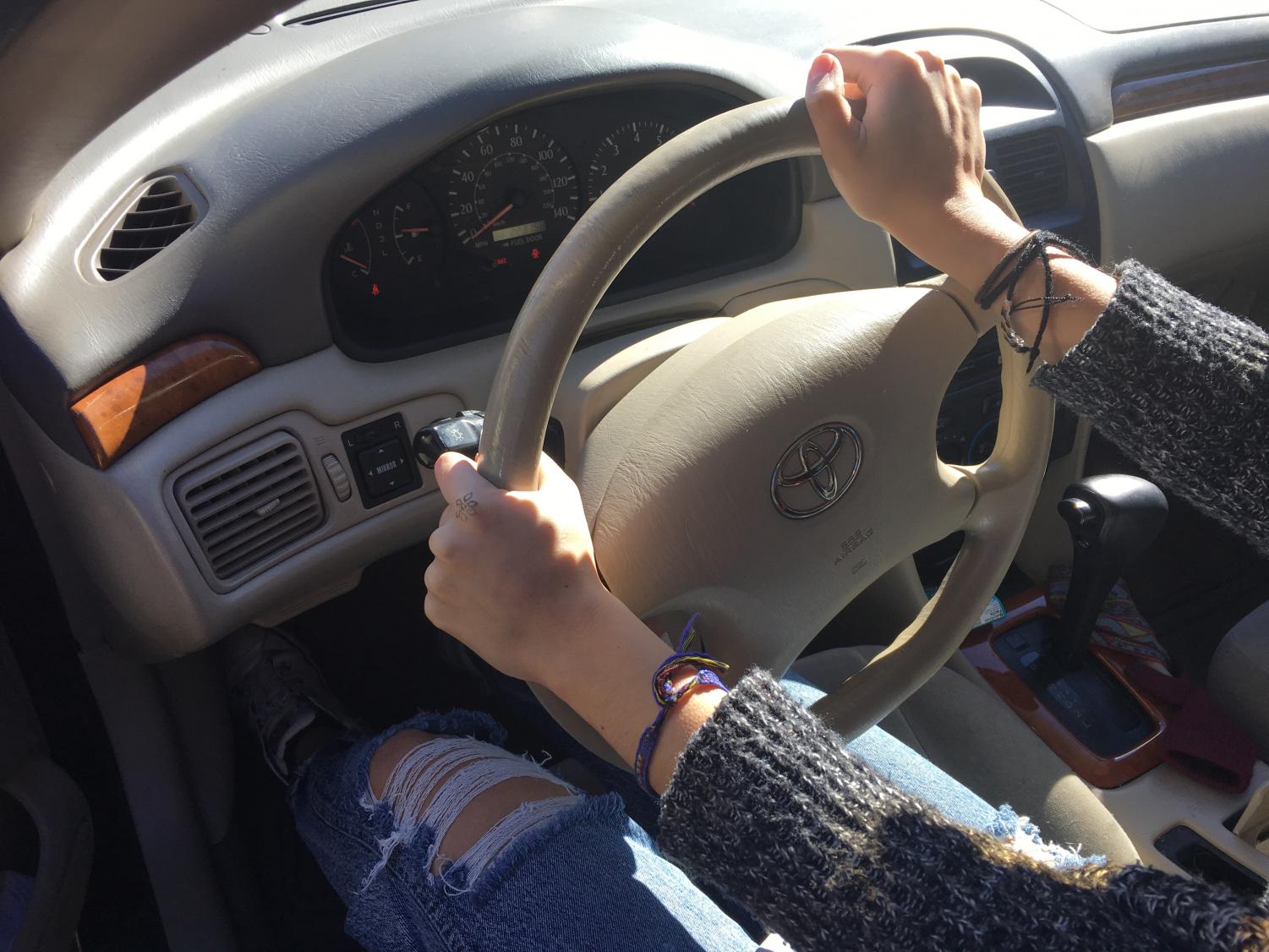 Ready for the road? Teens rush for driver’s licenses, permits

Teens see acquiring their driver’s license or permit as an integral milestone of a high school experience.

Driving often serves as an escape and allows young people to gain freedom and exercise independence from their parents. Learning a such powerful and complex skill conveys responsibility and maturity to their peers.

Usually, students obtain their learner’s permits right at 15 and choose to forgo getting their license one year and a day after their permit upon turning 16. Instead, many in recent years ultimately procure their license later, around 17 or 18 years old.

In recent years, it would appear that students opt to start driving as soon as possible in order to transport themselves to work, school, and extracurricular or recreational activities. According to a survey of students aged 15 to 18,  82% of them claim that they wanted their license so early because they simply wanted the freedom provide themselves with transportation.

Certain students though, like sophomore Lauren Ondieki,  chose to wait to start driving.

“I’m waiting because I just don’t think I’m ready for that big responsibility yet,” Ondieki said.

A number of different reasons can influence a teen’s decision to wait for their license. That same survey showed that 48% of them wanted  their license or permit immediately but pushed if off for a variety of reasons and factors. 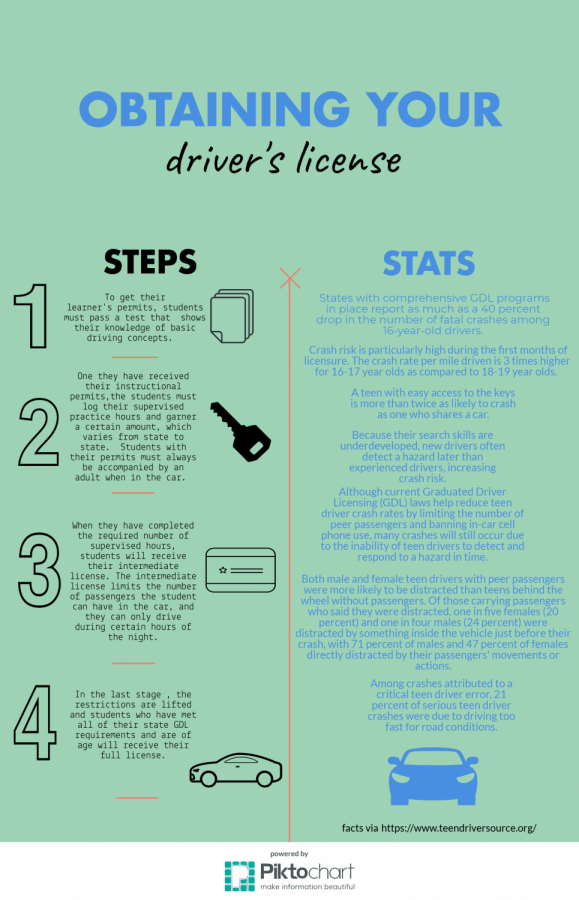 Erin Grier
“Many parents are waiting for their teens to reach 17 before they get a license. I think it’s because of all the distracted driving,” Melody Gullett, a specialist at Just Driver Training in Canton, Georgia, said.

The risks teenage drivers face might just outweigh the benefits. Today’s tech savvy teens have trouble keeping their eyes on the road while simultaneously keeping their hands off of their phones. Distracting passengers, speeding, impaired driving or driving while under the influence of alcohol, and the careless neglect of seatbelts all contribute to rising statistics showing that fatal crashes among drivers between the ages of 16 and 19 will  occur three times more than with adult drivers.

“I think once they go through a class and they get behind the wheel it starts to become very real that they have control over this car, but this car can become a deadly weapon,” Jennifer Marletta, the Driver’s Education Specialist at the Marietta Community School, said.

A lack of driving experience proves equally dangerous.  For this particular reason, in 1997, Georgia legislators established The Teenage and Adult Driver Responsibility Act (TADRA), a rigorous program created to give young drivers more experience in a lower risk setting and fully prepare them to drive. Driving schools provide young drivers with guided experience and real-world situations to navigate through. 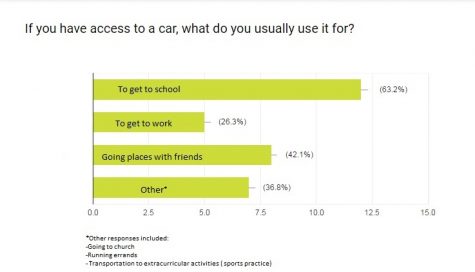 In an anonymous survey administered to high schoolers on their experiences with driving, one student commented: “The Driver’s Ed process was incredibly boring to get through, but the portion in which you drive with an instructor was immensely helpful, and I most likely would not be driving without that experience.”

Though these programs produce informed and smart student drivers, countless teens may still lack the significant amount of confidence needed to start driving on their own. Driving requires mental, physical, and emotional readiness. The manner in which teens drive depends on various, specific factors, including social demographics, perceived environment, and the driving environment itself.  57% of high schoolers said they did not obtain their permit because they were nervous to start driving.

Not having access to a car may also hinder the young drivers from garnering driving experience. 55% use a parent/guardian’s car  for transportation, and only 25% actually owned their own car. The other 20% stated that they shared a car with their siblings. Doing so allows teens to split the costs of gas, insurance, and occasional maintenance fees. Students who share a car with a sibling or family member show a lower crash risk than someone’s with easier access to the keys.

Parent involvement provides stability and support to new drivers.  Studies show teens whose parents remain present during their early  driving experience are more likely to wear their seatbelts when the begin driving on their own. While the style of the parent may vary, a teen’s learning encounters can depend on it. More lenient parents do not  show their children the accurate level of encouragement and authority that they need to succeed.

“They [ the parents] are the extension of the training. They have to give, by law, 40 hours of supervised driving with their teenager before they are allowed to get a license,” Gullett said.

As teenagers continue to psychosocially develop, their high energy levels can affect their driving.  Recent studies have shown that reckless or accident-prone young drivers have lower levels of a stress hormone called cortisol. High schoolers learn to drive at an age where they continue to grow as individuals and figure  out their identities while cultivating relationships with their peers. Personality and behavioral development can play a major role in when students choose to start driving and their habits on the road. 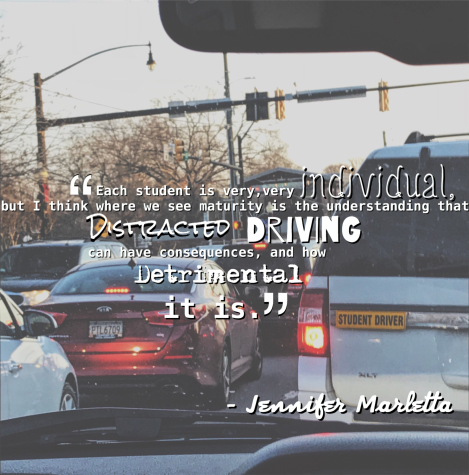 Erin Grier
“I think the majority are very naive when they come [into the program], and as they start moving through they start realizing the magnitude of responsibility that they have behind the wheel,” Marletta said.