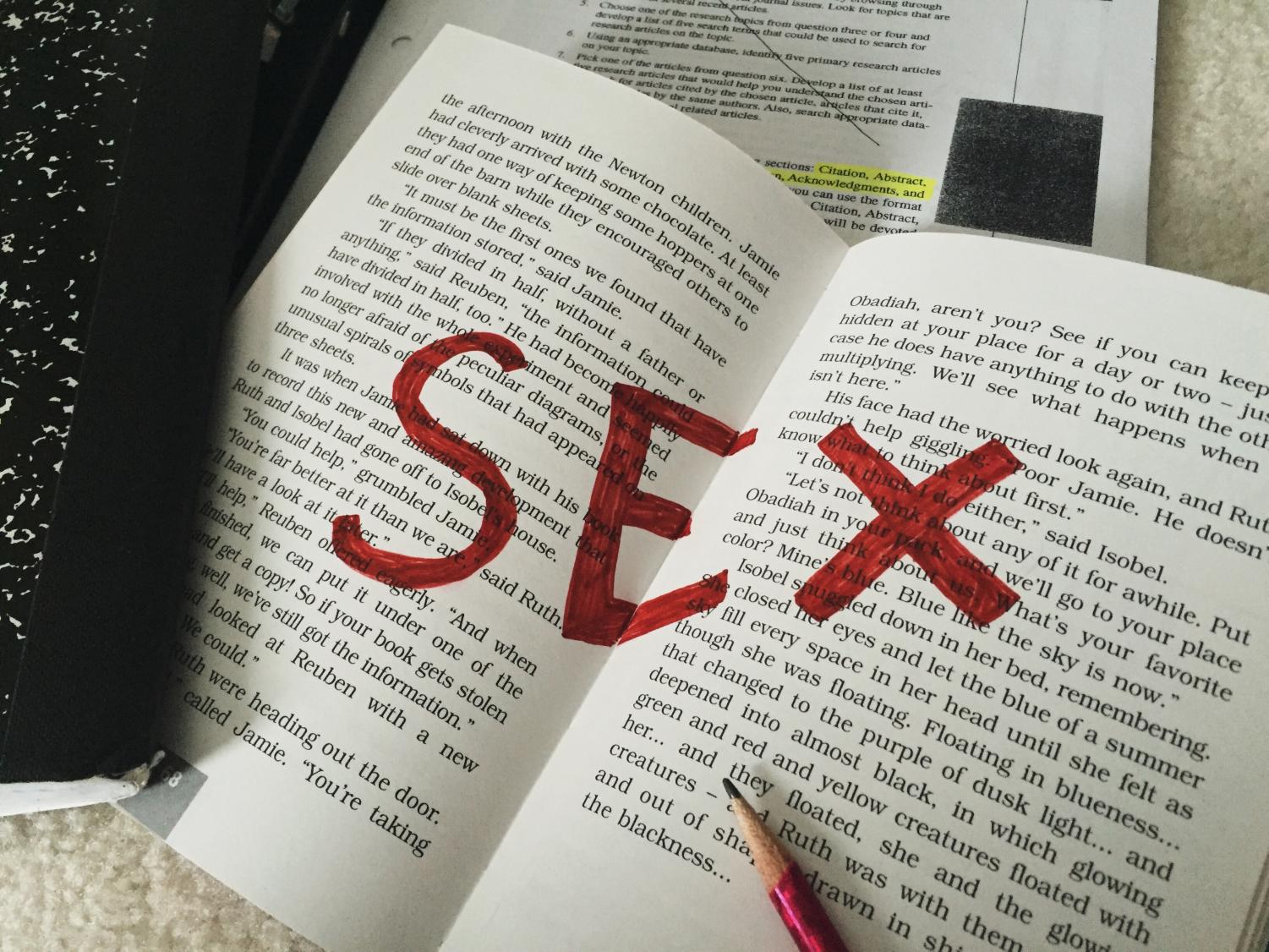 Sexual health exists as an essential unit in a typical health class required to graduate, and yet students often leave more confused and unsure about sex education. What should and should not be discussed in sex education? (Tara Anastasoff)

Sexual health exists as an essential unit in a typical health class required to graduate, and yet students often leave more confused and unsure about sex education. What should and should not be discussed in sex education?

Sex education serves as a taboo topic and the school system’s biggest mystery. With sex a hot topic in both politics and the media, it comes as no surprise that educators scratch their heads on how to best educate their students. Twenty-five of the fifty states enforce an abstinence-only approach to sex education for their students, while others take on a more comprehensive approach, emphasizing safe sex instead of no sex at all.

“Having taken health class my junior year of high school, I was a little late to the sex education party. I feel that it’s vital for students to learn sex education at an early age so that they’re prepared for when the time comes, but above all else, the information that students are being taught should be accurate so that they can decide competently and consider all of the factors,” junior Harrison Haley said.

“The teen years are known to be the experimental years of your life, but teens need to understand that sex is a short-term decision with potentially long-term consequences,” sophomore Maddie Nicholas said.

With new experiences and new opportunities around every corner, the mind of a teenager wanders far past school and its seemingly never ending due dates and tests to parties, drugs, and sex. 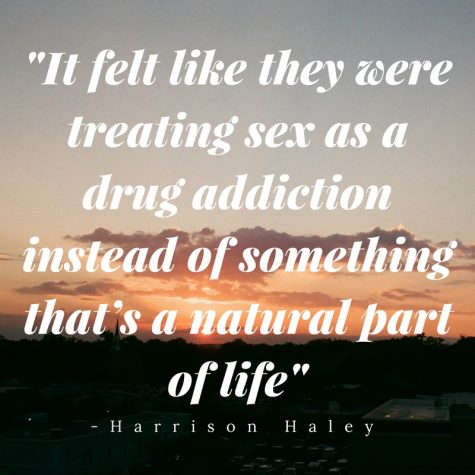 Tara Anastasoff
Even though high schoolers fall under the impression that their peers participate in sexual activities, studies show that only 42 percent of girls and 44 percent of boys between the ages of fifteen and nineteen report being sexually active. But for those individuals that find themselves sexually active, their safety—both physically and mentally— should stand as a top priority for parents and educators alike. Only 57 percent of these sexually active teenagers used a condom the last time they participated in sexual intercourse. Expecting teenagers, with their eager-to-explore minds and hormones raging, to abstain from sex stands as an unrealistic expectation to place on such an experimental age group.

“In today’s society, I feel that teenagers have more freedom and make irrational decisions sometimes, but those decisions do not define them as a person,” junior Jada Reed said.

With people constantly arguing about the effectiveness of these programs and how they correlate to an area’s pregnancy rate, a larger awareness must develop for how the approach to teaching sex education affects the pregnancy rate in an area.

Georgia sex education advocates abstinence but still discusses sex in a positive manner. The law requires teachers to stress abstinence and include information of sex only within marriage and the negative outcomes of teen sex, but each sex educator teaches sexual health differently.

Georgia laws do not require educators to cover contraceptive use, condoms, sexual orientation, coercion, healthy decision making, or family communication in the curriculum. One can identify the glaring gray area where schools may incorporate more or less information into their curriculum. While some teachers abide by the standards and the textbook, others insert their own personal views and values into the lesson, skewing the knowledge taught to the younger generation.

Although Georgia requires their schools to teach students about sex and human immunodeficiency virus (HIV), no law requires the curriculum to be medically accurate.

No education police patrols the sex curriculum taught in schools, and without restrictions and strict follow-ups, the validity and reliability of the education comes into question. 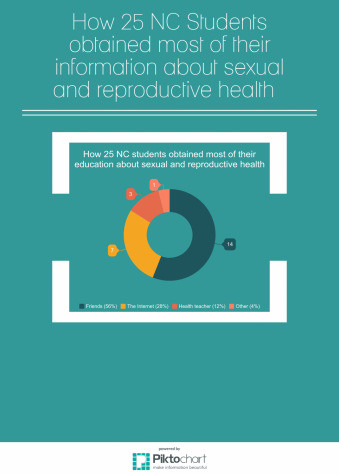 Tara Anastasoff
“They [health classes] focused on how condoms can break and how the only safe sex is to not have sex. It felt like they were treating sex as a drug addiction instead of something that’s a natural part of life,” Haley said.

At NC, health teachers take on the responsibility of educating their students about sex and their sexual health. Jackie Brewton, a sex education specialist and motivational speaker, also reaches out to high school health classes to promote an abstinence-approach to sexual health. While she aims to change a high school student’s mindset on sex, her own bias makes itself clear in her two-day lecture.

“She [Jackie] was so fixated on preaching abstinence that she assigned us homework over the weekend not to have sex. The lecture was good, and I liked what she had to say, and even though she had the persona of a trusted mentor, I felt there was an underlying feeling of plasticity. She didn’t seem too concerned with teaching the scientific aspect of sex, she was more focused on the moral aspect,” Haley said.

While the school system plays a large part in providing knowledge about sex, teenagers also learn about their bodies and relationships through social media, their friends and family, and pop culture references.

The days of innocent love songs about kissing in a tree fail to exist, and musicians today place an emphasis on sex in their music. With lyrics that can reinforce or encourage a behavior, it should come as no surprise that studies have found an increase in the number of references to explicit behavior in modern music, especially in the hip-hop/rap genre.

“I feel like hearing sexual and explicit behavior in songs sets standards for people in society. The ‘good sex’ that everyone talks about in songs is a fantasy; it’s not realistic, but people expect it to be so good because that’s all we hear in music. Everyone experiences sex differently and most of the time it’s not what music makes it out to be,” sophomore Jilly Arneth-Leist said.

Pop culture influences teens and their sexual behaviors, but results from the 2013 Kaiser Women’s Health Survey found that 64 percent of participants primarily received their information on sexual and reproductive health from either friends and family or the Internet.

With such a large percentage of individuals obtaining their information from external influences, it brings up the question about the true effectiveness of teachers in regards to sex. In fact, the study reports that only four percent of people felt that a teacher provided them with ample knowledge on sex education. Students can feel awkward when placed in situations where an adult talks to them about sex, and with the Internet readily available at one’s fingertips, the accessibility of knowledge and desire to avoid discomfort causes individuals to take to the world wide web for information.

In a survey of 25 NC students, 14 of them felt that they obtained most of their knowledge on sexual and reproductive health through their friends. While a peer feels more comfortable to talk to about an unfortunately uncomfortable subject, one can question the reliability and accuracy of the relayed information.

If teachers taught sex accurately and without bias in an environment where students felt comfortable and encouraged communication, perhaps the number of misinformed teens would decrease. Educating the younger generation not only helps them make more informed decisions; it means that their children will grow up in a more open and knowledgeable environment.