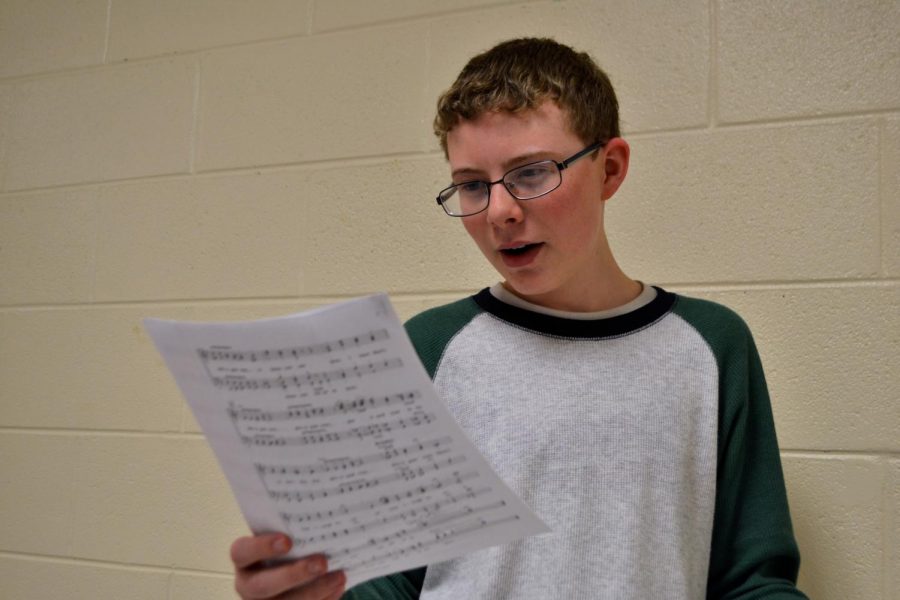 Freshman Joseph Jenkins demonstrates his singing capabilities. Together with Jenkins, NC’s own Joshua Dixon and Chandler Quaile all made the grade for the statewide ensemble. “It’s a really fun experience,” Jenkins said.

Members of NC’s chorus traveled to Kell High School to seek their fortunes in the second audition for the Georgia Music Educators Association’s (GMEA) all-state ensemble on Monday, January 19.

Sophomores Joshua Dixon and Chandler Quaile joined freshman Joseph Jenkins at the event, all three having qualified at the prior audition. All students currently enrolled in a chorus class could participate in that first bout of competition.

“It started with an audition in Cartersville, and after looking at scores, the all-state judges come out with cut-off scores. Moreover, six music pieces are sent out to the qualifiers depending on what choir was made, and then you have approximately three weeks until the second audition. This was the second event and was the final audition in order to make it to all-state at UGA [the University of Georgia],” Quaile said.

The audition ramped up the difficulty for students seeking the coveted final spots.

“It was very difficult. For our first audition, we had to do a solo and had to learn it by ourselves. We could ask for help from our teachers, but it was only very limited, and for our sight reading it was a new example that we didn’t get to see. [The second audition] was harder than the first one because one of our songs was really quick, and you have to have perfect breath control,” Jenkins said.

Performing both memorized solos and on-the-spot sight readings, competitors aimed to demonstrate their vocal capabilities to the program’s judges. These songs challenged participants to stretch their abilities and further develop their talent, making the audition a constructive experience even for those who failed to make the all-state chorus.

“It was excellent. The judges were very nice, and the overall process was seamless. Furthermore the chorus pieces were fun and entertaining,” Quaile said.

Overall, the participants described their auditions as an arduous but rewarding and memorable experience.

“It’s a really fun experience. Even if it’s really difficult, it does take a lot of dedication, but it’s really worth it in the end if you were to make it and be able to go [to UGA],” Jenkins said.

All three of NC’s candidates succeeded in their second auditions, adding considerable luster to their records as performers. The competitors involved will therefore represent their school and the state of Georgia later this year in the all-state chorus.

“I feel both accomplished and humbled. The opportunity provides a unique and interesting path to improvement alongside growth,” Quaile said.