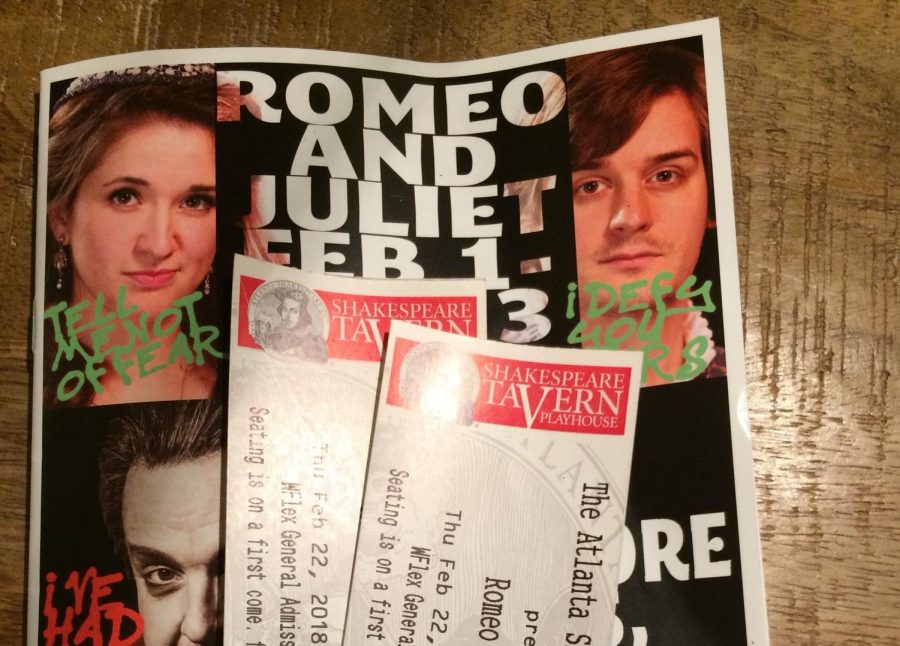 Attendees at the Shakespeare Tavern’s production of the iconic tragedy Romeo and Juliet received this program highlighting the season’s performances. The play, considered a classic of world literature, follows the troubled romance of two lovers from rival families. Performances of the play will continue through Saturday, March 3.

From February 3 to March 3, 2018, the Atlanta Shakespeare Company performs Romeo and Juliet at its distinctive venue, the Shakespeare Tavern Playhouse.

The iconic play, written by the popular Elizabethan dramatist William Shakespeare, depicts the tragic misfortunes of two lovers from rival families as they struggle to preserve their secret romance.

A tale as old as time: When Montague heir Romeo encounters Juliet Capulet, the only daughter of his father’s political and social archenemy, at a masquerade, the two almost immediately fall in love, leading to a rapid courtship and soon a secret wedding. Unconscious of their heirs’ romantic endeavors, the Montague and Capulet families continue their near-constant warfare, with disastrous consequences.

Actor Gabriella Anderson as Juliet undoubtedly steals the show, and Sean Kelley’s impressive Romeo combines with stellar backing performances from the likes of Vinnie Mascola, O’Neil Delapenha, J. Tony Brown, Troy Willis, and Elaine Wadsworth to create a memorable production. The actors highlight the humorous elements of the story and dialogue, making a case that perhaps critics ought to understand the play as one of Shakespeare’s first tragicomedies. However, the comedy does not come at the detriment of the play’s darker and more serious undertones.

The staging, while not quite remarkable in and of itself, does its job more than sufficiently in setting the backdrop to the characters’ misadventures, and its understatement allows the acting to shine forth undiluted by scenic clamor. The actors’ costumes in particular feel true to the emotions, characters, and period, building a strong sense of believability and viewer immersion. The actors’ repeated interactions with the audience only add to the feeling of intimacy and emotional connection.

Overall, the Atlanta Shakespeare Company’s production of Romeo and Juliet constitutes a worthy addition to the theater’s repertoire and an excellent pastime for anyone seeking a night’s theatrical enjoyment and cultural edification. The performance therefore serves as yet another success in the company’s already stellar record.