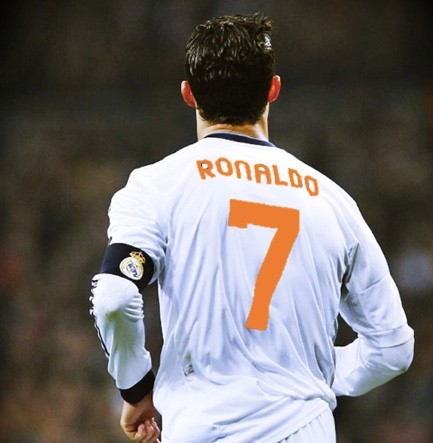 Cristiano Ronaldo, pictured looking at the hundreds of screaming fans packed in the bleachers who now support the NC team, displays NC colors as he runs across the field.

NC offered famous and renowned soccer player Cristiano Ronaldo a deal that blew the entire school budget to join the varsity soccer team in their efforts to win state.

“The NC varsity soccer team shows much promise, but with me by their side, there’s no question that we will go to state and even regionals and nationals! I’m looking forward to my time playing for this team,” Ronaldo said.

Ronaldo certainly scores the team an abundance of goals but he actually causes too much disruption for the other players. The boys on the team fight and trip over each other just trying to reach and touch Ronaldo. On the first day of practice with their new teammate, players brought t-shirts, soccer balls, and other paraphernalia for him to sign.

“Cristiano Ronaldo is my idol. I have loved him for over 4 years and now I’ve met him. It’s really my dream to play with him,” varsity soccer player Ben Schick said.

This aggravates Coach Pannell, the coach of the boys varsity soccer team, to no end. This soccer season shows promise because so far the team accomplished an unheard of record wins compared with their previous seasons. Pannell praises his team for their wins and plans to continue on with the coaching style he feels appropriate for them. Unfortunately, he began to voice complaints about Ronaldo interfering with his coaching.

“This Ronaldo guy is great or whatever, really talented, but he is not being a team player. Every time a boy tries to make a goal he stops them to critique! First of all, thats my job. And second of all, we’re never going to get anything done that way. The game needs to be played, not stopped every 5 minutes,” Pannell said.

NC principal Bucky Horton expressed another, even more pressing, concern: budget. NC blew the entire school year’s budget, $4.9 million dollars, on paying for Ronaldo. To cut costs, running water can only run for 22 minutes a day, electricity caps occur at exactly 3:30 PM, and all smart boards have been removed because “smarts” are an excess and a waste of time. Teachers now must bring in their own blackboards and chalk to teach lessons with and students sometimes bring flashlights to see their work when studying after school or making up exams. Principal Horton believes in Ronaldo and justifies sacrificing these necessities for him.

“Ronaldo is the GOAT [greatest of all time]. He is going to give our school the greatest reputation of any school in Georgia, I mean it’s Cristiano Ronaldo. Blowing the budget was absolutely, one hundred percent worth it. Besides, we’ll get some of the money back from ticket sales. I’m upping the prices to $20 for non-North Cobb affiliated fans. We’re going to win everything. We’re going to win nationals. He is the best thing to ever happen to this school,” Horton said.