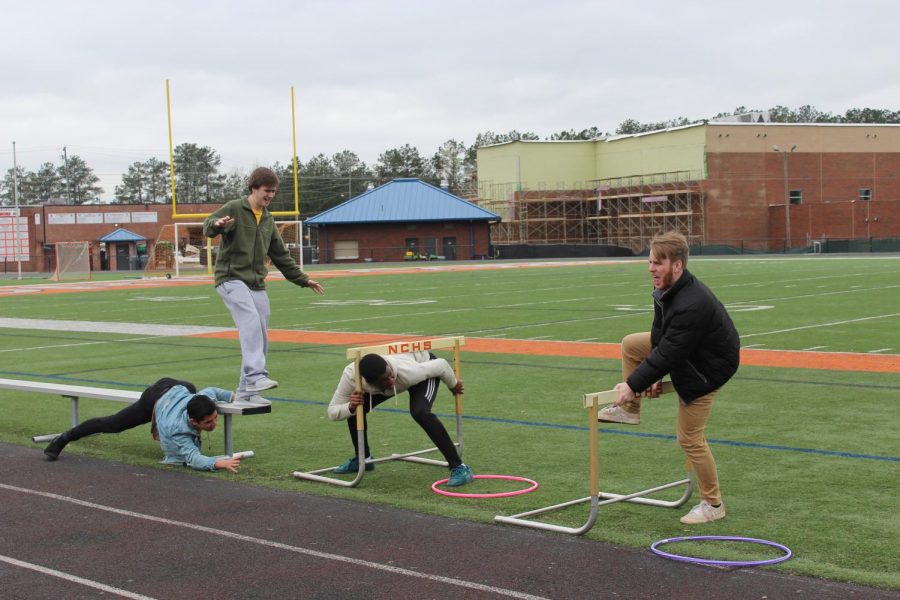 Prospective participants for the Warrior Trials to to learn the secret of moving through the hurdles as fast as possible.

Ever since the 1964 premiere of hit game show Jeopardy!, it seems like the game show exemplifies an essential part of American culture, as wholesome as a white picket fence. However, in the eighties and nineties, the genre saw a considerable decline in both popularity and viewership, with game shows “rotated out every thirteen weeks if unsuccessful.” This decline, however, led to the rise of a new kind of game show: the sports entertainment game show. This genre burst onto the seen in 2008, with the premiere of the wildly popular Wipeout, with the show topping the Tuesday ratings of its premiere week.

The success of Wipeout inspired imitators like Don’t Scare the Hare, I Love My Country, and Splatalot!, but only one managed to rival the success of Wipeout: American Ninja Warrior. Initially aired on G4 before moving to NBC, Ninja Warrior initially served as a licensed version of American Ninja Challenge, a nationwide competition sponsored by G4 “to send…American citizens to Japan to compete in the…TV show Sasuke”. However, the popularity of the show led to the two merging into one. Since its December 2009 premiere, it also regularly dominated the ratings, with the Season 9 finale drawing in 5.83 million viewers.

Clearly, America fell victim to the infectiousness of the obstacle course game show, and North Cobb seems like the most recent victim thereof. Last Friday, Tomahawk Today revealed a teaser trailer for The Warrior Trials, a physical activity game show set up in and filmed at North Cobb.

The show, set up by the PE Department, grew out of a desire to foster physical activity in students.

“From what we’ve seen, many students don’t participate in PE and instead choose to spend their time on their phones. Punishing them doesn’t seem to work, so we [coaches and PE teachers] decided: if punishing inactivity doesn’t work, why not promote benefits for activity?” Physical Education Department head Matt Williams said.

Benefits for participation include homework passes, extra credit on points, gift cards to local restaurants, free tickets to sports games and performances, and one of three potential grand prizes: a free electronic device of the winners choosing, a pass allowing students to exempt themselves from one test in one class, and a pass for a free period for a week.

The show follow a “test of endurance” type structure, according to Coach Queen: students begin at the front office, then start running towards the main gymnasium. Once they arrive, they will participate in 3 activities: a 20 minute game of danish rounders, 15 minutes of dodgeball, 10 minutes of flag tag.

After a 10 minute rest period, competitors must pass through an obstacle course set up across the football field, modeled after those seen in other game shows, like the aforementioned American Ninja Warrior; obstacles include roped walls, tennis ball cannons, and balancing atop balance beams. In addition to the normal obstacles, students must also perform tasks in the process of traversing the course, like kicking soccer balls into goals and throwing Frisbees. Finally once reaching the far end of the football field (behind the east facing football goal), students, after taking a 20 minute break with a complimentary lunch buffet, will run from the end of the field to the front of Awtrey Middle School.

While all this may seem too logistically convoluted to work out properly, the school administration confirmed that The Warrior Trials will not interfere with regularly scheduled classes or activities.

“We’ve received a lot of questions, not just from parents, but from teachers, school staff, and even some students, asking how the Trials will be implemented, so after about 2 and a half weeks of deliberation, we’ve decided to hold the games on weekends from 11:00 AM to 6:00 PM”, NC principal Bucky Horton said.

The rules for participation include:

All non-student participants must meet an age requirement of at least 18 years of age.
All taking part must pay a $15 fee, which funds the maintenance of PE equipment.
Students participating must possess a filled out form from their parents or guardians, allowing them to participate.
Students must possess no record of ISS, OSS, and no more than 3 instances of detention throughout high school.

While the show will not grace screens until April 7th, anticipation for the Warrior Trials seems palpable, with initial sign up sheets running out within the first three hours after the announcement. Surprisingly enough, while most would assume students to view the game show as either an opportunity to earn rewards for minimal work or a meaningless attempt to force kids to exercise, they actually seem rather fond of the idea.

“The idea of this game show is really radical, dude! Just like, running around, and like, doing this stuff sounds so mondo, and like, totally tubular,” senior Brodie Coral Reefington Bodacious Dudesman said.

The popularity of the show pre-premiere also means the arrival of donations in droves. While no plans for income besides the $15 fee existed, students seemed so eager to partake that on the Monday after the announcement on Tomahawk Today, over $3,000 in donations poured into the front office.

However, no plans for a spinoff series, or even the adoption of the premise by other schools across Cobb County, seem present. When asked why, administration stated their rationale stems more around the community than “street cred,” for lack of a better word.

“We understand the potential for recognition, what with us coming up with the idea of a school-wide game show, but something about every school creating one seems like it’d rob us, the Kennesaw and general North Cobb Community of something special,” Assistant Principal Dave Stephenson said.