Cookbook Club cooks up a storm 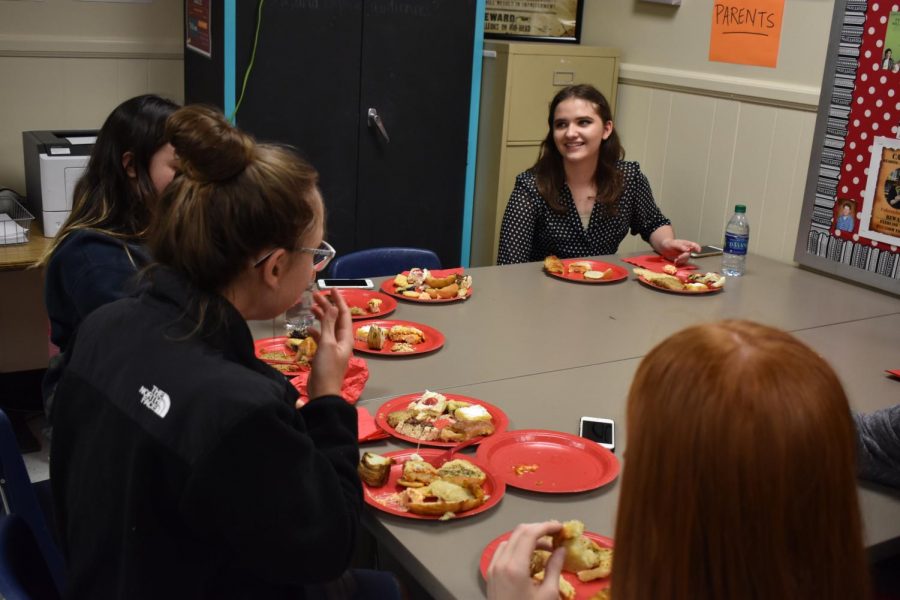 Students in the club converse and laugh while chowing down on the variety of food on their plates. A number of students revisited the food table for seconds, and even thirds, of their favorite dishes.

Cookbook Club, one of NC’s newest after school student clubs, held its second meeting in Mrs. Theaker’s room, 611, on Thursday, April 12. Each member of the club chose a recipe out of Ree Drummond’s cookbook The Pioneer Woman Cooks: Come and Get It! to create for Thursday’s meeting. With savory foods including Cap’n Crunch crusted chicken, pimento cheese dip, and roasted garlic pull apart bread, and sweet foods ranging from strawberry shortcake to peach dumplings, the students concocted a wide range of food to feast on.

“I got to try a bunch of new foods. I’d say the day was definitely a success. You get to learn how to cook and meet new people,” sophomore and club president Maddie Sullivan said.

After sampling each dish and heading back for seconds, each club member cast their votes for their favorite concoction. Resulting in an initial three-way tie between the pull apart garlic bread, peach dumplings, and strawberry shortcake, the garlic bread emerged victorious and earned its spot in the club’s official cookbook, which they plan to compile at the end of the year.

“I loved the zucchini bread, and I’m saying that as a person that is very picky and doesn’t like vegetables. It was very nice to have a bread that was sweet and yummy and had vegetables in it,” sophomore and club Vice President Devyn Maurer said.

The group conversed about the foods they created, discussed old school music, and made weekend plans for the upcoming spring book sale at the Cobb County Civic Center.

The club will hold its next meeting on Thursday, April 26 in Mrs. Theaker’s room (611), and the existing members encourage new members to come to the meeting with an open mind and an armful of cookbooks. At this meeting, the club will select a cookbook to choose recipes from and each student will claim a recipe to create for the feast at the next meeting.

“The club is definitely a fun time to meet new friends and try foods you normally wouldn’t try,” Maurer said.