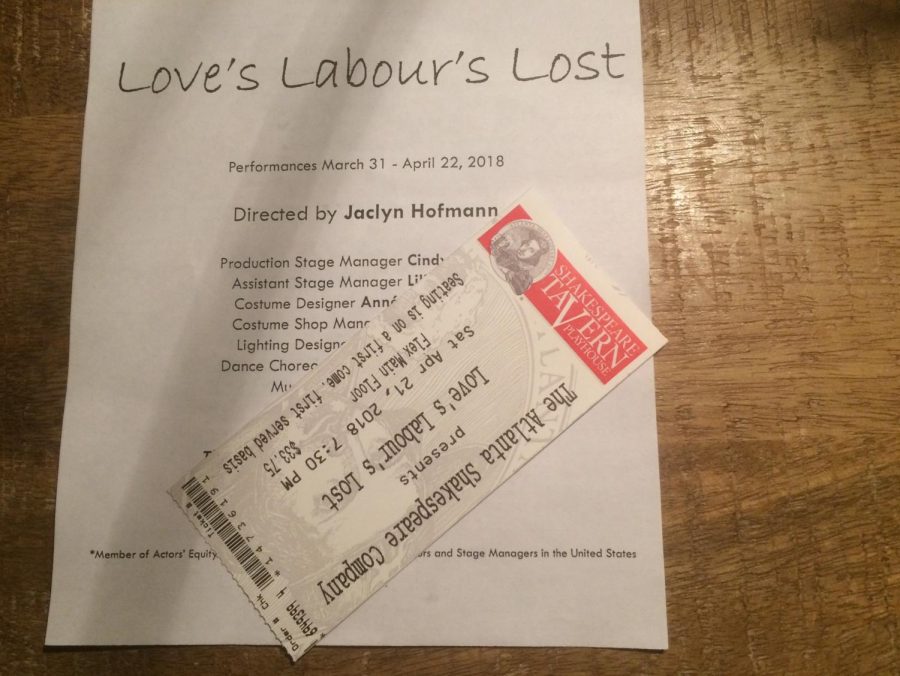 From March 31 to April 22, the Atlanta Shakespeare Company performed one of the Bard’s early comedies, Love’s Labour’s Lost. Though one of Shakespeare’s lesser known works, the play has grown in popularity in recent years, and its intricate wordplay and complex satire have earned it a considerable critical reputation.

The plot follows Ferdinand, King of Navarre, and three lords of his court, Berowne, Longaville, and Dumain, as they pledge to renounce worldly pleasures and romantic attachments for three years, and thereby devote themselves to lives of contemplation and study. Their plan, of course, fails miserably, and when the Princess of France arrives at the court with three ladies in tow, the Navarrese soon find themselves embroiled in a complex game of competing affections and allegiances. Their oft-incompetent suits and the ladies’ witty responses furnish the humor of the play.

By and large, the actors do triumphant justice to their parts. Seun Soyemi shines as King Ferdinand, and Sarah Newby Halicks as the Princess provides a more than sufficient counterpart, although Kelly Criss’s Rosaline undoubtedly stands out most among the Frenchwomen. Anthony Rodriguez as the self-important, melodramatic Spaniard Don Adriano de Armado and Adam King as his page, Moth, form the Shakespearean equivalent to a classic comedy duo, while Vinnie Mascola’s curate Sir Nathanial and Mary Ruth Ralston’s tutor Holofernes offer a hilariously terrible play-within-a-play performance of the Nine Worthies. The gender swap for the traditionally male Holofernes comes with the introduction of a deliberately awkward romantic tension between the tutor and her companion Sir Nathanial; this new element combines with a masterful performance by Drew Reeves as their associate Dull (the name matches the character’s intellect) to make the trio’s scenes a tour de force of both visual and verbal comedy. Nicholas Faircloth as the perpetually perplexed peasant Costard rounds out the cast’s greatest standouts. As always, the acting thus makes for a truly enjoyable production.

Jaclyn Hoffman’s inspired direction also makes the performance memorable. Well-done costumes combine with breathtaking scenery to produce the perfect mix of believability and fantasy, and the play brings out the comedy inherent in the situation on stage to riotous effect. Modern touches, such as Moth’s performance of Kelly Clarkson’s “Since U Been Gone,” give the play new life without detracting from Shakespeare’s original. Thus, the production itself both accompanies and enriches the actors’ excellent work.

The Shakespeare Tavern achieves yet another hit with Love’s Labour’s Lost. An inspired selection, a brilliant cast, and fantastic staging give the play definite pride of place among the company’s best recent performances. The fruits of the company’s labors, therefore, come out anything but lost.