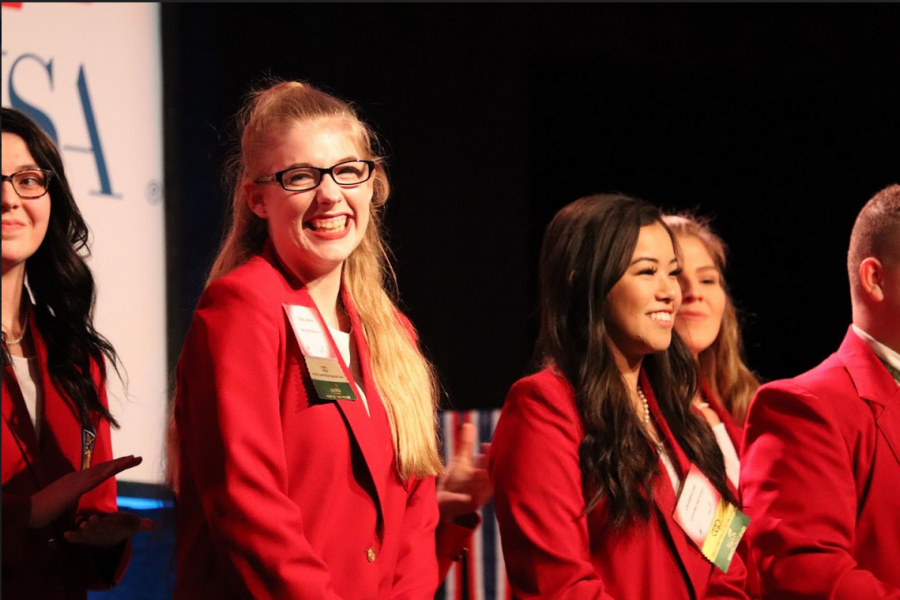 LaPierre soaks up all of the excitement that comes from becoming the second ever person in Cobb County to earn one of the state officer positions in SkillsUSA Georgia. “I worked so hard for this, I’m glad it all paid off in the end,” LaPierre said.

“What do you want to be when you grow up?”

High school clubs such as SkillsUSA can help students answer this age-old question and find a career path to avoid identity crises. Within the NC SkillsUSA chapter, vice president and junior Emily LaPierre has achieved one of the highest honors of leadership in SkillsUSA Georgia: State Officer. She will delegate and watch over the entirety of SkillsUSA Georgia with the help of SkillsUSA executives and her fellow state officers.

“I already had leadership positions within the North Cobb Chapter, but I felt like becoming a state officer would really help me expand my reach and leadership skills,” LaPierre said.

SkillsUSA Georgia supplies thousands of high school students looking to broaden their scope in their professional field goal. However, some competitions have no competitors in them at the State and Leadership Conference (SLSC) because of lack of able competitors. The organization has made efforts in the past to fix this issue, but no solution surfaced.

“When I get in the training sessions and meetings, I want to tackle our approach to the community and what problems are causing us to not fill those gaps,” LaPierre said.

When competitors travel to Atlanta for the SLSC, they tend to hang out exclusively with the chapter they came with. Students often see people from other schools as those that want to take away their first place medals, projecting negative feelings towards them. Seeing this lapse in communication, LaPierre wants to address this issue.

“I want it to be more of a family setting instead of just ‘I’m competing against them.’ I want everyone to feel comfortable around each other,” LaPierre said.

State Officers in SkillsUSA Georgia go through an intense application process that requires them to pass a multiple choice exam, interview with industry professionals, and present a three minute speech in front of total strangers. After that, a panel elects a slate of six officers with the highest cumulative scores from the test, interview, speech, and votes to become state officers. When the officers meet in June, they decide amongst themselves who becomes President, Vice President, Treasurer, Parliamentarian, Reporter, and Secretary.

“I’m really striving to get the President role because that’s where I feel like I can make the most change and do the most good,” LaPierre said.

LaPierre and her fellow state officers will travel to the National Leadership and Skills Conference (NLSC) in Louisville, Kentucky to receive proper leadership training and work with other state officer groups. Along with senior Turner Markwalter, senior Jules Shelly, and junior Zion Fitch, she will now represent Georgia in the broadcast news production competition due to the previous first place team scheduling vacations out of the country on the same week of the NLSC.

“I’m beyond excited for this, but also super nervous because besides focusing on my State Officer training, I need to focus on my team and making sure we are all prepared to take home the first place medals,” LaPierre said.

With the school year coming to a close, the SkillsUSA chapter at NC will need direction as graduating seniors held four of the six leadership positions. With this brain drain occuring, the underclassmen, led by LaPierre, plan to take on these vacant positions and elevate the club to a new level.

“I know we have a bunch of underclassmen that have been eager to get into leadership positions, so I can see things running very smoothly next year,” LaPierre said.

With SkillsUSA already prepping high school students with job-related skills and experience in their vocational fields, LaPierre will benefit from receiving direct attention from industry and political leaders and motivational speakers. Garnering this experience will award Lapierre with additional help when she graduates high school.

“I think I’ve learned a lot from SkillsUSA that I didn’t even know. For example, a lot of my speaking skills have been a lot better since joining. My leadership skills have already taken a turn for the better before I even get any State Officer training, so I will definitely take whatever information I learn with me as I transition into the workforce,” LaPierre said.

LaPierre will attend conferences and meetings throughout the summer and learn how she can improve SkillsUSA Georgia, as well as her leadership skills, for the better.