Pinning with pride: NHS ceremony goes off without a hitch 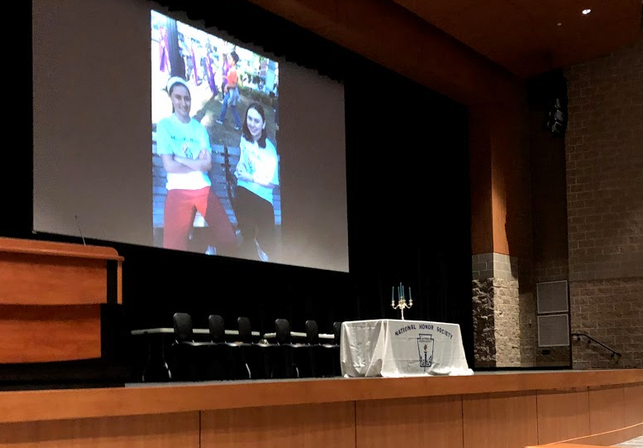 Senior members and new inductees gathered in the new theater for the annual National; Honors Society Pinning ceremony. Senior leadership members lit the candles symbolizing the 4 pillars of NHS: scholarship, service, leadership, and character. “I'm excited about the community service and the leadership but lighting the candle might be really weird,” junior Rebekah Geil said.

Juniors with a grade point average of 3.95 and satisfactory conduct reports gained acceptance into National Honors Society (NHS) and participated in the club’s induction ceremony on Thursday, May 3.

In an effort to celebrate students who display scholarship, service, leadership, and character, NHS hosts an induction ceremony every year for the new members, as well as to say “thank you” to the old. Juniors walked across the stage to collect their ceremonial induction pin, NHS membership cards, and certificates, and the seniors received their graduation stoles for participation.

“Crossing the stage made me nervous, I didn’t want to mess up, I was afraid I was going to fall, but I felt honored and excited to be there,” new NHS member and junior Shrina Barochia said.

Starting with the lighting of the candles, the ceremony reiterated the importance of the NHS pillars introduced by senior and club president Malachi Rock. Each member of the leadership team, all elected by the other members of the club, spoke about the significance of an individual pillar as they lit a candle symbolizing either scholarship, service, leadership, or character.

In total, NHS contains around 130 juniors and seniors. After receiving their stole, seniors spoke their name, college, and major in front of the audience. Parents and students applauded as future doctors, lawyers, and engineers crossed the NC stage.

“I really liked hearing where the seniors were going, it was really encouraging. It was nice to hear their majors. The amount of people going into the science fields was crazy,” newly elected secretary and junior Rebekah Geil said.

Led by science and Advanced Scientific Research teachers Nena Tippens and Jennifer Johnson, the ceremony lasted under an hour and concluded with snacks in the lobby created by NC’s culinary class. Parents celebrated with the new members and waved goodbye to the old, wishing them luck on their future journeys.

Current juniors voted for next year’s officers Friday, May 4. Voted NHS co-presidents, juniors Tara Anastasoff and Jared Nolen will lead the club’s meetings and eventually next year’s induction ceremony. The other members will continue the ceremony and meetings in their elected positions with juniors Rebekah Geil as secretary, Spencer Paige as vice president, Morgan Brown and Hannah Gunter as historians, and Tess Thompson as community service chair. These students will usher in the new round of members and continue on with the club’s annual ceremonies and community service events.