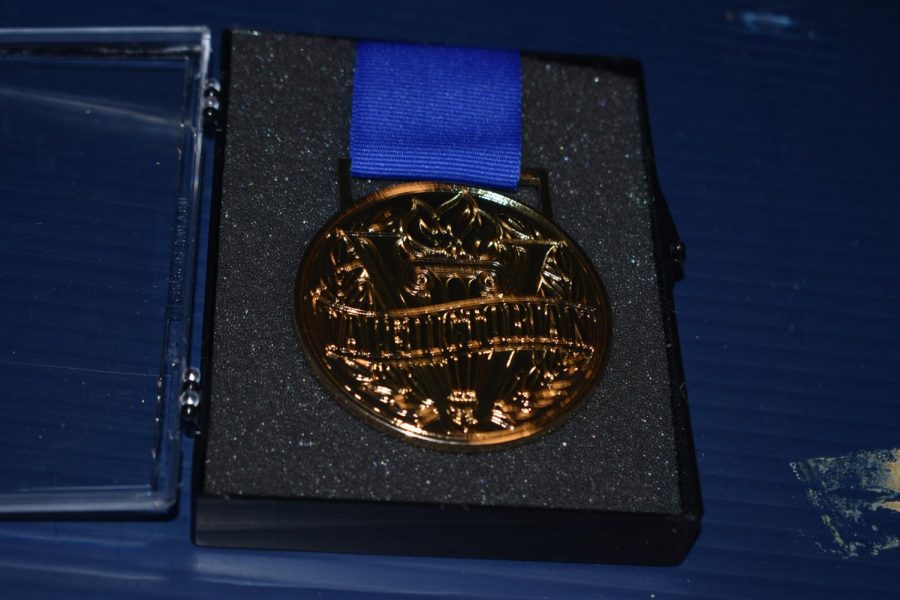 A rare glimpse at the valedictorian medal before the final decision based on the very last senior grade entered next week.

With the year winding down, the remaining portion of the school year officially enters into what teachers refer to as “crunch time.” Defined as “the interval of time immediately before [work] is due,” the phrase, while not generally more applicable to projects than an overall class, still retains its ability to induce stress in students. Common symptoms include “extreme exhaustion…and the inability to attend to necessary tasks,” all of which seem nigh omnipresent in NC seniors.

However, two students feel no such stress. Seniors Sarah Punch and Juliana Isbitts, unlike their peers, come off as calm and graceful under the pressures of both typical schoolwork and senioritis, both of which already seem impressive. However, one fact remains that distinguishes Punch and Isbitts from the rest of the senior class: either could potentially end up as senior class valedictorian.

A highly coveted position among NC students regardless of grade, the status of valedictorian requires extensive work, intellect, and mental fortitude to acquire; furthermore, while the actual valedictorian will be announced during graduation ceremonies, knowing that both girls could equally end up as the top ranking senior becomes more impressive when one factors in their Magnet status, and the additional pressures that comes with Magnet life.

Despite the usual stressors of this status, including the pressure to maintain grades and rivals vying for the spot, Punch remains humble, electing to not flout her potential position.

“[Potentially] being valedictorian feels pretty chill, actually. It doesn’t really feel like anything, it just is. It’s actually kind of a neutral situation,” Punch said.

Like Punch, Isbitts feels less stress than one would imagine from someone within reach of such a demanding position. Unlike Punch, however, Isbitts still finds her position stressful at times.

“I actually used to worry about it [maintaining grades] much more often than I do now, but it definitely doesn’t matter to me as much as it used to,” Isbitts said.

Like with all students, the two girls must deal with the anxiety of school and the benefactors: teachers, friends, and rivals alike. Unlike most other students, however, how the stress emerges, as well as the roles of school associates in developing it, differs from the average student considerably.

“People [are] always comparing you, and comparing their grades with yours. There’s also the fact that everyone thinks I just know everything, even [my] teachers, at times, tend to compare me with other students,” Punch said.

Constant comparisons of academic performance to that of others would logically stress out students, especially a valedictorian. However, the opposite of this sentiment applies to Isbitts.

“I’ve always tried to tune out competition, and rather than compare myself to others, I try to focus on trying my best and improving my study habits and my work,” Isbitts said.

Generally speaking, when a student decides to become the valedictorian of their graduating class, a sense of motivation exists to push them through the stress—such as recognition from a certain college, inspiring pride in friends or family, earning a scholarship, and more.

“I think [potentially] becoming valedictorian has been a mix of a few things. Both my friends and family are extremely supportive and help me when I get stressed about school,” Isbitts said.

While inspiring others, gaining recognition, and earning a scholarship drive Punch, her primary motivation seems rather bizarre to those who personally do not know her.

“Actually, I just liked the challenge of the Honors classes, so I kind of drifted towards that; I was never really motivated to take low credit classes, they’ve always bored me,” Punch said.

To her peers, the path to becoming senior class valedictorian could resemble one littered with fear and self-doubt. While worrying about grades and constant comparisons to others do warrant a fair share of concern, Punch appears completely immune to the usual stressors.

“The end goal was never really [to become] valedictorian, so I never worried. The goal was to do well in class,” Punch said.

This recurring theme of an almost aloof view on valedictorian status applies even to her methodology. The stereotype of potential valedictorians constantly on edge for fear of a GPA drop, while just a common typecast, does make at least a bit of sense. Considering all the hours of studying and reviewing, the legions of Honors and AP classes one would need to take, and the multiple exams and projects piling up, it hardly takes a genius to understand their somewhat high-strung nature. After all, the mind can only take so much stress before it breaks under the weight of its own pressure.

But as Punch consistently proves, the lure of valedictorian status would barely provide any more stress than the average AP class.

While far from the anxious and constantly on edge valedictorian shortlister seen in mass media, Isbitts shows herself as someone wise enough to know that while rest and relaxation deserve their due, doing work also needs to become a priority. This clear-headed approach can help other underclassmen coveting the position to realize the importance of both rest and work.

As for relaxed and breezy Punch, underclassmen, especially freshman, look up to Punch as a new kind of class scholar: wise, but challenge-seeking; carefree, but responsible. However, despite encouraging any and all NC students to reach her status, she does want to leave student with one crucial piece of advice.

“Just don’t get too stressed out, and don’t make it all you do in high school, because opportunities pass you by. Also, take advanced courses, but don’t overwork yourself. Remember to take time for yourself,” Punch said.

Earning the valedictorian position comes with a fair share of benefits, like a high chance of entering a desired college. Fringe benefits do exist, however, like putting the coveted achievement on a job resume.

However, despite all the potential benefits this position carries with it, both girls remain content to continue their current work at NC and let the future reveal itself in due time.