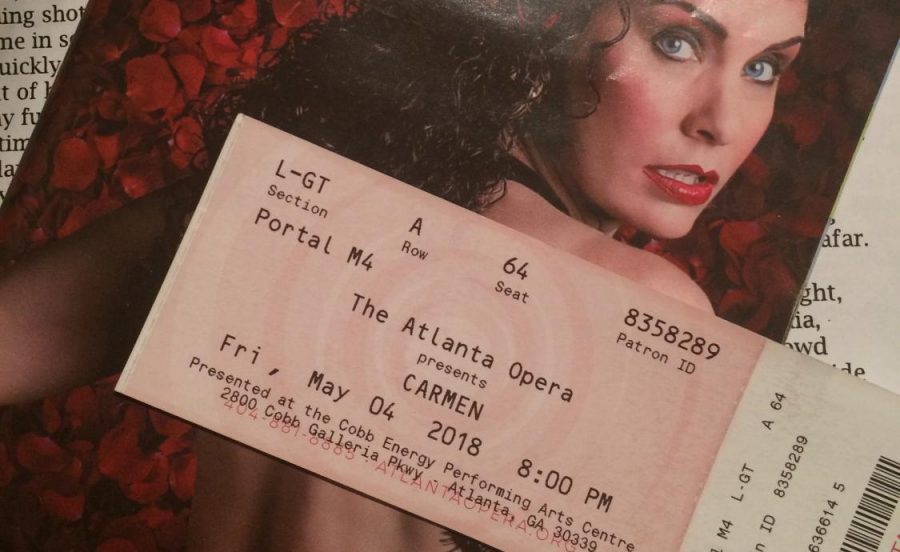 The Atlanta Opera recently performed its popular rendition of Georges Bizet’s Carmen. The opera follows the doomed romance between Carmen, played by Varduhi Abrahamyan, and Don Jose, portrayed by Gianluca Terranova, from its earth-shattering beginning to its tragic conclusion.

The Atlanta Opera performed Georges Bizet’s Carmen on Saturday, April 28, Tuesday, May 1, Friday, May 4, and Sunday, May 6. One of the world’s most popular and well-known operas, Carmen follows the doomed romance between the title character, a free-spirited and unabashedly seductive gypsy woman, and the tortured, obsessive soldier Don Jose. When the two first meet, Jose, despite a questionable past, still maintains a veneer of respectability and a healthy relationship with his village sweetheart Micaela. Carmen’s decidedly unrespectable charms exerts a powerful influence over him, and their affair ultimately leads both to Carmen’s tragic death and to Jose’s social and moral ruination.

The opera’s stars, Varduhi Abrahamyan as Carmen and Gianluca Terranova as Don Jose, both bring a memorable weight to their roles. Abrahamyan’s rich, mellifluous mezzo-soprano makes her singing a joy to hear, and Terranova’s superb voice and excellent visual acting make for a truly enthralling experience. Nicole Cabell’s powerful soprano in the role of Micaela embodies the perfect mix of moral innocence and passionate devotion, while Edward Parks as the bullfighter Escamillo both sings with remarkable ability and acts his part with seemingly effortless mastery. The leads hence combine with a strong backing cast to ensure that this Carmen never lacks for vocal glory or effective characterization.

Rich and believable sets cut no corners in making the stage a perfect nineteenth-century Spain. The company’s set designers show their mastery of efficient artifice, making the same arched structure transform without a hitch from a prison to a tavern to a country road to even a bullfighting arena. Despite the opera’s incredible variety of scenes, the visuals never seem forced or unrealistic, and the production interacts with the audience just enough to keep the performance new and interesting without detracting from the plot or the singing unfolding onstage.

The Atlanta Opera’s production of Carmen undoubtedly marks itself as a true theatrical triumph. Its glorious singing, remarkable acting, and explosive production should please both opera diehards and newcomers alike, and the performance strikes a careful but near-perfectly achieved balance between reverence for operatic tradition and courageous innovation. Oh, and the music sounds pretty good, too.