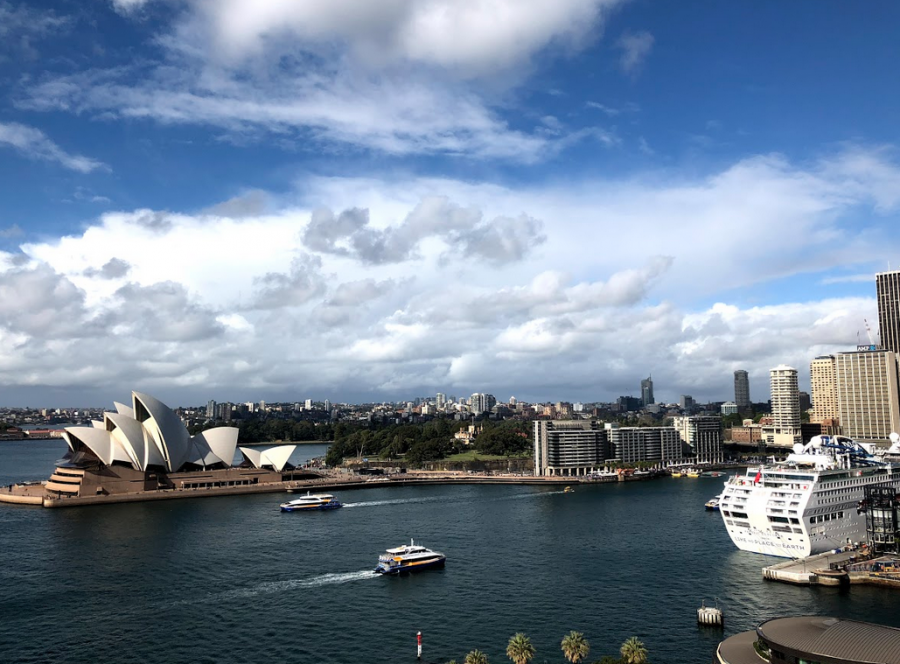 Overlooking the Sydney Harbor from the famed Sydney Harbor bridge, the group enjoyed the ships passing by and the view of the Opera House and downtown area. After a half-day hike around the city and across the bridge, the group huddled to view the city from the center of the 3,700 footbridge. “It was interesting to see the Opera house and bridge and all the parks but Australia felt like a normal big city. It wasn't very different than one you'd see in the United States,” Magnet senior Steven Tran said.

Over summer break, current Magnet seniors embarked on their junior trip to the South Pacific starting on June 3 and ending June 14. The 11-day trip allowed the group of around 47 students and chaperones to explore Australia, New Zealand, and Fiji. The international studies students spent four days in New Zealand, four days in Australia, and then finished off the trip with two days in Fiji. The students stayed huddled with the group for the entirety of the trip, including the plane rides, and gained a deeper understanding of their peers.

“If I could summarize this trip, I would say this was a bonding experience for everyone, I think I got closer to everyone. People were not putting on a mask anymore because we were together for so long. We all came together,” senior Charity Tillman said.

The Magnet students began preparing for the South Pacific trip in early 2016 of their  freshman year. Three years of monthly payments later, the students set off on their long awaited trip. Rising before the sun, the students left at 4:30 a.m. June 3 to fly across the international dateline; 14 hours later, they arrived in New Zealand after a brief layover in San Francisco, California, where they explored the Fisherman’s Wharf and looked across the water at the famed Alcatraz prison.

Staying in the town Rotorua, the students explored the geothermal vent filled landscape. These geothermal vents pushed steam through the crust of the earth, lifting up beautiful fog and the haunting smell of sulfur. The locals take advantage of the natural energy and heat generating vents, powering even the hotels the students resided in.

“When I first saw New Zealand, it was like a Hollywood movie, I wasn’t expecting the terrain and the rock formations on the rolling hills. There was a gigantic volcano in the middle of Rotorua,” senior Steven Tran said.

Partaking in a traditional dance and performance with the Māori indigenous people, the students enjoyed their cultural immersion in a museum-style walking tour of the modeled village. The Māori encouraged the sharing of their knowledge and culture through their music and dance-oriented storytelling and incorporation of visitors in their culture. Finishing off the night, students listened to traditional songs and ate the specially prepared meals heated by the geothermal vents that the Māori used to cook for hundreds of years.

On a free day, some of the students who paid an extra 90 dollars ventured to Hobbiton. This tourist attraction displays scenes from the award-winning films in the Lord of the Rings series, with emphasis on The Hobbit. Unique landscapes and picturesque locations brought the students into Middle Earth.

“Hobbiton made me feel like I was in the movie. Not to be cheesy, but it really felt magical. The landscape was really pretty,” Tillman said.

Leaving New Zealand, the students piled into their third plane and ventured to Sydney, Australia. Getting full view of the harbor and opera house, students wandered about the city, trying to soak in everything from the architecture to the national monuments peppering the streets . After whale watching, natural sightseeing, and touring the opera house, the students visited Vivid Sydney the exclusively australian light show famous for illuminating the downtown area. Images and stories projected on buildings, and the opera house lit up the Sydney Harbor and surrounding streets.

“Vivid Sydney was so unique. It was very electronic and surreal. There was a floating image on the side of a building of a baby riding a lizard away from an animated tree,” Tran said.

Finishing off their Sydney adventure, students explored Featherdale Wildlife Park, a zoo containing almost every native and unique South Pacific animal. Wallabies, kangaroos, koalas, and a special type of Australian penguin trotted about for all to see. The delightful endeavor in Australia ended as the students rushed to the airport for Fiji.

“I touched a koala; not everyone can say that. I petted kangaroos too,” Tran said.

Unlike the practically freezing temperatures in Australia and New Zealand, Fiji, a tropical island, held highs of 80 to 90 degrees fahrenheit in their winter. Greeted by warm air and smiles, the students received seashell necklaces from airport workers saying “Bula,” the signature word of Fiji that means “hello,” “welcome,” and “thank you.” Spending time in the Naviti Resort, the students enjoyed a view of a beach on the waterfront from outdoor cabanas. Driving out to the primarily native inhabited section of the island in Nadi, the group, adorned with handmade flower necklaces, wandered about a native village. The village inhabitants sat in the meeting hall, built by the members of the village, and began a welcoming ceremony full of cultural song and dance with the drinking of a local root-based drink called Kava.

“I preferred seeing all of a country like all of the native villages we saw, not just the nice little tourist spots,” Tran said.

Continuing the venture into the island culture, the students visited a public primary school for the surrounding village’s children. The open building plan held children of all ages that ran from room to room. Greeting the group, the older children led individual tours for students, telling them of their classes and life in Fiji.

“The school made me feel very grateful and humble for what I have. They were so appreciative and so happy when they had so little and we have so much,” Tillman said.

Hopping onto their sixth plane, the students returned to California and waited for their last plane ride home. After seven plane rides over the two-week trip, the return home felt bittersweet with memories of the once-in-a-lifetime South Pacific trip dancing in their heads.