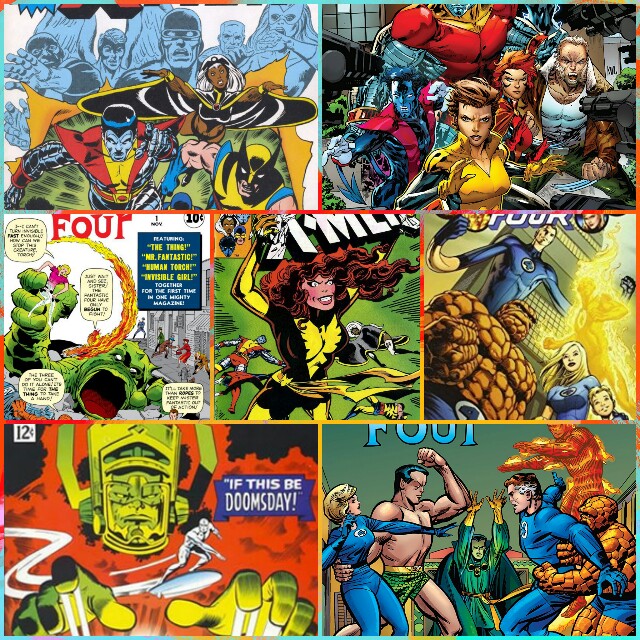 The Fantastic Four and X-Men comprise two of the most popular teams in Marvel comics, and with the new Fox/Disney merger, both titles should come to the Marvel Cinematic Universe in the coming years.

The pop culture landscape of the last two decades seems like a warzone, with different franchises like Star Wars, Detective Comics, Marvel, and others vying for control; despite all the various options to choose from,  the Marvel brand undoubtedly reigns supreme, and while various factors contributed to their current reign over pop culture, without a doubt the films in the Marvel Cinematic Universe played the largest role.

Because of the movies, names once relegated to the niche of the comic world, like Iron Man and Drax, now sit firmly within the current cultural lexicon; however, more casual fans frequently forget the beginnings of the brand. First brought to life by writer Stan Lee and artist Jack Kirby in the Manhattan offices of Marvel Comics in 1961, the modern Marvel Universe began with the Fantastic Four, a family of superhuman adventurers exploring the universe and fighting evil. With colorful visuals and relatable protagonists, the series not only revitalized the stagnant comic industry, but breathed new life into the once sluggish publisher. Two years later, the iconic comic duo created the X-Men, a team of “mutant” teenagers combating both superpowered threats and human intolerance. As time progressed, both teams began to  sadly, unlike the main line Marvel characters, the forays of the two groups in movies vary wildly in quality; but with the Fox-Disney merger recently approved, the opportunities for the Merry Mutants and Marvel’s First Family to shine on screen seem endless. This list contains suggestions that can best aid the future of both groups on film.

Focus On the Team: For all the praise sung about Hugh Jackman’s Wolverine, Patrick Stewart Xavier, and Ian McKellen’s Magneto, hardcore fans of the series agree that all characters in the films earned far less development, a statement with credence: Jean Grey, founding member and love interest to Cyclops, existed as just a source of tension between Cyclops and Wolverine in the first trilogy, and lacked any real character in Apocalypse. The latter sentiment applies for Cyclops, but in the first three films, he played the uptight kiss-up there to butt heads with the rebel to the bone, iconoclast Wolverine. And in both trilogies, fan-favorites Havok, Storm, and Nightcrawler did nothing but fill up space. The X-Men, as seen in the comics, exist as one giant family, each with their own lives and struggles, like the insecurities of Cyclops or the swashbuckling joy felt by Nightcrawler. If Disney wants audiences invested in X-Men, they need to create layered and interesting characters from their vast roster.
The Right Team:  The X-Men movies, ironically enough, always contained a large amount of characters, with Days of Future Past featuring twelve members compared to the six in The Avengers. As mentioned above, the films exclusively focuses on a miniscule amount of characters, leaving the rest underdeveloped and uninteresting. When Disney makes their first X-Men film, they need to ensure that each character serves a purpose in the team, while also allowing each character to develop over the series; the idea of international heroes doing good by their native countries by saving the world can also set this team apart. With a larger push for ethnic representation in Hollywood now, the roster from Giant-Size X-Men #1 could fill that quota, with members such as:

Embrace the Fantastic: Comic books, by nature, exist as a larger-than-life medium. They started this way, remained that way, and will likely stay that way. However, this does not mean that no grounded comics exist, because they do. Despite this, the stories that made the medium so iconic hold reader’s interest because of their bold, bright nature. The X-Men serve as leaders in this trend, especially considering the constant time travel and cosmic escapades the team endures, and the notion that the X-Men experience such grandiose adventures seems to embarrass Fox. In all fairness, the series began in 2000, when audiences considered the notion of people running around in tights fighting crime silly. This explains the muted costume colors, hyper-realistic stories, and general aversion to what make the X-Men the X-Men, but the landscape changed. Films like Thor: Ragnarok and Guardians of the Galaxy show that audiences can accept the more “out there” side of the medium. Rather than represent a dated interpretation of cool, the X-Men should adapt with the times.
Sources of Inspiration: When making a comic-book-inspired movie, directors and screenwriters will normally read a specific storyline or author run, and use it as a relative roadmap for the plot. Avengers: Infinity War, for example, drew inspiration from Infinity by Jonathan Hickman and The Infinity Gauntlet by Jim Starlin. In the case of Fox’s X-Men films, this rarely ever happened. While X2 drew inspiration from God Loves, Man Kills, the movie just vaguely rwa sentiment universal to all films in the series. Adapting stories page for page sounds like the best route to go, but striking a fine balance between an original story and adapting an existing one, as proven time and time again by the MCU, will work out.

Marvel’s first family came to the big screen twice before, with the two Fantastic Four films released in 2005 and 2007, along with Fan4stic released in 2015. All three films received overwhelmingly negative reviews, and the comic community overall regards them as insults to the source material. So, how should the MCU portray the Fantastic Four to set the record straight?

The MCU needs to understand the fundamentals of the team. Reed “Mr. Fantastic” Richards, Ben “The Thing” Grimm, Sue “Invisible Girl” Storm (or Richards), and Johnny “Human Torch” Storm, all possess unique characteristics that make them valuable to the team.

Reed Richards, the head of the group and considered the smartest man alive, comes up with the plans and develops new technology for the team. He, as an intellectual, needs to show characteristics of a private, brilliant man with infectious charisma to bring his character to life. Sue Storm, the emotional foundation for the team, can help with her stealth and ability to make force fields. She can act as the ”mother” of the Fantastic Four and can also break up the juvenile fights between Grimm and Storm.

Ben Grimm, the self-hating powerhouse of the team, struggles with his physical appearance and has a tumultuous relationship with the fiery teenager Johnny Storm. Storm, the headstrong, irresponsible hot head of the team may prove the easiest to portray accurately on the big screen. He, though not one-dimensional, seems like the most straightforward of the characters.

The MCU took goofy characters in comics and humanized them on screen, and hopefully the Fantastic Four will prove that the MCU can do so with characters in desperate need of revitalization. They created the mold of the “celebrity” superheros out of necessity, as Reed Richards wanted to protect their image and humanity not to fear them, after they gained their powers from a rocket launch and cosmic rays hitting their spacecraft before they returned to Earth.

Their introduction needs to resemble the close-knit family they come from. The MCU can take several routes, rooting from their spacecraft origin, and use them as a great way to introduce cosmic Marvel on Earth. Comic storylines such as the arrival of Galactus The World Eater on Earth could easily take shape in solo Fantastic Four films.

Eventually though, the team needs to develop into the seasoned veterans of the cosmos they comprise in the comics. Taking a note from Jonathan Hickman’s run on the Fantastic Four, the MCU could craft truly grandiose stories with themes viewers can all relate to.

In essence, the Fantastic Four embodies massive potential for expanding the MCU. The theme of family struggles, while present in Guardians of the Galaxy, could manifest into a wholesome and relatable series for all ages to enjoy, all while employing the goofiness integral in the Fantastic Four’s characters.

The success of the Marvel Cinematic Universe should astound all, growing from a relatively obscure action movie franchise into the most profitable brand in film history. However, the two pillars that made the House of Ideas so iconic ended up left in the dust—overshadowed. Nevertheless, the future looks bright, and if the last ten years of Marvel films serves as any indicator, characters once considered “cheesy” or “lame,” can turn into icons overnight, as long as they receive the right amount of care.