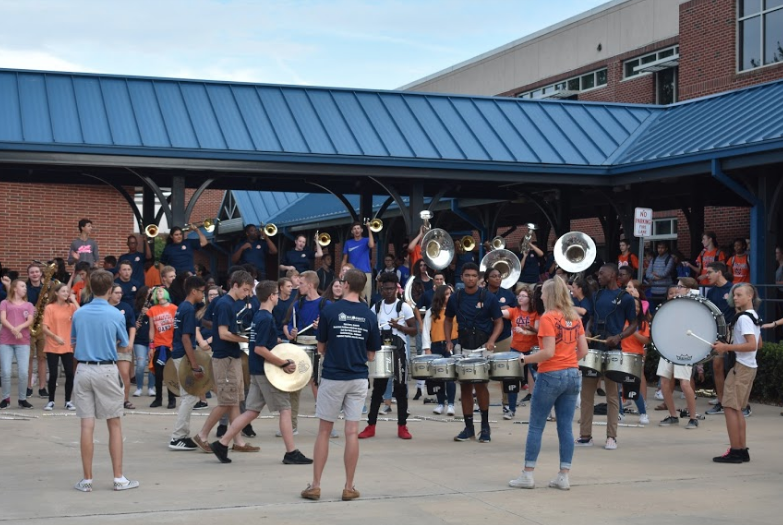 Seen here performing for onlookers on Pep Rally Day, the band shows off their hard work. In addition to displaying what the group knows thus far, this display also served to get the students excited for the football game later that night.

A list of high school benefits, as long as they usually appear,  should definitely include the various different clubs and organizations offered. These organizations, in addition to looking nice on college applications and resumes, give students a sense of camaraderie; they allow kids to work, interact, and at times compete with their peers, allowing them to grow. Perhaps no extracurricular activity encapsulates this spirit better than NC’s band, where all three traits play an active part of the course. Consistent with past years, the band aims to improve their craft while maintaining the high standard set throughout the years.

It seems like an obvious fact, but consistent practice in band comes above all else, as to attain even a modest competency with an instrument requires extensive rehearsal, something members of the band greatly value. Considering the countless years band members spent with their instruments, it would stand to reason that members could become complacent in their level of performance, and shirk the responsibility of practice because of their “experience,” but the band members understand and respect the value of even the most basic of skills.

“I think it’s [the practice that] helped me become a better musician, as I’ve been learning about the fundamentals, which is what practice has mainly been about; without that, you’ll never be a great musician,” junior flute player Nicole Cline said.

Beyond the obvious benefit of improving the skill level of the group, constant practice also helps the band perform and represent the school better. Like most of the other music-based student organizations in the Cobb County area, the band attends various trips, concerts, and conferences throughout the semester. Regardless of their practice, however, a genuine sense of pressure for the NC band to succeed at these competitions and events exists, as unlike a middle school band, NC’s band will perform for far larger crowds.

“The [Marching] Band will go to three competitions this fall: one at Allatoona HS, another at Sprayberry, and we’ll end the season at the Bands of America (BoA) Regional at McEachern; the Wind Symphony has been invited as a featured ensemble at UGA for an honor event called JANfest, which is on Friday, January 18th,” Band Director Sheldon Frazier said.

The students need to face more than the pressure to succeed; they must also try to live up to the high standards set by the senior class of last season. Considered by underclassmen as the cream of the crop in terms of NC musicians, their departure meant that despite the considerable potential of the current band, a considerable amount of talent, experience, and wisdom now exists elsewhere. Still, not all students view this added stress to succeed as inherently detrimental.

“I feel sometimes that the pressure to succeed is a bit overwhelming, but in the end, I feel like it’s worth it to help me become a better musician,” sophomore Hayden Neissl said.

As for the pressure of last year’s senior band class leaving, a decent amount of current members do feel worried about the state of the band, as aside from the skill of those seniors, those students comprised a considerable portion of the band. Despite this, not only do other students feel confident in the future of the group, those same students believe no detrimental effects resulted from their departure.

“We have a different staff this year, and they’re teaching us in a way that makes us not just better, but in a way where it’s like they [last year’s senior band members] never left,” senior and drum major Andrew Riner said.

This determination not only to perform well, but continually raise the bar of excellence, highlights the defining features of the NC Band: the dedication to the group and belief that they can constantly improve, traits which earn the group considerable praise.

“This year’s band is honestly a joy to teach. There’s a drive and a work ethic in the band that is one of the best I’ve seen in my ten years teaching. The students are passionate, hard-working, and determined to get better. It makes coming to work everyday rewarding. Last year was the band’s first 1st place finish in four years. Regardless of the awards this year’s band receives, the students have a commitment to excellence that is incredibly impressive; I’m enjoying the season and looking forward to continuing it with this group,” Director Frazier said.