Preppy at the first pep-rally in the new Arena 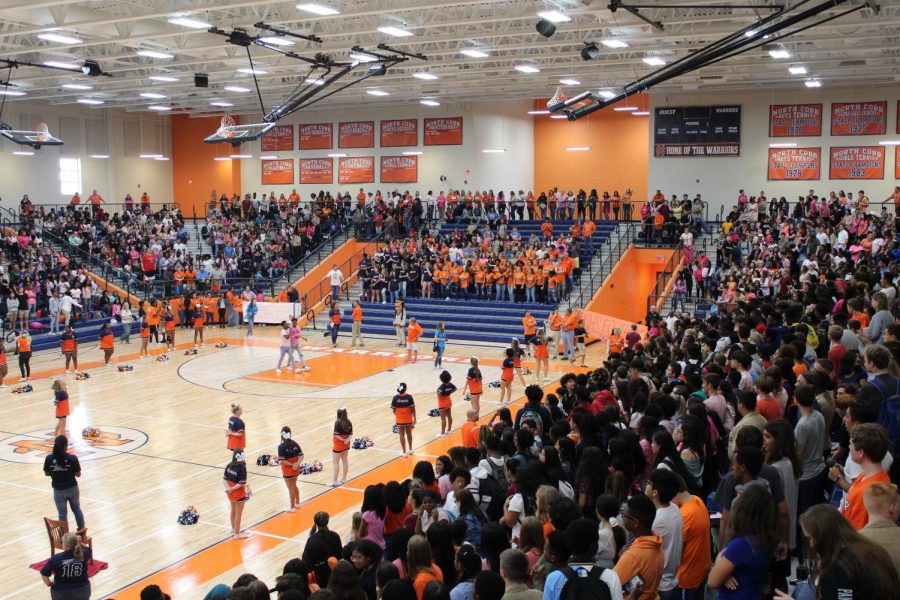 The crowd of more than 2,500 students watch in anticipation as the speakers try to fire up the crowd, leading into the prominent entrance of the football team. The cheerleaders pause their dancing to place a central focus on the team’s entrance, serving as a solid start and promotion to the year’s football season. The Arena lights eventually dimmed, and a variety of students across the space lit up their cell-phone LED lights, waving them in the air in support of the football players about to race through a large banner.

Students of all grade levels swarmed into NC’s brand new Arena to take part in the first pep-rally of the school year on Friday, August 17. The idea of the integration between the freshmen, sophomores, juniors, and seniors came with the opening of the new Arena and its extensive seating capacity. With previous pep rallies originally being held outside in the stadium, this event brought a distinctive commencement to this year’s football season. While the student section strived to show their school-spirit and energy through a combination of shouting and chanting, those on the floor attempted to put on a well-organized, exciting show to electrify the crowd.

“The pep rally is truly a great experience— one where everyone gets to come together and really have a great time as a whole,” senior and pep-rally speaker Zion Fitch said.

In past years, NC Tribal Connections organized pep-rallies into two shows, the freshmen and sophomores at one time, and the juniors and seniors at another due to the stadium’s small seating capacity. This year, the newly built Arena fits the entire student body into one room with its seating capacity of 3,000, making the pep rally an affair for everyone.

“I feel like the arena makes the pep-rallies more fun because everyone is aiming to be together,” junior Rahel Kefetew said.

The NC student body rose up out of their seats to dance with the band, and hoped to gain a shot at winning the Warrior Spirit Stick for the year. Along with senior speakers Zion Fitch and Chike Asuzu, the mascot Warrior led the race for the Spirit Stick, challenging each class to be the loudest and most spirited.

“The kids did a great job at getting fired up. The seniors did a really good job because they won the Spirit Stick,” Principal Matthew Moody said.

Student participation throughout the event kicked off the Warrior football team’s first game of the season, taking place later that night at 7:30 p.m. The pep rally concluded with a musical tune from the student-conducted marching band, along with the NC color guard dancing on the floor excited for the game to come.