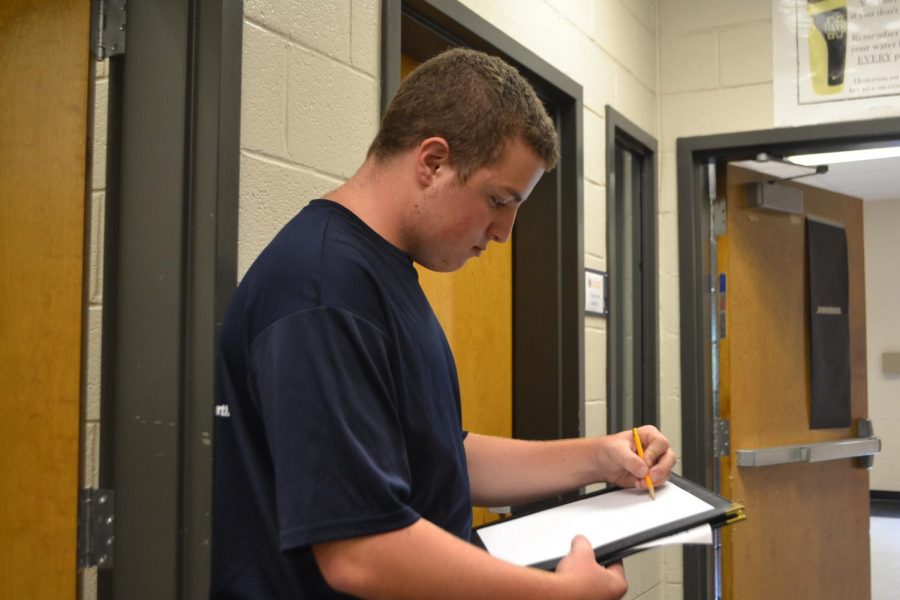 Senior Brad Pilcher begins work on a new band uniform design. Since first taking up the hobby over his junior year spring break, he has expanded his talents into a quickly developing freelance business.

No matter what instruments make up a school’s lineup, any self-respecting high school marching band knows that it must employ one crucial element: a band uniform. Such uniforms perform essential functions: they give the band a professional appearance, create an enjoyable visual experience for the audience, and furnish each school with a distinctive identity. Yet the process behind their production remains a mystery to most, even those intimately involved with band activities. To students and parents alike, the uniforms simply form part of the universe, as indisputably and mysteriously as the sun or the moon or the sea. Senior Brad Pilcher, a uniform designer himself, knows a great deal more about how marching band uniforms come into existence.

“I got into uniform design when I first got to see our new uniforms for the marching band, and I was like, ‘Wow, this seems kind of cool, designing uniforms to potentially shape some band’s future,’” Pilcher said.

Following this realization, Pilcher explored the field and quickly developed a talent for uniform design, drawing his own proposals for institutions throughout the marching band community.

“I’ve done designs for local marching bands such as our own and Kennesaw Mountain’s band. I’ve done designs for different colleges such as KSU and Oberlin College, and then I even do stuff for professional groups such as the Blue Devils, Bluecoats, and Spirit of Atlanta of Drum Corps International,” Pilcher said.

Pilcher follows a meticulous process in producing his designs, employing careful shading and exquisite color to ensure that each constitutes a professional and appealing visual identity for a school or corps.

“I start with the head and everything up there, and then I just go down through the body, through the legs, and I sketch that all in pencil. Then I do markered drawings with different variations of colors,” Pilcher said.

Pilcher now hopes to build a business out of his former hobby, sending designs to well-known uniform companies such as F. J. Miller, DeMoulin Uniforms, and Stanbury Uniforms and freelancing for various schools and other bands.

Perhaps his most impressive achievement yet, though, came when Rome’s Model High School recruited him to work on updating their uniforms. Though the uniform production company eventually decided against Pilcher’s design, the experience nonetheless served as a useful foray into the world of professional uniform design.

“I [was] on the design effort for Model High School’s drum major uniforms and was approached by one of the drum majors directly,” Pilcher said.

A passion that Pilcher once took up from casual curiosity has thus become an unexpectedly significant factor in his life and future. As Pilcher continues to expand his burgeoning business, he remains distinctly humbled and astounded at the success he has achieved so far.

“I didn’t expect the fact that this all came from just a hobby over spring break. I’m just like, ‘Here, let’s try this,’ and then I just sort of got into it, and I wanted to actually get bigger— maybe even make this a career,” Pilcher said.