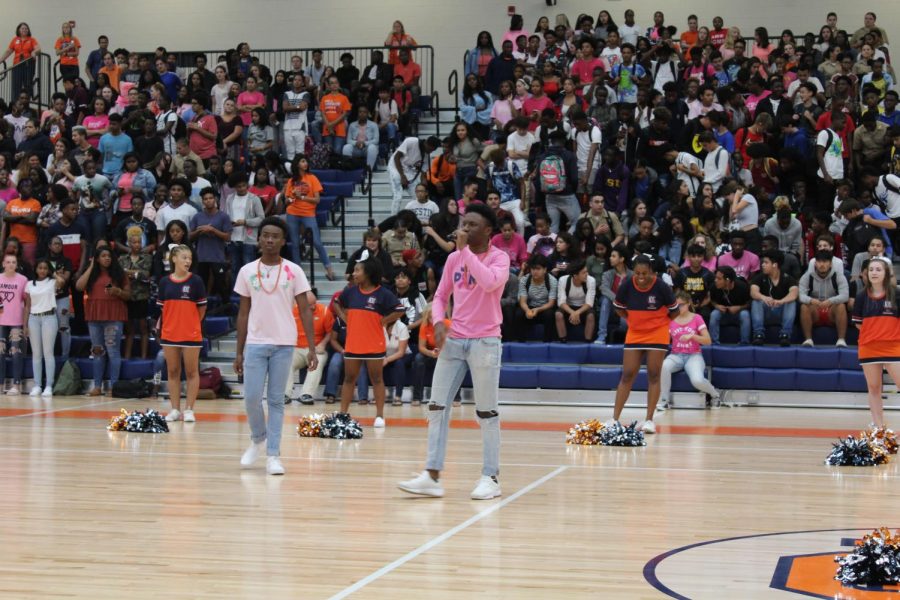 TC senior co-leaders Chike Azusu and Zion Fitch build up student excitement during a pep rally in the Arena. This ability to bring school pride out of all NC students falls high on the requirements for members.

The idea of leading a school into the future resonates with kids, exemplified by NC’s own student government, Tribal Connections (TC). TC consists of over 100 members across all four grade levels that play an active role in planning out, setting up, and participating in various activities for the school and all their work obviously benefits the school, as school employees are left less work; however, the role students play in this group also proves them to hold genuine influence over the community.

“Joining TC has made me a better public speaker and role model. Along with being a leader for many of my fellow students, it allows me to reach out to friends—new and old—and give my voice to help the school be a more enjoyable place,” junior member Feron Ali said.

This group of students are responsible for working on the planning and execution of school events from Homecoming to pep rallies and senior week. TC plans events for both our school and for the local community.  Obviously, the city government plans the vast majority of what happens in Kennesaw and Acworth, but TC members tend to work alongside city officials even with their packed schedules.

“We have Hoopcoming this spring, both the Homecoming game and the dance, Shop With a Warrior this winter, three more pep rallies for the year, WFTK [Warriors for the Kids], the Taste of Kennesaw festival, and more [planned for the year],” junior and TC member Priscilla Petersen said.

Like most other forms of government, student-run or otherwise, TC aims to give their constituents a voice in the school’s happenings and hold nominations for both the Hoopcoming and Homecoming kings and queens and class officer elections. These events show exactly how a student can take part in the student leadership of the school, bringing great pride to the senior group leaders.

“[I’d say] we want to keep all of the students as engaged as possible; this is a student-run and student-led organization, and as the voice of NC, any student who wants something changed, this is their avenue to do so,” TC sponsor Cara Hamilton said.

Despite their best efforts, it can seem at times like the majority of students not involved in TC lack any real form of influence; for one, only TC members can run as class officers. This rule, while seemingly set in stone, at least seems as a wake up call to leadership to the problem of unilateral participation—something they actively seek to diminish.

“They [TC student leaders] plan to unify the school more, to make it feel like every single student’s voice is heard, and to include all clubs in the school, because that’s what TC is: inclusion for the entire school,” co-sponsor Rachel Mercer said.

As a student government organization, TC serves to instill qualities like cooperation, communication, planning, and dependability in its leaders and members, new and old. These values certainly hold appreciable importance but countless other “leadership building” clubs, like Beta Club, the National Honor Society, and even Relay for Life, instill similar qualities. TC members, though, argue that TC cultivates a unique and worthwhile  bonding experience for NC students.

“Honestly,  TC is like one big family. More than [building] leadership, we build connections, so that we can get out and show how great NC is,” senior TC member Alaina Toombs said.