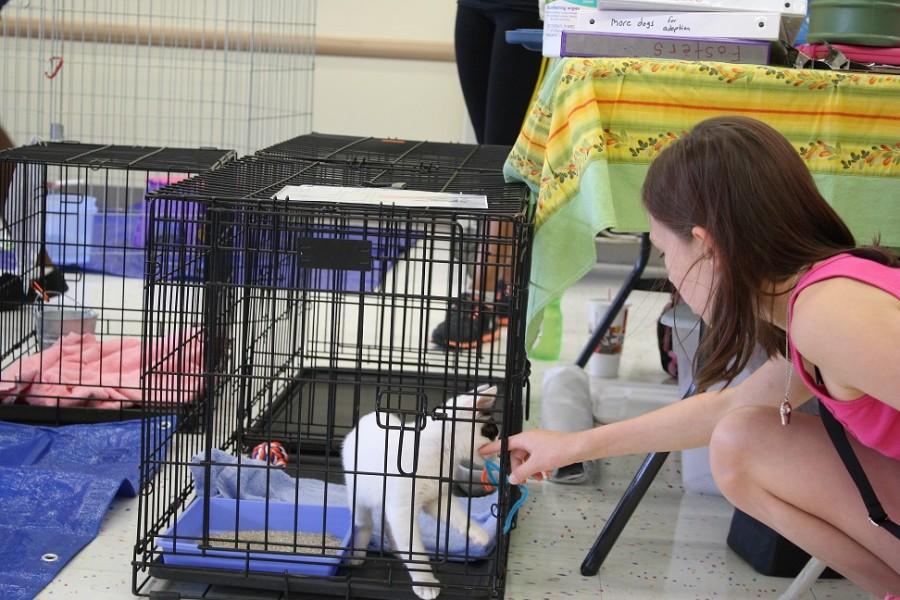 A girl shopping with her parents leans down to pet the only kitten at the PAWS Club drive at Petco on Barrett Parkway.

PAWS club, a new club that closely works with Cherokee Humane Society, will meet every Wednesday morning at 7:50 in Mr. Romero’s room, 2202. The idea of the club, which dedicates itself to assisting adoptions of homeless pets, serves as the brainchild of senior Liberti Gates.

“Liberti came to me and expressed interest in creating the club, and I know her family is very involved in that sort of thing. She’s one of my soccer players, so helping her take on a leadership role was a very driving force,” Mr. Romero said.

Members of PAWS gain community service hours by participating in fundraisers, drives, and aiding the adoptions that occur outside Petsmart and the Petco on Barrett Parkway. At the adoptions, they walk, feed, and take care of the dogs put out for adoption.

“I started the club because my family has always helped out animals through the Cherokee Humane Society, and we always need volunteers to help with the adoptions. I thought this was a good way to get volunteers,” Gates said.

Based on the reception the club has already received, it appears as if North Cobb has discovered a previously untapped area of animal love.

“I started the club four weeks ago, and for the first meeting I was expecting around ten people, but fifty people came, and it’s continuing to increase,” Gates said.

Members often join PAWS due to the multiple benefits the club offers.

“I love puppies and really want to help them, but getting additional community service hours is definitely a bonus too,” junior Jasmine Perez said.

At adoption drives, where members earn most of their hours, Warriors try to find as many people as possible to take home a new best friend.

“I love volunteering because when I grow up I want to become a vet, and I wanted to see what it was like to work with animals in that setting. It’s also really rewarding to see the puppies being adopted,” freshman Ryan Moten said, who also designed the new PAWS Club T-shirts.

Currently, PAWS plans to gather towels for the animals through their Towel Drive. PAWS members will place boxes in multiple homerooms, and the teacher who raises the most towels will get a free PAWS T-shirt.

“I have a great interest towards the club myself, because I have a puppy of my own, so anything to help out in that field is pretty cool. Liberti is doing a great job,” Romero said.