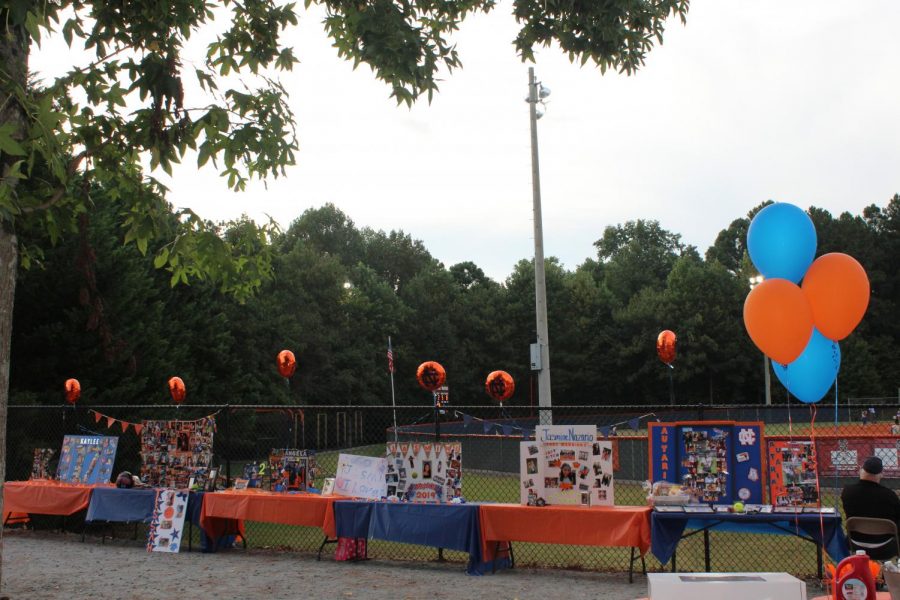 Posters honoring the senior members of the team adorned the gate surrounding the gate near the softball arena; balloon arches and flowers also lined the entrance to the field.

The varsity NC Lady Warriors Softball team held their senior night recently, where in addition to defeating the McEachern Indians, also held a ceremony honoring the senior players on the team; this game marks the final at bat for the senior varsity players at NC; all of which occurred last Thursday, September 6. Prior to the the game, a ceremony held for these girls took place during which a parent or loved one walked them down the field up to home base, while the sports announcer read handwritten letters by the senior players detailing favorite team moments and memories, as well as kind words to the coaches and teammates. As a last word to the team, as well as their friends and family, the whole team and their coaches celebrated the seniors with cake, brownies, and other sweets in an after-game party.

Despite the game taking place early in September, it does not fulfill the position of an early season game; in fact, this game marks the halfway point of their season, with the kickoff scrimmage against Norcross ending in a defeat on August 2. Ever since then, and during conditioning, the team spent several hours on the field, practicing and perfecting their skills in all aspects of the game. Tedious as all this preparation may seem, its true purpose reveals itself in the heat of the game.

“The girls have really been working their tails off for the whole season, but especially during the last two weeks. They’ve been catching their pitches, as well as their teammates, batting as far as possible, and I really do feel that all their work will pay off tonight,” Coach Kathy Ezzell said.

Individual practice, while all well and good, becomes negligible if the collective unit lacks a strong foundation to stand upon; this exact reason explains why the coaches stress the learning and accommodation of the strengths and weaknesses of each team member. This philosophy of codependent training, much like their individual training, holds extremely high value to the coaches, as they believe it will maximize team efficiency.

“They’ve come together as a single unit, and they’ve done so well at that that it’s like they know what their other teammates are thinking, when they’re throwing the ball from point A to point B,” Coach Glenn Pannel said.

This allowed fellow senior member Angela Cecere to take a walk and later steal second base. After this, junior Katherine Bywaters stepped up to bat and scored the Warriors two runs on runs batted in, wherein a batter earns a run due to their appearance on the plate; that brought the score up to 2-2. Later, senior Kendall Minard hit a hard double and stole the fourth base run, capping off the first inning with a score of 4-2.

The second inning, when compared to the first, seemed relatively docile, as while both teams attempted to score, the opposing team managed to consistently thwart their attempts, leading to a fairly dry and uninteresting second inning. It consisted of a back and forth “McEachern strikes the ball, NC catches,” or vice versa during the bottoms of the innings. Rather than deny this fact, the Lady Warriors actively acknowledged it and made an attempt to correct it.

“We started a little slow in the first inning, and especially in the second inning, but we knew what needed to be done, which was continue getting hits in a cycle, and so we did and it just kept going and going,” senior Jasmine Copeland commented.

During the third inning, the streak of good graces continued with Cecere leading off with a powerful hit, followed by Copeland scoring the Lady Warriors two home runs and increasing the lead to 6-2. This inning marked more than just a turning point in the game; it also marked the beginning of the real action of the game, something team members seemed acutely aware of.

“We were definitely more pumped in the third inning than in the first two, we played with a lot more intensity,” Bywaters said.

While less impactful than the first and third innings, the fourth and fifth innings still secured the team a satisfying victory. Early on in the fairly short fourth inning, senior players Tessah McAllister and Autaria Morgan both started off with single hits later allowing senior Kaylee Jordan, through a strong clutch double hit, to score the two ladies, bringing the score up to 8-2, NC. The fifth inning began with Minard making a strong double after which McAllister hit a double of her own, scoring Minard. Capping off the 5th inning, as well as the game, Jordan managed to earn the winning RBI and scored junior Averi Childress, ending the game with a score of 10-2, NC. This victory, beyond making the ladies look good, informs all NC softball coaches that the season, while winding down, still shines bright.

“The win shows true heart for the Lady Warriors; to score two runs, and then never look back, or [the fact] that we never even thought of giving up, that to me signals a really promising rest of the season,” head Ladies Softball Coach JoBeth Weaver said.