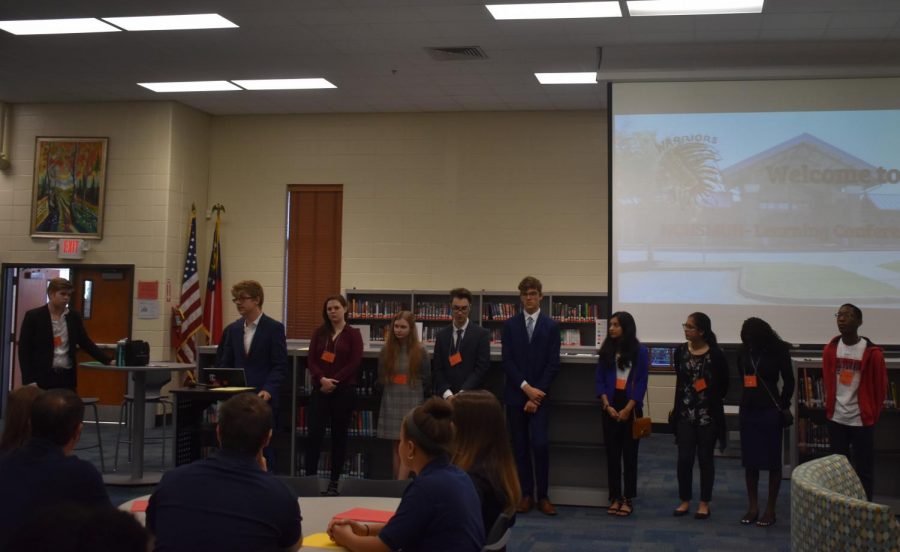 NC Model United Nations (MUN) held their annual New Delegate Conference at NC on Saturday, September 15. The fact that the conference this year comprised of not just veteran members and leadership but also new members, separates the conference of this year from ones prior. In addition to NC students, students from Harrison High School and Lyndon Academy, a private college prep school, attended because both intend to start up their own MUN clubs at their schools. Throughout the event, participants learned how to effectively fill the role of a delegate, with all their knowledge built up throughout the day culminating in a mock session discussing the Israel-Palestine conflict.

“I actually think the new members have been doing really good; a lot better than our middle school conference; that’s because I think everyone’s a lot more confident here, and has some kind of background knowledge on the concept of debating, delegating, and making resolutions, whereas the middle schoolers lacked that experience, and were subsequently psyched out as a result. But everyone’s been participating really well and seem really happy,” senior Spencer Paige said.

The New Delegate Conference, as implied by the name, teaches the fundamentals of the club, and the aptitudes that it would demand. An outsider looking in would assume those aptitudes comprise mostly of debating tactics and persuasive writing techniques, and those assumptions certainly hold merit, as both skills and their application intertwine themselves deep within the group. Despite this, far more skills besides these earned teaching time at the conference with several workshops set up in various classrooms around NC.

“[New Delegate Conference is] where students come in and learn Parliamentary procedure [decorum during deliberative meetings], public speaking tips, country briefings, how to write resolutions and do research, as well as receive a country briefing [brief list containing the viewpoints of a nation regarding international topics], all of which is what students need to know to be successful in MUN,” club adviser Dr. Pamela Roach said.

No doubt these skills certainly hold importance for any delegate, because after all the club aims to simulate the experience of a foreign ambassador. Despite this, the skills taught to the freshfoots at conference need not only warrant usage exclusive to MUN. In fact, the student leaders seemed to make it abundantly clear that the skills taught at the New Delegate Conference lend far more service to just the club but also to life.

“The New Delegate Conference teaches [public speaking, debating and negotiation tactics, and how best to come to peaceful solutions] skills obviously important for a delegate, but also just for life. You can use these skills during an argument with someone, a job interview, or anything like that, really,” sophomores Prapti Tanti, Ilyana Bonfo, and Sonal Boghra said.

Despite all the good that occured, this does not, however, mean the whole of the conference comprised of smooth sailing throughout; student leaders rotated in and out of the sessions during the day, lessening the number of supervisors. While the participating students certainly performed up to par, they seemed too proficient, so much so that an improvised crisis meeting (one occurring in the event of a real-world catastrophe) ended up thrown out, so as to fill up time, with the new members discussing a hypothetical bombing committed by a Hezbollah-affiliated group. The biggest problem leadership faced, though, seemed rather common and unbefitting the activity.

“I’d say that for staff, it’s probably the hardest to organize everything; to keep everyone together in one area and doing the same thing. Now, this isn’t the fault of the new members, but rather this unintentional chaos is just common when working with large groups in activities involving more traditional work,” senior Cedric Pfeiler said.

Throughout the day, the new delegates received four lessons discussing concepts necessary for success in the club: Public Speaking, Country Briefings, Rules and Procedures, and Parliamentary Procedure. The first and final skills seem fairly evident. The second did prove tedious for prospective students unused to the periodically contradictory positions of their assigned nations. The third lesson, however, proved considerably more difficult than the rest, due in large part to the sheer amount of guidelines present. For this reason, club members deem the Rules and Procedures portion the most important.

“I’d say Rules and Procedures[is most important], because without an understanding of any game, you’re limited in how you can play the game, as these procedures are used in real life at public meetings. That’s really helpful to know,” Roach said.

Expectations for the novices to perform prior to the event admittedly seemed low, due to a conference held for middle schoolers yielding fairly lackluster amounts of engagement and participation. Despite this prior sour experience, the new members at New Delegate managed to leave a positive impression on the MUN members.