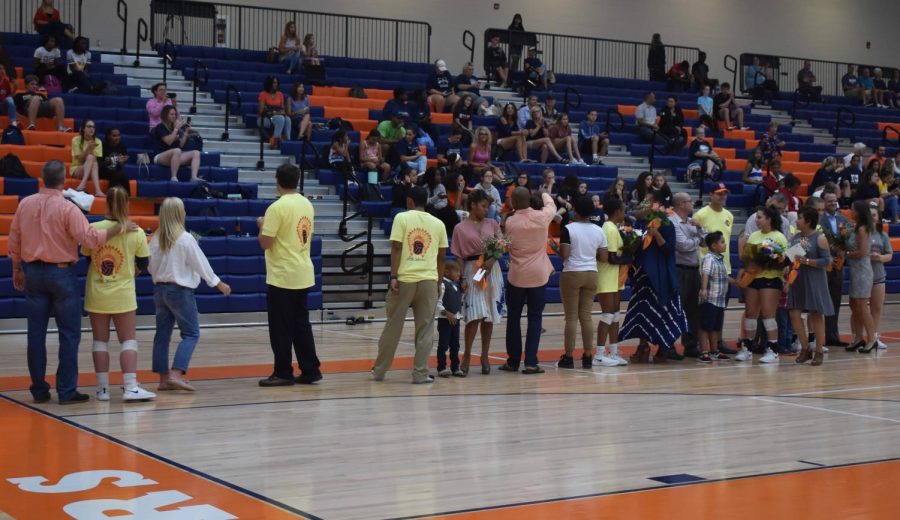 The senior volleyball players and their families line up shortly before the start of the game to address the crowd. The seniors honored include (in order of appearance) Taylor Hall, Jada Reed, Isabella Rodriguez, and Alison Weigel.

The Varsity Lady Warriors Volleyball team faced off against the North Paulding Wolfpack this past Tuesday, September 18th in the Arena. Aside from the face off with a rival school, the game held special importance to the girls as it occurred during the senior night for the team. Considering the emotional significance of the event, as well as the pre-existing pressure to succeed in the game, it would not stretch reality to imply the team may worry about their odds at success. Despite this pressure, the team seemed rather well-adjusted and optimistic prior to the start of the game.

“We feel really good about our chances tonight; we’ve played really, really hard the last few weeks, so we hope to keep that streak going on into tonight”, Head Coach Stephen Sansing said.

Like with other senior nights, the game was preceded with a ceremony to honor the achievements of the senior players, as senior night marks the final game the players spend with NC. The honors for the varsity volleyball seniors last shorter than that of other NC sports, due to the existence of only 4 senior team members. However, it seems like in exchange for event length, the Lady Warriors gained a more intimate ceremony. Letters handwritten by each senior read aloud to the whole of the stadium contained elements like favored team memories and hopes for the future, letters wherein seniors display respectable ambition.

“Hopefully, I’ll play D1 at Stanford or the University of Florida; if not, then I’d like to pursue a degree in Biochemistry and Computer Science, and then make a career out of that”, proclaimed senior Christina Pratcher.

In addition, each senior walked down with her family as well as a favorite teacher. Seniors reflected on how their experiences with the team produced a slightly different version of them than the person who initially joined.

“Over the last 4 years, I’ve gotten the chance to meet a lot of new people, and as a result, I’ve become a leader. But aside from that, I haven’t changed much during my time with the team”, senior player Allison Weigle said.

Strangely enough, a varsity senior night game did not attract a particularly large crowd of spectators; any number of factors could contribute to this like the Tuesday play date or the relatively late running time of the game (ended at 8:30). Despite this, the energy in the Arena still maintained well, which like the game viewed that night, resulted from group activity.

“The team has very good energy, there’s very good support from their teammates, both on the court and on the bench”, sophomore Harrison Ford proudly claimed.

The Lady Warriors maintained that same energy throughout the whole game. Not much happened in the first of the four sets, besides the exciting fact of it resulting in a 25-12 win for NC. The second set started off fairly sluggish, but picked up midway through, when junior Nicole Tran dug (passing a spiked ball) the ball out to senior Taylor Hall, the latter of whom (via an assist from fellow senior Jada Reed) earned a kill (point). Shortly thereafter, Hall set up teammate Allison Weigel to earn a point for the Lady Warriors. Soon after, Reed and senior teammate Christina Pratcher blocked a strike from the right-side hitter of North Paulding, scoring NC another point. This streak of good kismet continued late into the set, with Weigel passing the ball back to Hall, who set up Kayla Johnson to nab a point. The set concluded with Reed passing the ball in a serve receive (position wherein one team prepares to receive the serve from the opposing team) to Tran, who, with an assist from Weigel, earned a point. Despite all their hard work, the Lady Warriors unfortunately lost the set 25-22 NP, bringing the overall game score to 1-1.

The likelihood of victory became notably clearer during the third set.  Not unlike the second set, it started out strong with senior Isabella Rodriguez immediately scoring an ace for the team. After a brief back and forth of points between the two teams, NC earned themselves a kill when Tran passed the ball to Hall, who promptly slammed it over the net. More back and forth occured up until early on in the middle portion of the set, wherein Hall, after a powerful dig from Rodriguez, earned a kill over the Wolfpack. Near the the end portion of set 3, senior Ellie Boyle forcefully aced the ball for a point. This set concluded after North Paulding struck the ball down in a potent strike, Pratcher and Hall managing to prevent the opposing outside hitter from earning a point, finishing up the set at a close 25-17, NC; these kinds of set winning blocks played a large role throughout the whole of the game.

Still basking in the high of their previous victory, the Lady Warriors kept up the assault on NP, through both vigorous offense and calculated defense. This notion takes form when considering that Tran, throughout the entirety of the set, served fifteen balls between the scores of 3-2 and 18-3, all in favor of North Cobb; among these serves, four of which resulted in aces. Among the earlier NC serves in the game, while not aces, still produced a precious point: with Tran serving the ball, the subsequent overpass (pass from receiving team immediately sent back to serving team) from NP allowed Boyle to earn a kill. This marked the first in a line of 15 uninterrupted points acquired by the Lady Warriors. Within these points, Weigel managed to dig the ball to Hall, who after setting it out to Johnson, earned a point. The Wolfpack managed to gain a bit of traction towards the end of the set, eventually earning five points back. Regardless, the Lady Warriors halted that streak with a powerful game winning block from Johnson and Pratcher, concluding the set at a score of 25-8 and the overall game at 3-1, a score the team views as indicative of the effort placed into their craft.

“I thought we played really hard and fought hard, and it showed that if we played to our true potential, we’d easily win every game we play”, junior Nicole Tran said.