Heroes in crisis: how to save the DCEU 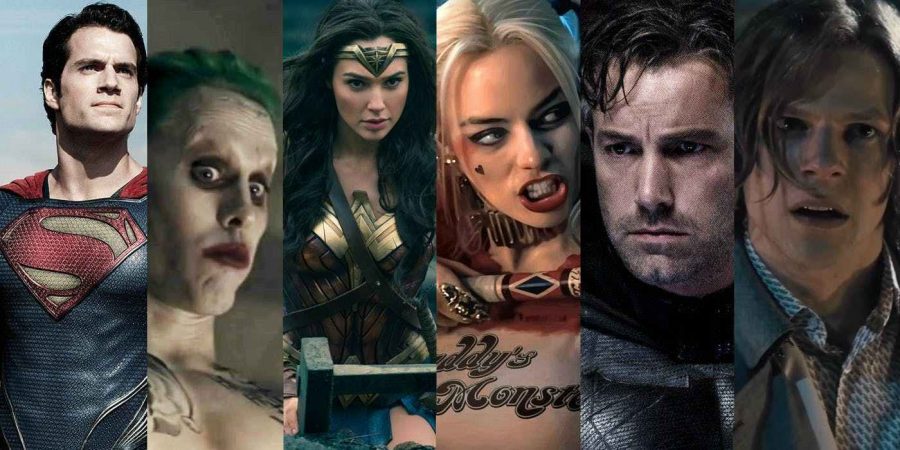 Superman, the Joker, Wonder Woman, Harley Quinn, Batman and Lex Luthor (in order of appearance, from left to right) all serve as flagship characters for the DCEU. Among these six, all but Lex Luthor received positive word of mouth from fans from a character perspective, while only the Wonder Woman movie of the same name earned general positive reviews.

The editorial staff at DC seems to greatly enjoy using the word “crisis,” as the word headlined over 20 major stories published over the last 50 years, most notably the 1986 industry piece “Crisis on Infinite Earths. Within the context of the DCU (Detective Comics Universe), crisis denotes events with grave effects on worlds within the greater multiverse, and no truer statement could apply to the DC Extended Universe (DCEU). Since the inception of the series in 2002 the series consistently faced behind the scenes trouble the release of Man of Steel.

Uncertainty cropped up during the production of Man of Steel, with easter eggs alluding to DC figures that would only exist if Man of Steel succeeded. Though the film did not fly with all audiences, it created a sufficient fanbase for future films and earned a respectable $668 million at the box office, enough to warrant Batman v. Superman, which went produced more smoothly, but both critic and audience reception dropped considerably, and box office numbers, while higher than before, fell below studio expectations.

Suicide Squad faced a similar fate the following August of 2016, making less money than the prior films and scoring even lower with viewers and critics alike. When Patty Jenkins directed Wonder Woman in July of 2017 faith was restored in the future of the franchise when the heroic Amazon lassoed in a respectable $821.6 million compared to the $873.6 of Batman v. Superman. These success were short lived, however. The release of Justice League resulted in severe indifference, or even glee, towards the low chances of survival for the franchise, as it made less than any other film in the series and reviews from fans to casual viewers tend to repeat the idea of mediocrity. As a result, the future of the DCEU seems progressively forlorn. Rumors of Ben Affleck leaving his role as Batman, while present since the release of Batman v. Superman, seem more frequent, and amid recent rumors that Henry Cavill may no longer portray Superman, fans of the films feel betrayed by the series.

There are potential solutions. The employment of someone as a head producer overseeing these films, not dissimilar to Kathleen Kennedy over at Lucasfilm, could certainly aid the most pressing problems. In Warner Brother’s defense, it seems this role already exists in Walter Hamada, current head of the DC Films department appointed in January of this year. The main reason a producer-led DCEU would yield better success than the current director mainly stems from the fact that after Justice League, the previous trajectory of the series, a showdown with Darkseid, vanished in favor of introducing the Legion of Doom, and this appeared only as a post-credits scene. If a strong leader existed, s/he would certainly assure that replacement director Joss Whedon follow Zack Snyder’s outline; adding in an individual with strong knowledge of the DC Universe could also only serve to benefit the series.

Among the more contentious parts of the DCEU, their slate of films rarely sit well with most fans. A large contingent of DCEU faithful now opt to create their own range of upcoming movies, due to dissatisfaction with the announced films. Likely the most common objection, no effort seems present to set up or even allude to any of the characters announced to headline their own films, like Lobo, Nightwing, and the Justice League Dark. Conversely, fans feel miffed that popular characters within the context of the DCEU, like Superman and the Flash, still do not plan to star in their own sequels. In the former case, the most news seems to suggest the Man of Steel sequel will die out in favor of a Supergirl film. For their sake and that of the fans, all movies featuring established heroes or those in post-production, like Shazam, should either face indefinite delay or outright cancelation; after all, two Joker movies seem rather pointless.

The final fix to the DCEU, and perhaps the most disheartening to hardcore fans, pertains to casting. While certain cast members, like Gal Gadot as Wonder Woman and Ben Affleck as Batman, tend to receive positive word of mouth from critics, others like Jesse Eisenberg as Lex Luthor or even Ezra Miller as the Flash do not. The upcoming Flash film seems set to adapt to the 2011 story Flashpoint, wherein the Flash creates an alternate timeline with new renditions of classic DC heroes and villains. Considering both the legacy of the story & its potential to course correct the franchise, the notion of recasting characters should remain in the heads of the WB suits. As for Affleck and Cavill, recasting these two characters definitely proves challenging, as both earned high praise from fans and critics, and as two-thirds of the DC Trinity, their absence would, in the minds of viewers, seem like a decision made for business rather than one beneficial for storytelling. However, considering the recent admission of Affleck into rehab and contract negotiations still occurring with Cavill, the notion that either or both could no longer play the character may not sound so ridiculous.

The DCEU, despite what forum posts and YouTube videos may say, can, and deserves to receive redemption. Potential exists within this universe, and considering the positive response to the trailers for Aquaman and Shazam, only a fool would let these heroes die. The series seems to lack a sense of direction moving forward, and no future movies look like guiding forces; however, if the right steps happen, the universe can realize its full potential.