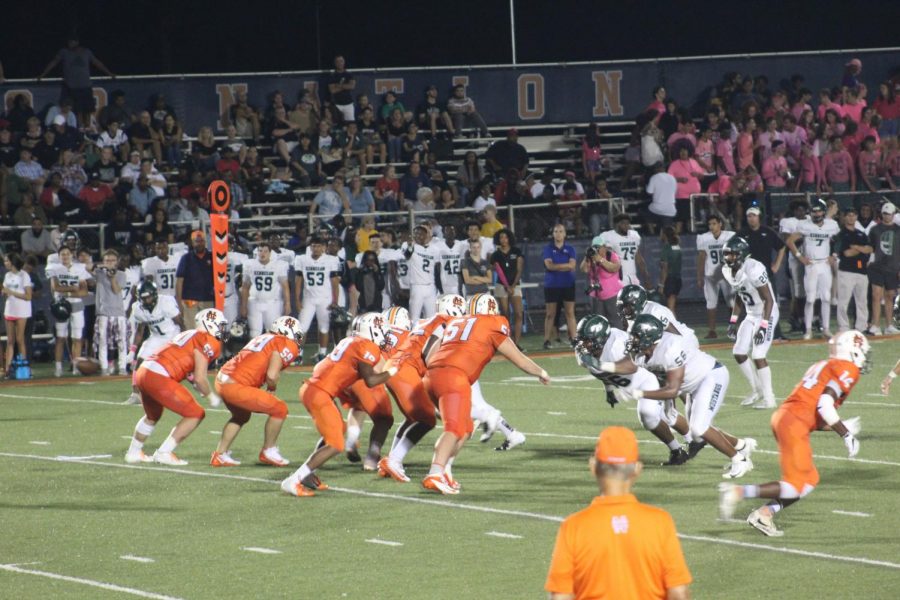 NC’s Varsity football team dominated the field against the Kennesaw Mountain Mustangs on Friday, October 5. With the pressure of pulling through with a win for the homecoming game, the Warriors managed an overwhelming victory on their own turf.

“Our defense played really well—I think overall we played a great game. Our boys were ready to play and our coaches did a great job preparing them,” Athletic Director Coach Williams said.

The Mustangs pushed forward with the first field goal and touchdown of the game, leading to rippling anticipation throughout the unsettled NC crowd. The Warriors made their first touchdown soon after and proceeded to carry the spotlight for the rest of the game.

During the first half of the game, the Warriors focused on their goal of making a two-point conversion—the first try of which ended unsuccessfully for the team. With two touchdowns already on the board, the unsuccessful attempt at the two-point conversion held them at the score of a 13-7 against Kennesaw Mountain. By half-time, the Warriors boasted a 27 point lead at a staggering score of 34-7.

Senior and wide receiver Christian Singleton scored five touchdowns out of the seven total, leading the Warriors down the path to victory against the Mustangs. Junior Tommieo Walker and senior Marcus Davis made the remaining two touchdowns of the game.

The crowd cheered fiercely for the team, sending the spirit of homecoming in the air and the expectation for victory against the Mustang rivals evident.

“We’ve been able to run the ball and establish a good physical presence at the line of the scrimmage,” JV Football Coach Jeffrey Bettis said.

With the team shooting for various two-point conversions and scoring multiple touchdowns, the Warriors triumphed and ended the homecoming game on a high with an ultimate victory against the Mustangs, 47-13.