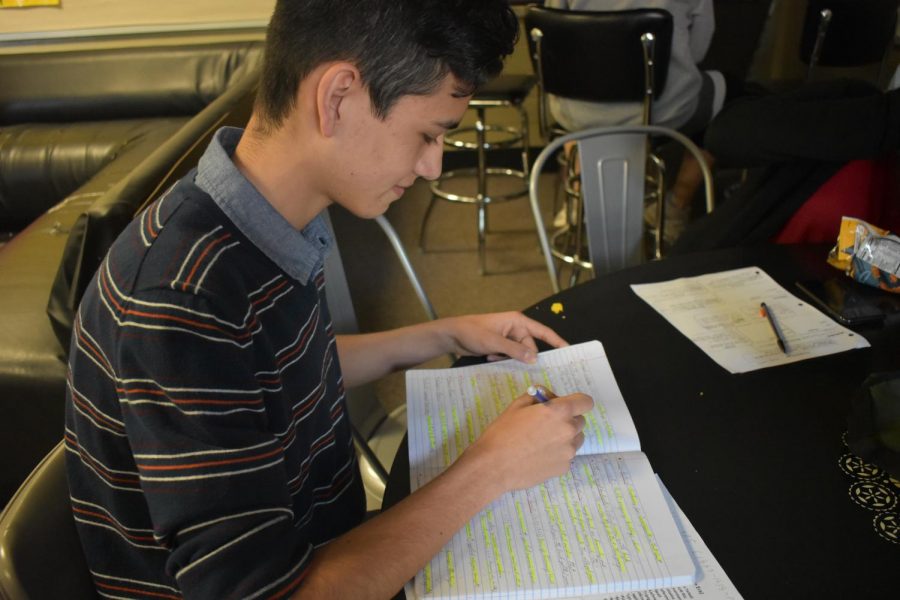 Junior Jose Chirinos focuses on his studies and participates in multiple clubs around the school including Model UN, theatre, and select acapella. Chirinos continues to build excitement about his opportunity in the magnet program. “Magnet has been incredibly interesting and very different from anything that I've ever been in before,” Chirinos said. Teachers brag about his successes and amicable personality in their classes. “He's always timely and turns everything in, its done 110% effort for sure,” Mrs. Essenburg said.

The United States serves as a beacon of light and a land of opportunity for myriad individuals. NC’s International Studies Magnet Program also provides students equal opportunities and draws together individuals of different backgrounds to learn about and embrace one another’s culture.

Junior José Chirinos, a student from Venezuela, came to the United States in the middle of his 8th grade year and swiftly exited the Awtrey Middle School English to Speakers of Other Languages (ESOL) program at the end of that year. Chirinos soon surpassed the on-level limits of his studies, despite his originally on-level filled course load.  After a brief layover in the world of Honors classes, Chirinos felt it time to apply to the NC International Studies Magnet program.

“On-level was way too easy, and Magnet offered a challenge that I needed,” Chirinos said.

“We have one to two students a year who join the program at the start of 10th grade,” Magnet Coordinator David Stephenson said.

In addition to the rigor of entering the Magnet program freshman year, starting his journey in the program his sophomore year presented a demanding challenge. However, Chirinos’ teachers speak highly of his success and work ethic within their classrooms.

“José is one of my favorite people; he is an amazing student and has an incredible work ethic,” Literature teacher Jenna Essenburg said.

Along with his school work, Chirinos immerses himself in various school activities, such as Model United Nations, chorus, and theatre. He first participated in the musical Hands on a Hardbody his sophomore year, where he fell in love with the theatre community at NC. He currently participates in the One-Act competition piece Suite Surrender, which will have its opening night on Wednesday, October 24.

Chirinos’ story resembles the journey of the American Dream as he strives to succeed in his academics and future.

“The American Dream is about coming to America and having everything you couldn’t have where you came from. I believe I am working on it right now, and I am not quite there yet, but I think I can get there,” Chirinos said.

José sets high aspirations for his future and plans to possibly attend Emory University or the University of Georgia to study science. Chirinos wishes to pursue a career in zoology or become an obstetrician.

“I want to pursue something in biological science or biomedicine. I really like science,” Chirinos said.

Chirinos remains grateful for his opportunities in America and for the people who have helped him in his continuous trek.

“So many people have helped me, literally every teacher that I have had. Teachers inspire me everyday. They made me realize how I can be a better person. My family is always there with me; they support me and they tolerate me. It’s a real blessing,” Chirinos said.