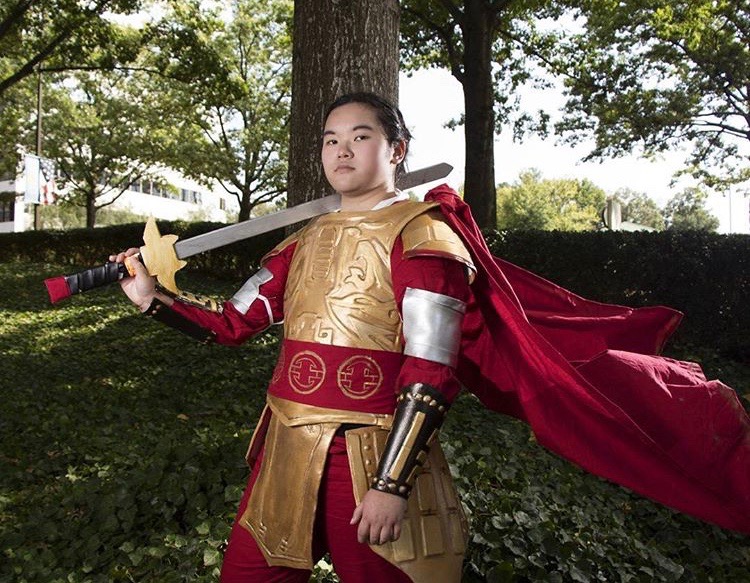 Livia Eppett cosplays as Disney’s warrior Mulan for Anime Weekend Atlanta in 2017. Eppett has participated in cosplays dressed up as a wide variety of characters from animes, movies, and other tv shows. “I make all my outfits–I gradually have come onto competitions because of them,” Livia said.

Spreading among today’s fan bases, cosplay continuously faces criticism and misconceptions from those who do not directly involve themselves in this phenomenon. Juniors Livia Eppett and Catalina Andrade embrace this fascinating part of their lives that act as a rewarding consumption of their time.

For years, Eppett and Andrade contributed to the growing community of cosplay. The energy of their fellow cosplayers and the desire to take a step into the world of their favorite animes drew them to cosplay as well as video games, shows, and movies.

“I found a show on the Internet one day and I was like ‘What is this?’ and then I was like ‘Woah this is so cool!’ I found out there was a convention where other people would be dressed up, so I wanted to dress up too and be included,” Eppett said.

Catalina discovered cosplay through a similar experience, which led her to cosplay one of her favorite anime characters, Hanayo Koizumi from the show Love Life. Eppett and Andrade have participated in cosplay at several conventions where they dressed up as Japanese anime, Disney, and Harry Potter characters.

“I’ve done Momocon, Anime Weekend Atlanta, Dragoncon, Seishuncon, Taigacon, and I would like to go to Katsucon in Maryland,” Eppett said.

The girls gradually became drawn to a community that offered an interesting way of coming together with others that they could relate to. With the same hobbies, likes, and dislikes, Andrade and Eppett found a small circle that did not require them to conform, but instead encouraged them to embrace their individuality.

“You feel this in schools a lot where you have to fit into a clique. The people who are considered more nerdy or geeky want to find their own group, and [in cosplay] you’re able to be unique with other people and have fun. It’s inclusive, and at the same time you can express yourself. It gives you a chance to find your identity,” Eppett said.

Andrade also landed a certain confidence and connection with others when it came to participating in cosplay, receiving compliments from a variety of people, and forming friendships with fellow cosplayers.

“Through cosplay, I make more friends out of just people approaching me. People are supportive and they’ll be like ‘Oh, you’re so cute!’—it just boosts my confidence and makes you feel a lot better about wearing your cosplay. It also provides an outlet for more people to reach out to you because they recognize the character you’re cosplaying as; you’re not just wearing your regular clothes,” Andrade said.

“Cosplay was also like an attention thing. I’m at a convention, and I’m like ‘Yeah take pictures of me!’ I was just drawn to it because I kind of wanted to be the center of attention,” Andrade said.

With the future of their unique passion in mind, Eppett and Andrade expect to continue cosplaying with other members of the community for the next few years until their educational endeavors consume too much of their time.

“I’ll keep going, but I’ll probably stop in college. If I start again, it’ll be in group cosplays with friends. I saw some older people at Anime Weekend Atlanta who were dressed up like Mario characters. It was really cute actually,” Andrade said.

With plans of pursuing music for the orchestra in her spare time, Eppett finds that this hobby may also draw her away from cosplay in the future.

“I won’t permanently stop myself. I’ll gradually work my way off [cosplaying] with college and music,” Eppett added.

Cosplay stays on the radar for these two committed participants as it provides an outlet for not only creativity and aesthetics, but for friendship and unity as well.