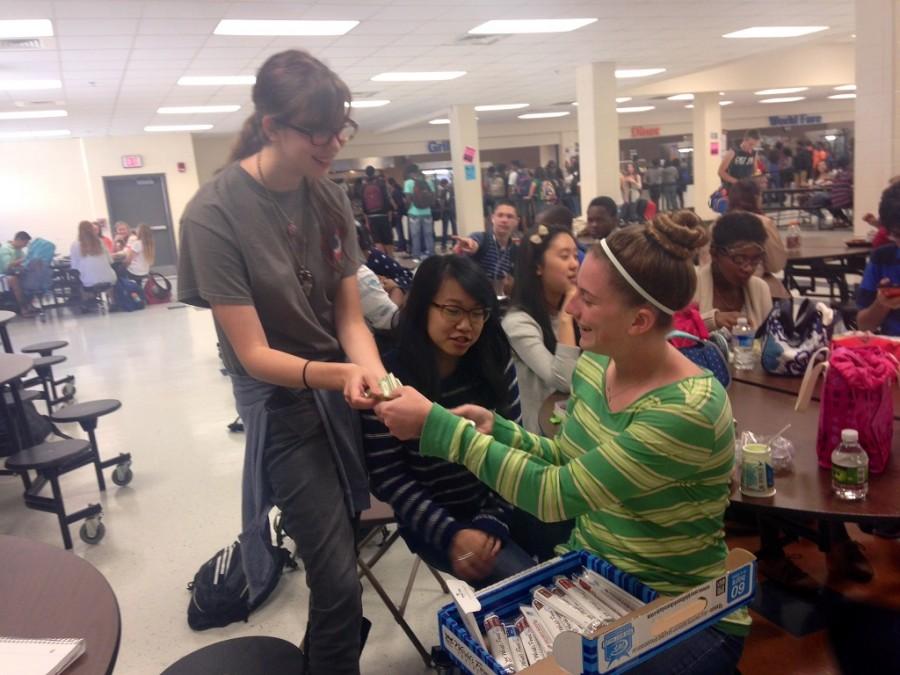 With all the new health regulations put in place this school year, students at North Cobb have lost quite a few of their normal snack foods, such as the morning chicken biscuits or the school store products. Students desperate for something other than vending machine or lunch food were relieved when orchestra began selling chocolate again for their 2014-2015 fundraiser.

“I’m so happy that the chocolate is still here,” said senior Shelby Szucs. “We need variety in this school, especially compared to last year.”

Other students feel the same way. “I love the chocolate because the food isn’t very good at school, and the chocolate has sugar and energy to help you get through the day,” said junior Hope Desimone.

But how can orchestra still be selling chocolate with the new health regulations?

An informational meeting was held early in September for anybody who was interested in participating in any type of fundraising activity that used food. This meeting ensured that anyone who fundraised with food would not violate the law.

“The health restrictions were mandated by the Healthy Hunger Free Kids Act, with restrictions on what we can sell and how much we can sell,” said administrator Mr. Revard. “There is criteria that foods must fit under in order to be sold at school.”

If foods cannot fit that criteria, a waiver is needed to sell those items. If the waiver earns approval, the club or organization can sell the requested items.

“Orchestra has been one of the first to really step up,” said Mr. Revard. “They filled out the appropriate paperwork to comply with the legislations and started selling candy bars.”

Other organizations were not as lucky and were unable to fundraise because of the restrictions, including Mr. Revard with selling chicken biscuits.

“The school loses about 700 dollars a week now– money that used to be used for student leadership activities and other activities that go directly to the students,” he said. “But orchestra is doing a great job, because they’re still working within the context of the law and they’re selling it at times in which they are allowed to sell.”

Of course, other ways to fundraise without food exist, but food is one fundraiser that usually proves most successful because students crave snacks.

It works out well for orchestra either way as they continue to sell chocolate.

North Cobb’s students will likely keep buying the chocolate for as long as it’s available, both to eat something tasty or to support the orchestra program.

“The chocolate really adds to the options of the school, which is why I keep buying it,” said junior Leah Jean-Francois. “I’m really glad orchestra was allowed to keep selling.”