To pledge indifference to the flag: History of student views of the flag at NC 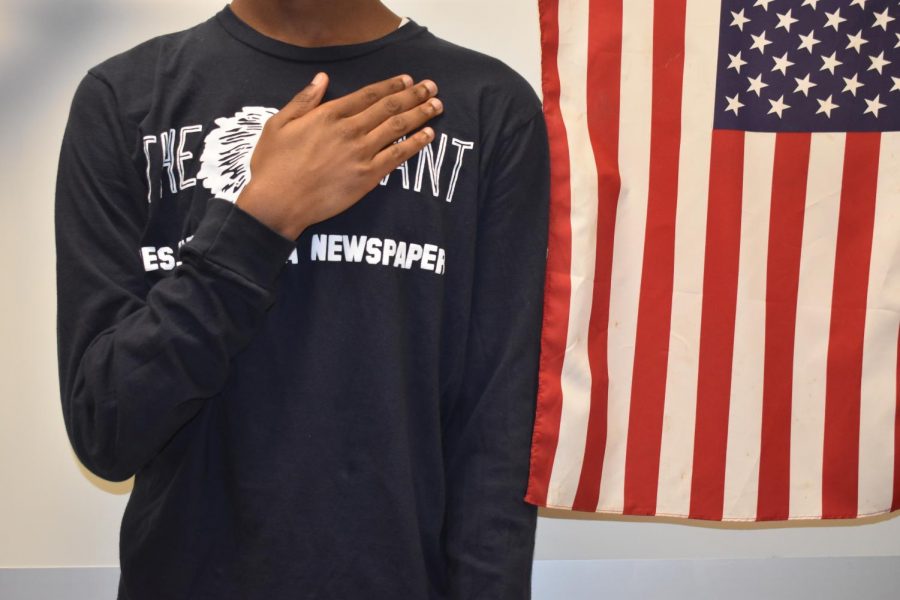 The issue of respect given toward the flag in schools by students tends to serve as among the more contentious debates in the country. In the specific context of NC, no rules within the latest of the student handbook actively discourage or support standing for the pledge. Regarding more active forms of desecration of the flag, while no reference to that exists, the danger presented by a fire would preclude a burning. As for stamping on a flag, that would likely result in disciplinary action, assuming it disrupted the normal flow of the day.

Of all the qualities, positive and negative, that define the United States, national pride almost always enters the conversation. From the playing of the national anthem at most sporting events (particularly baseball and football), to the two separate musical marches dedicated to the nation and even the surprisingly detailed flag etiquette, patriotism served as an extremely potent force in our nation since its inception. However, as the golden days of the World Wars passed and we entered the years of Vietnam and the counterculture movement, it seems like pride in the nation and especially its flag has waned, with examples ranging from the burning of the flag to something so unusual as using the flag as a napkin. This trend affects not just the adults of the world, but the youth as well, as a fair contingent feel apathetic (or openly discourteous) toward the flag; unsurprisingly, this prompts opposition from those who choose to honor the flag. In a copy of The Chant dated October 24, 1990, a short article, published by former NC student Chris Crocker discussed the issue of respect for the flag, more specifically why NC students should do just that.

The story, titled “Americans Should Respect Flag,” brings up the argument that disrespecting the American flag in any form or fashion “is not using your freedom wisely;” more specifically, Crocker refers to the burning of flags. While one could reasonably assume that such an occurrence happened at NC (as there exists no real reason to publish this story unless as a response to that manner of activity), no records of burning flags exists. While reading the brief piece, one would think that the issue of flag burning impacted NC students to some degree: later on, Crocker twice questioned why one would feel so compelled as to disrespect Old Glory, questions seemingly directed toward readers.

However, the exact opposite seems true. In that same issue of The Chant, a story titled “Politicians, Corporations Taking Advantage of Patriotism Movement” covering a topic not dissimilar to this one argued against the outrage regarding flag desecration; the writer claimed that rather than the flag, the values of the nation it represents truly matters, and views punishment for flag desecration as tantamount to “change[ing] the First Amendment.”

Comparing the conflicting values of then with how students view the issue now, at a glance, it seems as if the majority lacks a real sense of attachment toward the issue. While students vary in their choice to stand at attention or remain seated, neither action seems rooted in a sense of ardor toward the issue. When one looks a bit deeper into how students feel, though, a good bit of decision making reveals itself.

Even deeper down the rabbit hole of this debate resides the more conflicted students, those who feel obligated to make either choice.

“Individually, I try my hardest to make sure that everything I do is respectful towards the flag; not just the code, but I do stand during the Pledge. But I know others that may be in compromising positions that may lead them to disrespect or not show proper attention and respect to the flag. For example, a minority student in ROTC may feel oppressed in this country, but they have an obligation to stand to arms: that’s something hard to deal with,” senior Zaarah Ukechir said.

Later on in the 1990 article, Crocker brought up a rule from the US Flag Code, a set of rules dictating how: “Display of the flag is a sign of respect and love of the nation. The U.S. flag will stand in front of or on top of flags from other nations or state flags. No disrespect should be shown to the flag. The flag should never be displayed with the Union down, save as a signal of dire distress. It should never touch anything beneath it, such as the ground, the floor, water, or merchandise. The flag should never be fastened, displayed, used, or stored in such manner as will permit it to be easily torn, soiled, or damaged in any way.” Given the context of its 1923 establishment, slight favoritism towards the US makes sense. However, considering the tendency of 1990’s youth to cast off the past in favor of a new future, the idea that any student could see this etiquette as extraneous does sounds unlikely; again, The Chant published a pseudo-opposing article on the matter within the same issue.

As for the NC students of today, they seem less fond of the code, more specifically how it positions this flag compared to those of other nations. In his story, Crocker mentions a public law, which seems like an expansion of the flag code in regards to our flag in relation to those seen internationally. It reads, No person shall display the Flag of the United Nations or any other national or international flag equal, above, or in place if, the Flag of the United States within the United States or any Territory or possession thereof; essentially, the United States flag must remain the highest flying flag in all situations— no exceptions. Adopted in 1953 during the height of the Cold War, this law more than likely existed as a way to promote American values and foster national pride; that manner of thinking, while once considered patriotic and noble, seems not to sit well with the NC students of today, who feel this rule defeats the purpose of the UN.

“I think it’s arrogant because [the United Nations] is supposed to be a unity of nations, as one; by implication, that would make everyone equal. It’s kind of unfair to have us and our flag be above everyone else’s because it makes us seem very smug and almost condescending, and there’s no real reason to even do so,” junior Catalina Andrade said.

The last claim the story makes regards the issue of pride in the flag and the nation. Crocker states that those who ratified the above displayed law took “pride to be a part of this country and…the glorious flag…flying above your heads at this moment.” Looking at that other article, it shows the divide, at least among former Chant writers, regarding the issue. The author of that story, Carlos Tejada, seemed to see the flag itself as auxiliary to the issue, asserting that respect for the nation encompassess “more than a lot of flag waving.”

As mentioned above,contemporary NC students tend to not care about this issue. However, while this may seem commonplace for the students, this could come off as troubling for others, considering how passionate adults seem for this issue. But as strange as a reason this may seem, perhaps those indifferent to the issue feel that way due to contentment with the status quo.

“I think there are people who are against [respecting the flag] or say something negative about it, but they’ll still stand. [Debates regarding the respect the flag deserves] are just not a great enough concern to do something or change how we see the flag. That’s the most that I myself see, but most others take it without question; very few people, that I see, will not stand, at least out of protest or desire for change,” Andrade said.