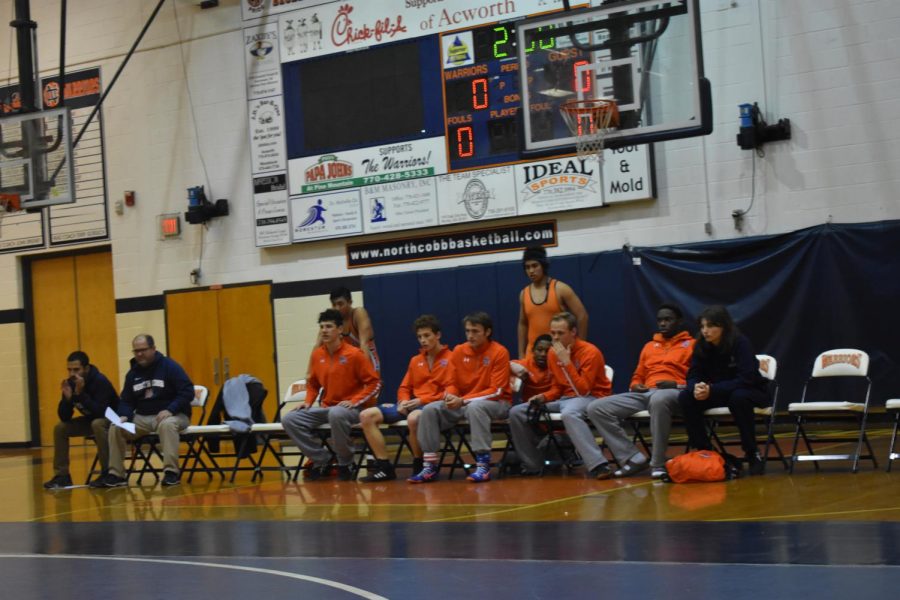 At Wednesday’s match against the Harrison Hoyas, the Varsity Warriors Co-ed Wrestling team observes one of the bouts; like with all high school wrestling matches, a wrestler will face off with their opponent in three rounds, each lasting 3 minutes. This applies to all twenty-two members of the team.

Winter approaches NC, and with it comes the seasonal sports: Cheerleading, Boys Basketball, and Swim/Dive all hold a place in the heart of the school; however, one sport in particular tends to remain unsung and therefore piques a fair share of interest: wrestling, specifically wrestling for the Male Varsity team. With their season just starting this past Wednesday in a (junior) varsity faceoff against the Harrison Hoyas, an early season preview seems pertinent, both for fans of our team and those who perhaps would not attend a match.

The 2018-2019 wrestling season started Wednesday, November 14 in a (junior) varsity match against the Harrison Hoyas. The Warriors lost this match in a 34-42 set. The boys put up a valiant effort despite the loss, as it took all of the matches to reach that point; however, a tournament occurred the previous Saturday, November 10, wherein NC faced off against Harrison, Sprayberry, Westminster High, and four other schools. The results of the match, while not necessarily optimal, still paint a bright future for this season.

Indeed, despite not exactly reaching the levels desired by Bettis Bettis, these results definitely raised the expectations for the team this season.

“Our expectations for this year are hopeful. We have seen steady growth between last season and this season. We’re hoping to send double the amount of kids from our regular season to Area Tournament, and from Area Tournament to Sections; we’re expecting to get a handful of wrestlers to the State Tournament; that’s our main goal. We’re still a budding team, so our Area Championship and our Region Championship may be difficult to come by, but we’re looking to increase our numbers overall in the program at Region Tournament and at the Sectionals Tournament, and State ultimately”, Assistant Coach Cortes said.

More than any other sport, wrestling demands incredible levels of discipline, enough to make the desire to outright quit sometimes enticing. So it would stand to reason that the Warriors need a solid routine to get them through their practice sessions, and they do indeed possess such a system. Just as important however, the team relies upon a cogent support system.

“Pushing each other to do our best, helping each other to get through tight situations during a match, all of that helped us to beat the opponent. The repetitive nature of our exercise helped as well, as they [Coaches Bettis and Cortes] wanted us to make sure we know what we’re doing, and they want us to keep us doing it over and over and over again, repeating what we do; so it’s just done naturally during a match”, sophomore Aiden Joyce said.

Despite devolving into one on one bouts, wrestling still fits the “team sport” mold: the group dynamic pushes members to better each other, and the group as a whole, and expectations run quite high this season, not just among the coaches, but team members as well. Victory comes to mind, and for fairly obvious reasons. Besides that, the interpersonal relationships of team members comes with its fair share of outlooks.

“I mean, I expect us to win a lot; he [Coach Bettis] constantly says how we’re so much better than the team that they were last year. We have a lot of new people, and we’re putting more effort into our work. I wasn’t a part of it last year, but I can tell we’re putting a lot of effort into it. [Coach also expects] a lot of learning and a lot of growing, being able to learn off and help each other improve. The team bond should also strengthen: all of us get along well, it’s like one big family, [based off] just friendship and all of us wanting the best for each other”, senior wrestler Eidan Iglecias said.

Within the team members themselves, there seems a strong sense of satisfaction, with both individual members and the collective; despite this, they seem acutely aware of gaps in their performance, as well as why those gaps exist. One of these disparities seems more like a result of a busy schedule than one of a deficiency in skill.

“Everybody’s being strong and tough, but what we most need at the moment is time; that way, they can practice their technique; because while everyone has a little understanding, their technique isn’t as strong as it could be. So with a couple months, maybe even weeks, we can improve our technique to the point where we’re a top caliber team”, Team Captain John Koroly said.

Beyond sharpening their performance, the Warriors must also deal with the issue of rival schools and their wrestling teams. As any NC student can attest to, the school faces stiff competition in all sports from schools like Harrison, Kennesaw Mountain and Allatoona. One school to note, Pope, managed to win the Dual State Tournament from 2011-2014, and the Individual Tournament from 2011-2013; however, in the eyes of the boys, the school they see as the biggest threat tends to remain relatively overlooked.

Despite this, what the Varsity Warriors lack in size, the team more than makes up for it in terms of grit, and perhaps more importantly, a powerful interpersonal bond with each other.

“Our team has almost tripled in size since last season, so we’re going to have a lot more competition, and I can already see people coming together more, more as a family; we’re more than a team now, and I love how everyone accepted everyone new: there was no gap, no separate groups on the team. Everyone’s a family and we’re just going to use that to push each other”, Dasher said.