Addictively connected: Understanding when social media and the Internet becomes too much

Our generation today functions in a digital age. From hearing news, reading, shopping, or socializing, the average person checks his phone at least 47 times a day. With that much attention to a singular electronic device, one may unintentionally disconnect themselves from the world around them. Soon, these individuals lose touch of reality, create psychological and personality complications, and potentially place themselves in harmful situations. This question then arises: How can one limit his or her Internet and social media craving to prevent further addiction?

At an early age, children become introduced to electronics such as televisions, phones, or educational video games. These young minds develop into prematurely programmed brains that normalize these devices and grow accustomed to constantly using them. As kids age and learn more about the web and all its pathways, parents then must monitor their children’s activities. Attracting individuals of all ages, social media provides open access for strangers into kids’ personal lives.

“Most parents are doing the right thing by keeping their young ones off the Internet because strangers can easily take advantage of children. They can force children to give private information, putting themselves and their family in danger. I don’t think children under the age of thirteen should have any form of social media at all, it’s something that just isn’t worth the risk,” junior at Lassiter High School Nathan Kaimathiri said.

Social media platforms such as Tik Tok, formerly known as Music.ly, Instagram, and Twitter grant young children access to a vast amount of content, including content that most parents would not find appropriate for their young children. These social media platforms request individuals to share their full name, age, phone number, and location. Most of these social media sites require members to identify as age thirteen or older. With such a young age bar, children easily become exposed to multiple dangers on the web.

Now surfing the immense web, kids can post, share, view, and comment whatever they wish while placing themselves in open positions for strangers to reach out to them. The New England Journal of Public Policy argues that children may experience lasting trauma because they now identify as victims of sexual predators. An online child predator’s main goal lies in building trust in children. Once that foundation forms, predators then ease their way into discussing explicit topics with children such as sex and drugs. About 90% of cases proved that offenders engaged in both oral and physical sexual intercourse with victims. This problem not only affects young naive children, but also teens who constantly use social media. The older the child, the more clever and tricky the stranger will grow to gain that much-needed trust.

The dangers of social media and the Internet as a whole engulfs users into an unhealthy cycle. The more time individuals spend on these platforms—whether that includes communicating, posting, or surfing the web—the more their lack of productivity will increase.

Social media and the internet as a whole, provides a source of mental unproductiveness and effort when referring to the main usage from teenagers. Slowly replaced by digital versions, textbooks and course reading material may soon turn into items of the past. Although this method engages students more effectively, online homework allows more students to seek answers from the web, rather than finding the answer themselves.

“Students can easily get distracted from their projects or assignments by what people are posting. Some people may argue that they use the Internet to help them with their work which may be true, but that just proves that they’re getting distracted in class because they have to depend on the Internet for answers instead of the notes that teachers provide encourages them to take in class,” freshman Alyssa Maclellan said.

Maturing from adolescence to adulthood in this digital age may create negative social setbacks. In today’s society, communicating and making friends online proves easier then doing so in real life; 57% of teens created digital friendships from the ages of 13 to 17 on social media platforms. These digitally-founded and computer-connected friendships remove teenagers from people who surround them in reality.

“Teens today are still socializing, but not with the people who are physically present with them in the moment.  They may be in the classroom, or at a party, and they are on their phones, communicating with people who may be very far away, or watching videos of people that they barely know. So they don’t know how to interact organically, in person, resolving ambiguity during conversation,” French teacher Linda Cotton said. 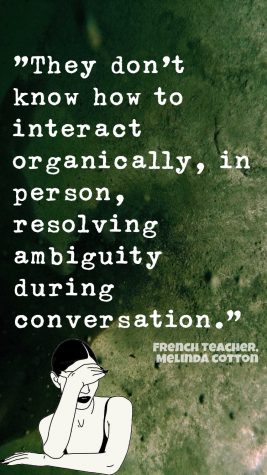 These awkward traits that teens now experience may affect them in multiple aspects of their life as they age. This can include preparing for an interview or working well with others—either peers or customers—in their field of work.

“They have a greater chance of being rejected in real life because the person they are trying to talk to may also be on their phone, unwilling to interact in real life, so it becomes a vicious circle. They stay on their phones more in order to not have to feel the awkwardness of real life conversation, then they lose their conversation skills, which aggravates the problem,” Cotton said.

Internet users consistently search to find the next popular trend. On platforms such as YouTube, Facebook, and Twitter, videos constantly interchange between users to convey both positive and negative messages. Social media creates problems that individuals view as a psychological disorder.

“Social media is a like a drug for our generation. My friends and even myself sometimes are addicted to it. I don’t look at social media as a problem for everyone because most are able to control themselves, but for some they need to limit themselves by creating personal reminders of when it’s time to get off,” junior Moses Gichara said.

Some of the most influential people in today’s media for both teenagers and young adults include fashion icons, actors, athletes, singers, and viral Internet stars. Simultaneously, these individuals actively use their social power to promote and release  merchandise, videos, ideas, movements, or social events to their audience. Doing so, these social influencers further increase their spectators Internet activity. When a teenager lives their life behind a screen watching the lifestyle of others, one may easily feel compelled to imitate trends exposed to them. Social media, built on the foundation of followers, generates these trends to represent content or even people considered worthy of “having clout” or immense popularity. Living in a generation where users persistently attempt to create the next trending video or idea forces individuals to steal and emulate content from others to fulfill their own desire of standing in the spotlight.

“Clout chasing is knowing someone who already has fame and then copying it or in a way piggybacking off of their ideas to get fame yourself. Clout chasers don’t have to be fans, they sometimes are people who hate those they copy from but try to do it better,” Gichara said.

Once receiving this attention, individuals gain a stimulating pleasure from knowing they can enjoy their fifteen minutes of fame to post innovative content, viewpoints, plans, and anything else they may want shared with a larger audience.

“These imitators never last long. They boast in their success because one video or picture got them known, but after a while when they try to post their original content. The followers that they once had slowly disappears. Their fame is never genuine and neither are the people,“ Gichara said.

The negative effect and dangers of social media and the Internet outweigh the positives. As technology improves, the addiction of always feeling connected expands further. Hopefully, with more awareness, individuals may address the issue and control their problem instead of ignoring it and allowing it to grow further.