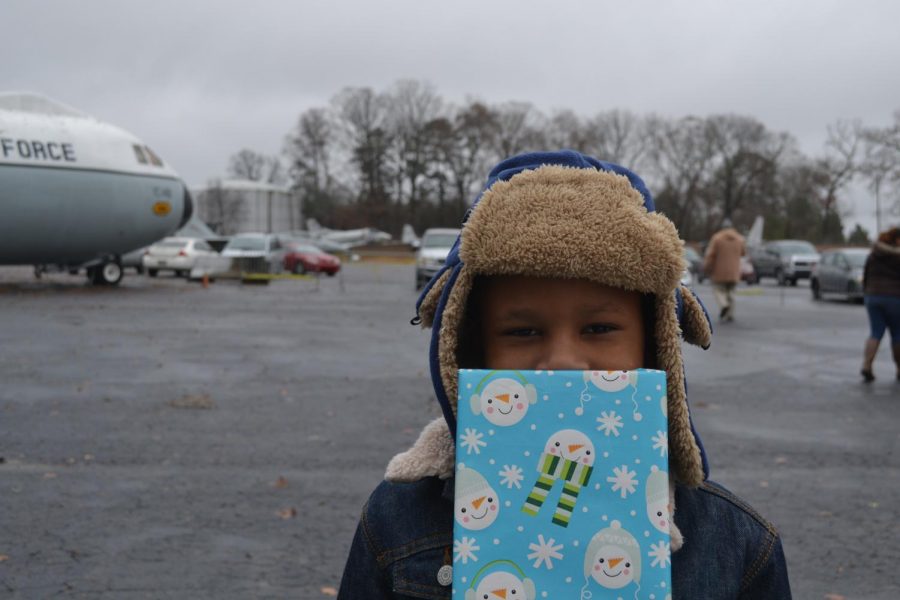 Throughout the year, Dr. Hilliard gathers toy donations from supportive community members to then transform them into new presents for the kids. “It was super cold, but I’m happy I got to see Santa. He gave me Checkers which is my favorite board game, I’m so going to beat my sister when I go home,” guest Trew Grant said

Giving back to the community once again, chiropractor Dr. Louis Hilliard hosted his annual Santa’s Coming to Cobb event at the Aviation Wing of Marietta on Sunday, December 9. Looking to spread Christmas joy, Dr. Hilliard celebrates the holiday with local families and supporters in different locations around Cobb every year.

“I’m the man! I gotta take it back to the community. That’s what it’s all about. Everything I’m doing is worth it. When things are tough and the tough gets going, if you’re still sacrificing and still out here for the kids and families, God is going to continue blessing you,” Dr. Louis Hilliard said.

The Aviation Wing of Marietta gladly agreed to help Dr. Hilliard fulfill his heartwarming vision and create a new and exciting twist to Santa’s arrival by flying Santa into the crowd on Aviation’s own helicopter. Unfortunately, because of the gloomy overcast Sunday afternoon, the Aviation team swiftly changed plans. Instead of flying Santa down to the children, local Marietta firefighters escorted him in their vibrant red fire truck, resembling Santa’s original sleigh.

Santa’s arrival commenced the start of a lively event. Although the cold, misty weather forced families to huddle closer together for warmth as they waited in line to see jolly old Saint Nick, Dr. Hilliard and his team refused to let the holiday spirit fade. Together, Dr. Hilliard and Santa’s helpful elves pranced around greeting families, dancing with kids, and passing out candy canes. As the line of people continued to move rather quickly, Aviation team members guided families inside a U.S. Air Force airplane decorated from top to bottom with Christmas decorations. Inside, children enjoyed the opportunity to talk to Santa up close and personal, take pictures, and receive a gift from the number one gift-giver himself.

“I work at the Aviation museum, and this is the first time that Santa has come here. This is really new for all of us, but we’re hoping that they will come back again next year because I think it’s really neat to come together inside an airplane,” community member and museum worker Bob Higgins said.

Santa’s Coming to Cobb, an event that first started with a couple of toys, about five children, and a man with a bright idea, turned into a popular holiday event for the whole community in 2005. From there, Dr. Hilliard continued to gain more support and donations from all over Cobb and further grew his team and platform.

“I’m here filming for Dr. Hilliard with my production company Macintosh Bros. I’ve been working with him for about three and a half years now. Every year we come out to make a two-minute video showing how he gives back to the kids and community,” videographer Jabriel McIntosh said.

Parents and children conversed with one another, told jokes, and sung along to the holiday music blasting through the speakers. The weather failed to put a damper on the joyful crowd and brought families closer together. Dr. Hilliard, an ordinary man with a huge heart, sparked a festive movement that continues to provide for those who need it the most.