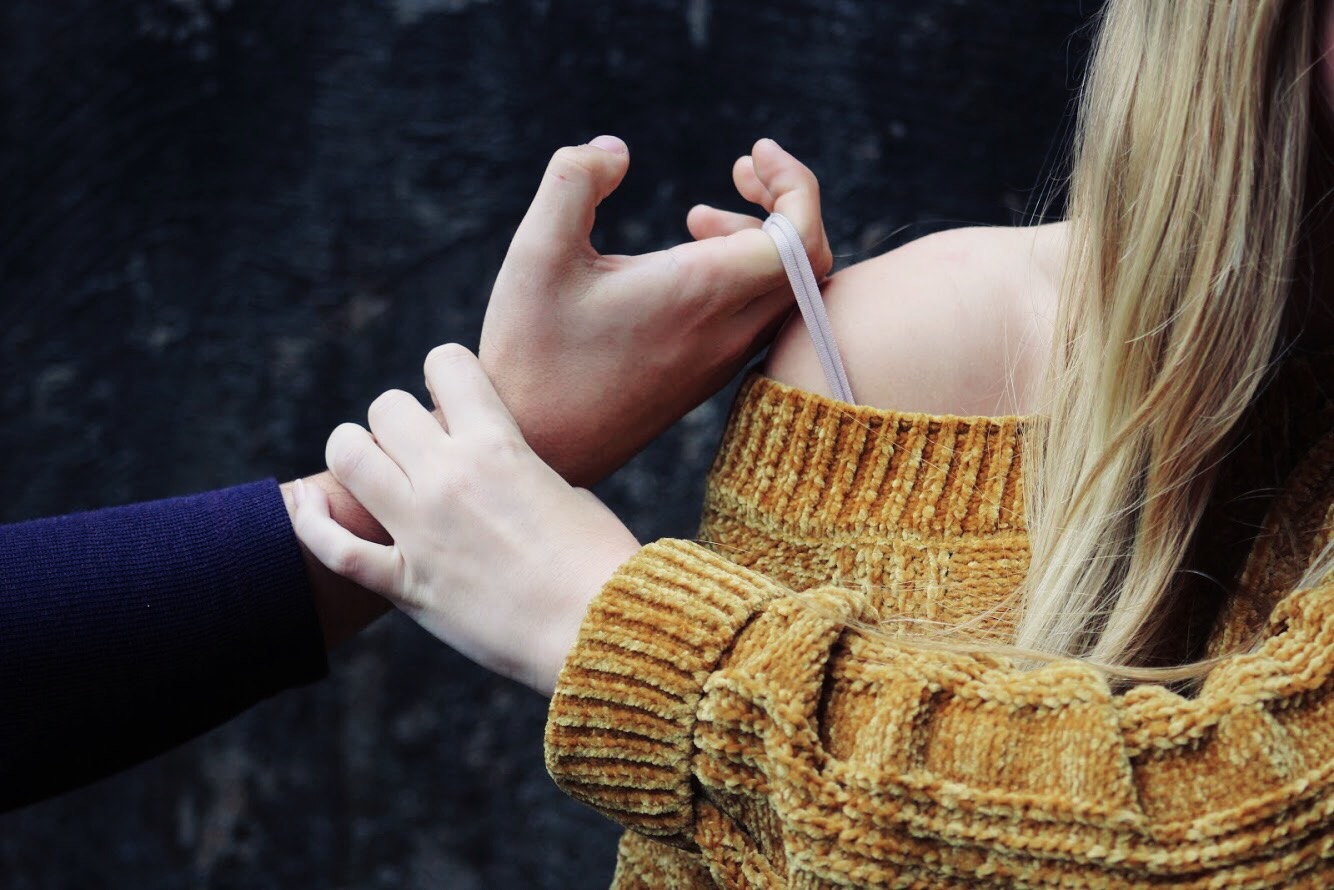 Sexual assault continues to exist as a hot topic in both local and national media. Despite its continuing presence on college campuses and high-density cities, people often disregard its lasting effects on an individual. (Tara Anastasoff)

Sexual assault continues to exist as a hot topic in both local and national media. Despite its continuing presence on college campuses and high-density cities, people often disregard its lasting effects on an individual.

A voice for the voiceless: The truth about sexual assault

In the United States, one in every five women will become a victim of rape. That woman— somebody’s daughter, mother, and best friend—will forever spend her life haunted by the terrors of the event. After an event of sexual assault occurs, the victim often tries to brush the event away and pretend as if it never happened. They feel scared, dismayed, and broken—and shockingly, 63% of sexual assault crimes are not reported to the police. On college campuses, that number of unreported cases rises to 90%, meaning that a young woman will often walk through her school alongside her perpetrator.

“I feel like there’s a stigma around people who have been sexually assaulted, like there’s a lot of victimizing of the woman. It’s already a traumatic enough experience, and pressing charges means the victim will have to relive it. People just keep asking questions and I think it’s hard to talk about it again because a lot of people don’t view sexual assault with an open mind. People are always asking what the victim was wearing and if they were drinking,” senior Christine Call said. 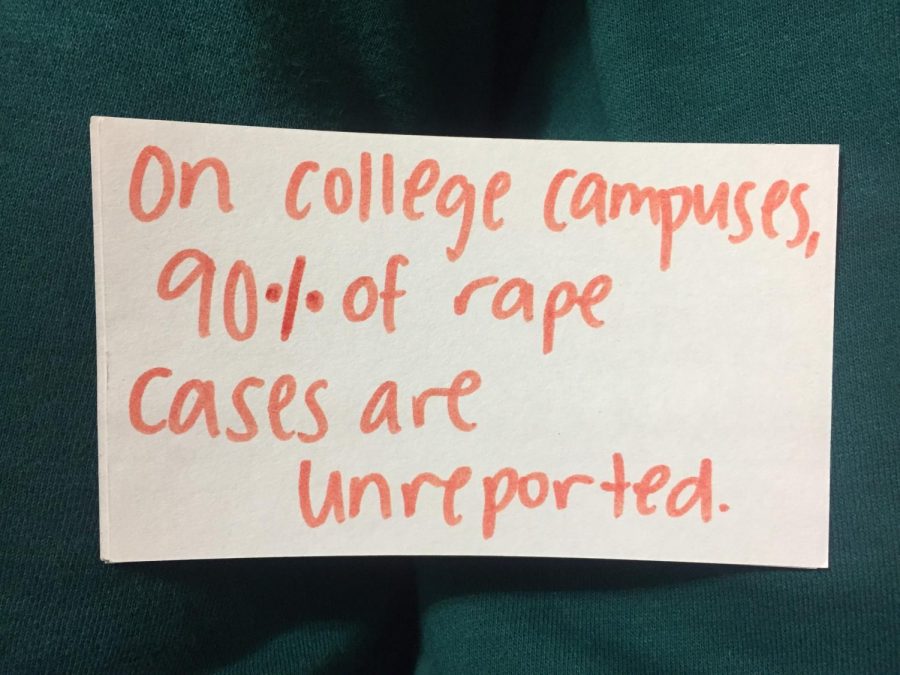 During President Trump’s first two years as POTUS, 22 women have filed sexual misconduct allegations against the nation’s leader. Trump denies all 22 cases, reporting that each woman fabricated her story and he never engaged in any unwanted sexual behavior. Holding a position of power in the country and refraining from properly addressing the allegations provides a subpar example for the young, developing minds in this country. What are we teaching children if we allow a rapist to lead the country?

“I don’t think it’s fair that Trump is in office after having so many women accuse him [of sexual assault], it makes it seem like it’s okay,” senior Ralph Lacandazo said.

Still on location in Capitol Hill, newly-appointed Supreme Court Judge Brett Kavanaugh faced a very public hearing where former classmate, Dr. Christine Blasey Ford, accused him of sexually assaulting her during their high school years. Rather than supporting her story and believing her, many people blamed her for fabricating the story and accused her of seeking attention and trying to destroy Kavanaugh’s career.

“I think she was definitely sexually assaulted, but I don’t think Kavanaugh was the guy that did it. She withheld that information for a long time, and then when he was becoming a Supreme Court Justice, she withheld that info until the hearing. It just seems suspicious,” senior Reed Walker said.

By allowing men who hold elite positions fail to take responsibility for their actions, it suggests to children, especially young boys, that they can get away with sexual assault and rape.

“I think children feel like men in power can get away with sexual assault, and it makes me nervous because if people like that know that there won’t be any repercussions, then they’ll continue to do it,” senior Nico Eastep said.

Sexual assault impacts more than just a woman’s immediate feelings. According to a report released by the Center for Disease Control and Prevention (CDC), 81% of women disclosed significant long or short-term impacts of Post Traumatic Stress Disorder (PTSD) from the event.

The fear and prevalence of sexual assault makes women walk faster on the sidewalks, keeping their heads down and their keys gripped tightly between their fingers. Instead of a society teaching women how not to draw attention to themselves through skimpy clothing or flirty behavior, society should focus on developing respect for one another and teaching consent and healthy sexual behavior rather than sweeping the topic under the rug.

“It makes me concerned for the victims [that we don’t talk about sexual assault]. I think we should give victims a safe and worry-free path to speak their truth and make their statement heard, which is an uncomfortable situation no matter what,” administrator Mr. Kiel Southwell said.

The rise in sexual assault and harassment accusations extends far beyond just affecting women, and in fact, one in 71 men will become a victim of rape. While men as victims of sexual assault and sexual harassment hardly garner attention in the media, this statistic proves that the problem still persists. For men, this tragedy often provokes feelings of weakness, confusion, isolation, and anger. In a society that looks down on men’s emotions and encourages physical and emotional strength, young boys who become victims often develop depression and fears of relationships.

Despite the seemingly never ending accusations of sexual assault, the outpour of love and support for victims only continues to thrive. During Blasey Ford’s testimony, the National Sexual Assault’s Hotline spiked 147%—the most number of calls the hotline has ever received. 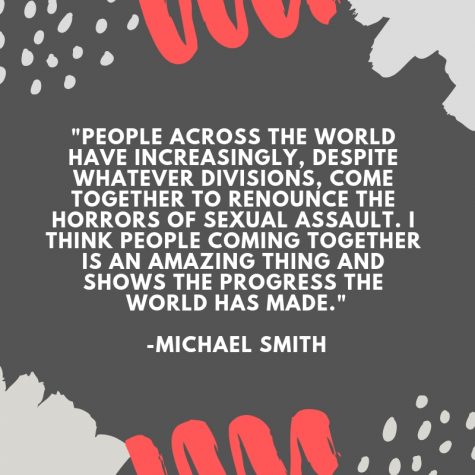 Pop culture icons such as Reese Witherspoon, Angelina Jolie, and Gwyneth Paltrow have all opened up about their experiences of sexual assault within the film and music industries. The explosion of the Harvey Weinstein allegations started a snowball effect, encouraging more and more women to come out of the dark about their experiences.

“I think society’s view of sexual assault is kind of biased, like what we saw with Kavanaugh and believing the man, but I think people are now believing the victims and there’s more equality instead of thinking the woman is lying,” junior Maddie Sullivan said.

While sexual assault becomes more widely recognized when it happens to pop culture figures or people in power, sexual assault still happens on college campuses in Georgia, the streets of Atlanta, and in one’s own neighborhood.

With the #MeToo movement currently at 1.4 million posts on Instagram, more than 1.7 million tweets on Twitter, and more than 12 million Facebook posts for the movement, victims find strength in numbers. The movement provides them with a community that not only understands, but also raises awareness for sexual assault and works to destigmatize the feelings around the event.

The discussion must continue to evolve, and it starts with people like you and me.

Turn on the news. Scroll through your Twitter feed. Swipe around a few accounts on Instagram. Everywhere we look, we see headlines and blurbs about the newest sex scandal of celebrities and politicians. But sexual assault happens in more than just Washington and Hollywood; it happens in our own backyards, and hardly anybody talks about it.