A send off to a Warrior: Remembering Dr. G 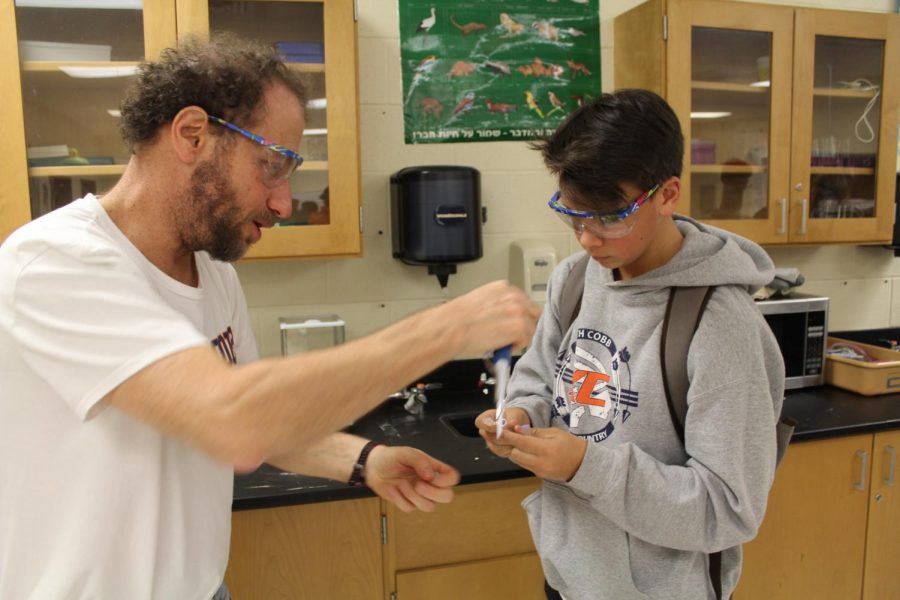 Doctor Gorlin aids a student in the analysis of DNA near the end of his second period biology class. Admired by many of his students (current and past) for his willingness and joy at helping his students in any way he can, Gorlin clearly puts as much time into his work as he can, admitting that to “I was pretty much here every morning from 6:30”, so as to finish as much work as possible.

As any member of NC can attest, we exist as something of a second family for each other when we eat, play, and even mourn together. When one first enters, we welcome him with open arms, and when one leaves, we pay our final tributes before their departure. Unfortunately, the latter will soon happen. One of our own science teachers, Doctor Alan Gorlin, will leave his job at NC, as well as his home in the larger Acworth-Kennesaw community on December 30 to leave for his true home in Israel.

Teaching is a profession wholly unique from all others. The role it plays in the development of future workers, for one, sets it apart, like teaching professionalism and an adherence to deadlines. The process of definitively knowing, much less following, a career path varies from person to person; this variation results from factors like salary, work benefits, and average hours spent working, with the decision to follow a path coming at the most spontaneous times. For Doctor Gorlin, the call of teaching came earlier than most and in a rather fitting context.

“Actually, I discovered [teaching] when I was in 10th grade, and I was asked to give a lesson on Mendelian genetics, because the teacher was not gonna be able to be there. There was a sub, and he called me in and said, ‘Why don’t you do something? Because I know that you could probably do a fun lesson, and the kids will learn something.’ Since then, that’s probably the main reason I wanted to go into biology, not necessarily teaching,” Gorlin said.

As mentioned above, the NC community serves as a family. When one says this phrase, however, they tend to say it in regard to students: students eat together, students mourn together, and so on. However, the teachers and general staff members operate as no less of a family than the students; for example, the English department holds monthly lunches where they build bonds with one another. NC’s teachers exist in an odd place between the two groups: they work as teachers but spend most of their time with students; in spite of this odd placing, Gorlin makes it very clear he values both groups.

“Probably the best thing [about NC] is really the coworkers. The teachers and staff here are amazing. But doing that over fifteen years, obviously you have to be motivated for it, and it’s just like one big family here; and the students here are also awesome. If I didn’t like the students who I’m with more than the staff, then obviously I wouldn’t last out all these years and enjoy [teaching],” Doctor Gorlin said.

Doctor Gorlin plans to leave America for Israel before the New Year begins. On the surface, this seems like him partaking in Aliyah, the tradition wherein Jewish people immigrate from the diaspora (Jews outside of Israel) to the Land of Israel; this claim does hold credence: Doctor Gorlin clearly holds his Jewish faith close to him, as any student can attest to. However, though this ritual may play a role in his decision to leave, another more personal reason plays just as large a role.

“I’m actually moving [to Israel] the 30th of this month, and my story goes way back. My parents moved when I was six years old, so I did most of my elementary, junior high, and high school there, and a little bit of post-high school. I have a daughter there and two grandchildren—one on the way. So it wasn’t easy to go back, but my main reason for wanting to go back of course is because I have family there, and of course religious significance. Being of the Jewish nation and the Jewish faith, I believe that that’s the land that God gave us, and it’s like a slap in the back if I don’t live there, at least for the last part of my life,” Doctor Gorlin said.

Those taught by Doctor Gorlin know him best for his extreme love for cats. He brings them up in conversations, they decorate the wallpaper on his computer, and they adorn the walls in his room; even one of his periodic tables features cats in the place of elemental abbreviations. Despite this, he never seems to say when, or even how, he first meet his cats, or any for that manner. From the outside looking in, one could (quite reasonably) determine the circumstances as positive; however, according to Doctor Gorlin, his first encounter with his own cat resulted in marked aversion, due to less than positive memories.

“My wife was an optometrist, [she] brought a cat home, and I basically said there’s no way I can have a cat in the house. When I was a kid—in Israel—there were a lot of homeless, feral cats. I was one boy out of three other sisters in the family, and my job was to throw the trash in the bins, and the cats used to scare me,” Gorlin said.

The departure of Doctor Gorlin will result in all of the school missing him; no other teacher possesses quite the balance of quirky charm and earnest goodness that he does. That kindness, that ability to touch the lives of his students and friends, left the most notable impact on not just past students of his class, but on Gorlin himself.

“[What I will miss the most from] North Cobb is the challenge of being with students who need a little more direction. It’s not just teaching biology, but I feel over the years, there have been more than a handful of students who really needed a little bit of a path in life, a little direction. Of course, I won’t be able to see the people I’ve been with on a day to day basis, so I’ll also miss them,” Gorlin said.

That does not at all mean that his impact extends only to himself; on the contrary, his students of years, past to this day, fondly reminisce the traits in him they most admire.

“I think what I’ll miss the most when Doctor Gorlin leaves is his authenticity; he’s just so genuine with his students and he’s really open about things happening in his life, like his cats. He’s volunteering after school, I really think it’s cool that you can connect with Doctor Gorlin. He also has life experiences that he [tells us] during class,” junior Adonia Rasmussen said.

Even more so than that sense of authenticity, they remember all the lessons imparted and wisdom Doctor Gorlin shared.

“He’s taught me that [by] working hard, you’re gonna see results. And even when a class feels like it’s impossible and so hard and like you can’t do it, he taught me that me that you just have to do your best, and that’ll push you as far as you can go, and you can really do anything that you want to do. He also taught me just to be kind to everybody because he was such a kind person and so inspiring,” sophomore Daniella King said.

What else should a teacher do but inspire their students, aid the disadvantaged, stand by their family, and honor their traditions?