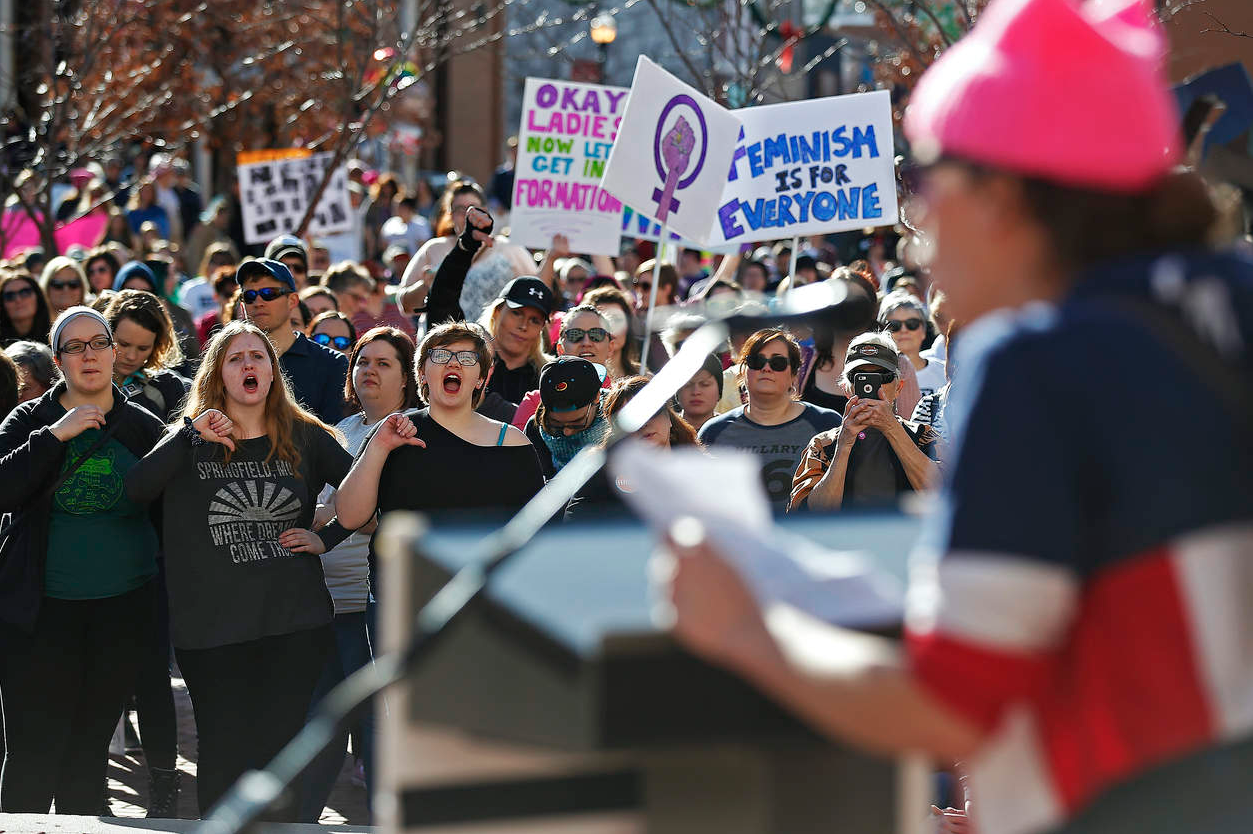 The Women’s March of 2017 sparked an unbelievable movement among millions of Feminist worldwide. A diverse collection of people gathered in popular cities and created signs to contradict President Donald Trump and his overtake in the American Government. Through this movement, people came together as one, protecting for equal human rights internationally and advocated for the concept of equality. This picture was taken in Springfield, Missouri. (Guillermo Hernandez Martinez/The Springfield News-Leader, via Associated Press)

The Women’s March of 2017 sparked an unbelievable movement among millions of Feminist worldwide. A diverse collection of people gathered in popular cities and created signs to contradict President Donald Trump and his overtake in the American Government. Through this movement, people came together as one, protecting for equal human rights internationally and advocated for the concept of equality. This picture was taken in Springfield, Missouri.

The misinterpretation of feminism

The topic of feminism constantly endures as a controversial subject. From its beginning in the late 19th century to today, feminism transformed into a stronger and more widely proclaimed movement. Through feminism’s reign in the media, various perspectives developed from the topic. Positive and negative points of view have arisen and altered the presentation of feminism to all demographics in our current society. Feminism takes over the media, the press, scholars, and our personal informal conversations. Feminism’s goal continues to work to achieve just that.

Feminism, by definition, is a political ideology of the advocacy of women’s right based on creating equality with their male counterparts, emphasis on equality. People often associate feminism with misandry, meaning the dislike or hatred of men or that women stand better than men in all aspects of life. In reality, feminism does not focus on the degradation of men, but works to heighten the status of women to equal that of men in society. Feminists act to support other women, help raise the status of women to equal men, and improve the  overall social, political, and professional platforms that women stand on. As different viewpoints have arisen, feminism evolved and diverged into different interpretations, and strayed away from its original message.

Male and female inequality lives in society than most people acknowledge it to exist; in instances such as the wage gap, which recalls 78-82% of the average male salary, or a woman’s socio-political status in society. The movement of women and men should possessing equal rights, opportunities, and treatment remains the goal since the beginning.

Brought to light by the familiar name of Susan B. Anthony, one of the first feminist movements, The National Woman Suffrage Association (NWSA), began its important work  in the year 1869. It’s initial goal persisted to increase the rights of American Women due of the disclusion of women in the 15th amendment. The 15th amendment grants African-American men the right to vote, while women of any race become left in the dark.  Women did not gain the right to vote until the 19th amendment that passed 50 years later.

Now, over a century and a half after the beginning of the movement, women still battle inequality. The unforgettable Women’s March in 2017 marked a worldwide protest on January 21st, 2017. Feminists gathered in Washington D.C to stand for human rights, and most rallies occured after president Donald Trump’s inauguration. True feminists subsist closer than someone might think, and come in all different shapes and sizes. Lindsey Theaker, an English Teacher for AP English Language and Honors American Literature at NC, considers herself a strong feminist and believes in the equality between men and women. She observes how feminism changed during her lifetime and how the original meaning strayed.

Theaker grew up with a strong mom who always encouraged her to speak up for  the right or wrong, and to be treated the same as anybody else. She never received the accurate definition of feminism until college, because adults never mentioned it in school, ironically, North Cobb. In college when she engaged in Women Studies courses, she learned about the simplicity of the definition, and quickly knew that she believed in the ideology. Now taking over a teacher’s role, instead of a student, Theaker tries to provide equal opportunities for all of her students to speak their own truth with their knowledge of what feminism actually stands for and express their beliefs of equality.

“I teach a lot of students who would consider themselves proud feminists, and I’ve have noticed, considering I teach English which is female dominated in terms of teachers, we only have 2 current male teachers in the English Department, and I often see girls being pushed into the English field, like ‘Oh you’re so good at writing’ or quiet aspects, when in fact I think it’s so important that women’s voices are heard in the things they write, so I have definitely noticed girls taking reign sometimes and maybe this is kind of stereotyping but I think sometimes girls tend to do better in English classes and I don’t know why that’s the case,” Theaker said.

It holds importance to remember what feminism really means, by definition alone, without individual interpretation. NC junior Jordan Ross, recognizes herself as an active feminist. She participates in frequent marches and protests and speaks out about her experiences and beliefs.

“I think through social media, [feminism has] gotten more of a negative connotation, but I wish people would take the time and realize that all it really means is equal rights…the way media portrays feminism really depends, now we get to see more girl power type of scenarios, and there are way more female leaders now, which is awesome, but then again where there’s that positivity, people can say whatever they want and can hate,” Ross said.

She publically shares her experience freely amongst peers, sharing posts on her personal social media. She believes that helping students at NC understand the true goal of feminism and strives to bring attention to its relevance and influence as it relates to our future society, and students lead the future.

“To improve understanding, educating [students] about the term instead of it being blown out of proportion as it could be. I wish people would understand that it’s not a bad thing to call yourself a feminist, whether you’re a boy or a girl, or whatever you want to be in your life because in the end it’s just equal rights,” Ross said.

Students in the community, all carry different perceptions based on their personal backgrounds, and morals. Based on families, friends, the media, and education students possess the ability to create their own views, providing the chance to steer their own lives. Based off of 100 students at NC, 66% female and 34% male, 45% voted feminism to be positive, 18% negative, and 34.2% neutral, with 2.6% saying that it depends. The issue of sexism does not exist prominently in the halls of NC, but it becomes most obvious in the real world. 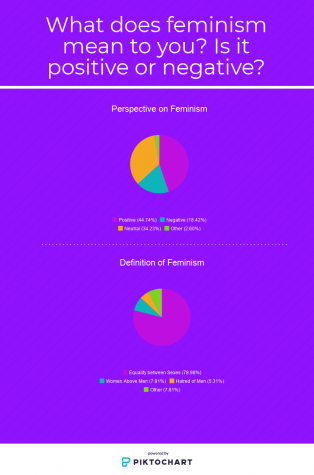 “Honestly my whole life, I thought feminism meant that women are superior to men, so I’ve had views against it. I think people interpret Feminism is a really negative way unless you truly know what it means. For me personally, I’ve always thought it was negative and annoying because I’ve always thought it was like, ‘Women are so much better than men,’ but i mean honestly, I’ve had friends that have helped me recognize what it is because I think were not educated enough about it to make opinions on it,” sophomore Daniella King said.

Through diverse countries, traditions and cultures, the need for feminism and a push for women’s equality strives. The US ranks as the twenty-second country out of 153, according to GIWPS, that regards women’s equality. As students grow through high school, they become more exposed to international injustices and social issues.

“I feel like in our society, it’s ballooned to something that isn’t needed as much. There are other countries that have it a lot worse, but also at the same time, there are still issues that women are still discriminated against in certain areas, and how they’re not looked at the same.  It goes with comparing how big is it of an issue in America, vs. other places. I feel like the modern feminist movement doesn’t look at the rights of women in other areas, such as Saudi Arabia, but looks more at minor inconveniences and has the tendency to blow some things out of proportion,” senior Steven Robinson said.

Students who carry this more negative perspective do not consider modern feminism toxic but unnecessary and over exaggerated.

“I think the media likes to get stories and views and they will put things out there that may not necessarily be issues, to make them issues, which intern, changes the way people think…It doesn’t look at things such as, what jobs are being taken by what people, and what jobs are dominated by men and what jobs are dominated by women, and how it is men that are most likely to be in those bigger jobs, and how women get there, but at the same time, the media doesn’t acknowledge that. The media just goes straight for the story and straight for. ‘Oh women don’t get paid as much.’ People want to be victimized, in my opinion,” Robinson said.

Advocacy takes place closer to you then you might think too. Atlanta participated in the Women’s March 2017. Thousands on feminists gathered in downtown Atlanta to represent their strong stance. It billed as a peaceful demonstration of omens social issues in Georgia, and members of communities throughout the state stood together recognizing strength and diversity. Everyone presented themselves aiming at the same goal, women’s rights equal human rights.

Once again, feminism defines the advocacy of women’s rights on the basis of equality. Feminism motivates women in society to expand onto the traditional roles, becoming leaders along side men. Anyone could believe in feminism, if someone simply believes in equality. Recognizing feminism’s positive interpretation and its true influence that women mean more than just a homemaker and working higher jobs remains important. Younger generations now, acknowledging the importance and passing around the correct meaning to unite all different kinds of people continues show value. The goal of feminism always and will always continue as equality, and our society can only grow better from here.