Self love vs. egoism 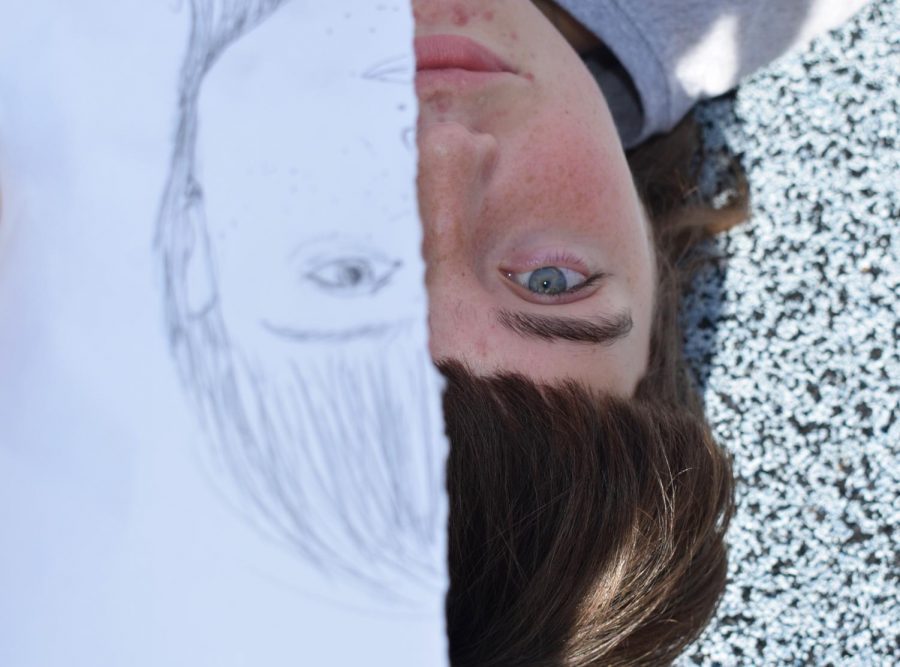 Self-perception exists as an important factor in self-love, and an abundant amount of people create mental misconceptions of their appearance. “When you draw realistically, you are forced to draw exactly what you see, so with self portraits, your self-perception is irrelevant. It is a helpful activity for those who have misconceptions or exaggerated perceptions about their face or body,” junior Isabella Markham said. Markham holds a realistic drawing she made of herself over one half of her face to demonstrate the realism.

When one thinks of possessing ego, certain traits come to mind such as self-obsession, vanity, haughtiness. When an individual gives the label “egotistical”, it paints the picture of someone who thinks only of themselves, who views themselves as better or more important than others. Some egotistical figures in today’s society who might pop to mind include current President of the United States (POTUS), Donald Trump or rap celebrity, Kanye West.
Now take “self-love”: hard to define and even harder to grasp. Regard for one’s own happiness and gain defines the concept in a simple way. Self-love previously held a much more negative connotation than it does now. People viewed it, especially for women, purely as vanity. However, through centuries of protests, the Hippie age, and feminist movements, the concept of self-love became normalized and celebrated. Public figures advocate for it, and social media accounts are dedicated to it. Such a positive movement caught on quickly, but nevertheless, gained opposition alongside support. Those who feel as if self-love should not be celebrated or vocalized draw parallels between it and ego.

At the rate that individuals reject compliments and participate in self-degradation, one might assume self-hate and deprecation is glamorized. A person proclaiming themself as attractive implies ego and meets skepticism whereas someone calling oneself ugly comes off as relatable and even humble. More protest occurs when a person declares their physical insecurities than agreement and support when one celebrates their own beauty. Why does society feel less inclined to acknowledge a person’s attractiveness if the person themself has done so?

Of the many unattractive traits that exist, ego certainly fits among them. Excessive self gratification and obsession does not make one’s heart skip a beat. How does one identify the line between self love and ego? How does one celebrate their beauty without coming off as self-absorbed? Is it right for celebrating oneself to receive shame from society? Why do some individuals tiptoe and apologize for their confidence and security? Simply put, people learn to. Today’s society teaches us to compare and degrade ourselves and therefore, others.

Recognizing this issue among many others in society, Haley Kilpatrick, a young woman from Albany, Georgia, founded an organization called Girl Talk, Inc in 2002. She established the first chapter in her hometown. Kilpatrick gained inspiration for the organization through her want to aid her younger sister in her middle school years. Providing a safe space for girls to discuss any and all issues they encounter encapsulates the goal of Girl Talk. Soon after its birth, Girl Talk popped up in other places around Georgia and worldwide in the form of school clubs or community organizations. North Cobb housed its very own Girl Talk club in the 2017-2018 year for girls from every grade level. Young women discussed a variety of topics, from heavy subjects like body image to their favorite music. The goal: to create a comfortable, open, and understanding environment.

“In middle school, we had a Girl Talk and it was run by our principal. The whole idea behind it was to bring females together in a positive environment. A lot of people assume that when girls get together they just gossip and that was disheartening for me to hear. I decided to bring [the club] to high school and mature it a bit. In the NC Girl Talk, we would discuss topics that dealt with personal and situational issues. We focused a lot on social issues, for example sexism, and how we could be strong leaders for other girls. [Body image and self-love] was a big topic for us. Especially in high school, a lot of teenage girls go through different changes and hardships and if they don’t have the right support or they don’t talk about it, it’s detrimental,” Magnet junior and founder of the Girl Talk club at NC, Livia Epnett said.

Culturally, especially in America, people build on failure and dissatisfaction. However, destroying body image and physical confidence marks the point where the hate halts being productive and begins to inhibit one’s ability to grow into a happier person.

Junior, Isabella Markham recounts a long history with self-love, and a slow and gradual journey to self-acceptance. She recognizes a society that breeds self-dissatisfaction, and experienced it herself.

“I remember in second grade I would look at other girls and I was taller than them and I thought, ‘no boy is going to like me, I’m tall’ and that translated into weight for me as I got older. In fifth grade I would go on these diets with my mom because my mom was always trying to lose weight, which is a normal thing in society, and it shouldn’t be, that ‘smaller is better’,” Markham said.

Markham demonstrates a patience and unbound comfortability with herself that captures the essence of self-love. On the surface level, hard to see her as anyone else, it surprises some to know she fought her own battles, as an abundance of people have done and continue to do. In her sophomore year of high school, Markham began a gradual obsession with body image and food. She chose to harshly regulate her eating habits in order to achieve a standard of beauty that is constantly encouraged by others and in the media.

“… I felt really lost. I felt like the only thing I could control was myself and how I looked. I started to not eat,” Markham said.

A combination of external factors and introspection led her to self-acceptance. A journey littered with obstacles and internal struggles, but well worth it.

“I started following a bunch of body positivity accounts on Instagram and they help so much. When I’m having a bad day I just go online and I see all these people with all different bodies who are saying ‘yes this is who I am and society can’t tell me otherwise’,” Markham said.

Body positivity accounts on social media continue to gain more and more traction as self-love becomes increasingly celebrated in society. Accounts like @bodyposipanda and @effyourbeautystandards on Instagram share their own and others’ stories of self-acceptance and happiness in their own skin.

“Growing up in society, [girls are] always taught to be bashful. It’s sweet and cute to say ‘Oh no, I’m not beautiful’ but the baseline of that reaction is to get someone to say ‘No, you are beautiful’. It’s to get that recognition and validation that they long for because they do not see it in themselves,” Markham said.

Misconstrued and distorted, the concept of self-love receives a twisted definition. Those who vocally participate in self-love often find themselves unfairly accused of egotism and cockiness due to odd societal norms. At any age, in any body, people struggle to fully accept and love themselves. Achieving self-satisfaction takes patience, willfulness and acceptance at all stages. For each, the journey presents itself differently. For all, it remains ongoing. Complete satisfaction exists evasively. Insecurities breed unhappiness and jealousy and push people into a never ending cycle. To step out of it, one needs not to learn how to make a concrete distinction between self-love and ego. It simply should not matter. One must only remain comfortable with themselves, accept themselves, and allow others to live as they may.

“[Self-love is] acceptance. It’s not always the glamorous, ‘I look in the mirror and I love myself every single day’, it’s the fact that I can accept myself as I am, no matter where I’m at,” Markham said. 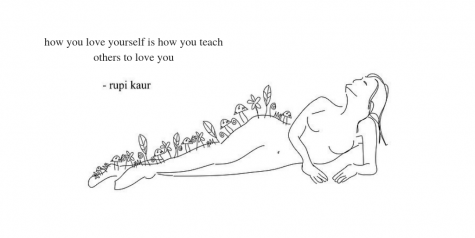