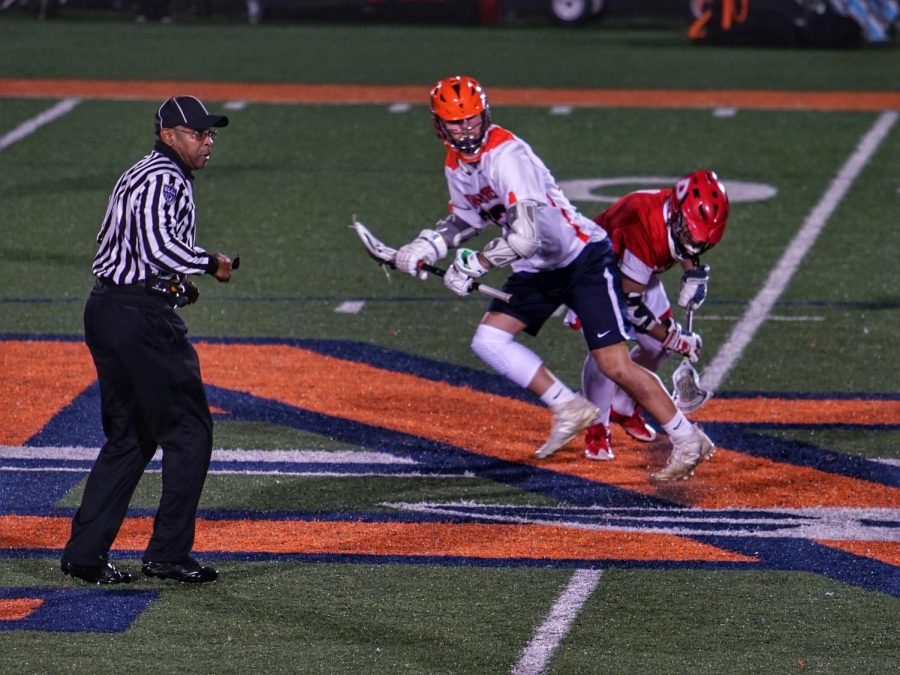 Noah McKouen, faceoff midfielder, wins faceoff at NC. “It's a lot of hard work playing college sports, but I know he has the determination and focus for what is to come! I hope he stays healthy and strong, but mostly, I hope he is happy,” Sara McKouen said.

As college approaches quickly for seniors, student athletes begin to focus on the next step in their athletic careers. Senior Noah McKouen recently decided on the next step for his lacrosse path. After five years of playing lacrosse when he signed to Palm Beach Atlantic University on December 19.

McKouen’s love for sports developed early in life, starting with football as a toddler. He ventured into lacrosse in 8th grade playing on a junior team and immediately fell in love with the sport as well as the core values, such as determination, it taught him. McKouen also plays on a summer team for Fellowship of Christian Athletes (FCA), which showed him discipline in all aspects of life.

“My summer team lacrosse coach is probably who helped the most throughout my lacrosse career since he showed me core values. He taught me how to work hard,” McKouen said.

McKouen received an offer and a partial scholarship from Palm Beach Atlantic University, his first choice school. He believes this college will fit him best as he pursues a further education and lacrosse. McKouen considers this signing event his biggest achievement in high school.

“I knew after his freshman year he could go as far as he wanted to go with lacrosse.  He has the work ethic in the classroom and on the field to be successful,” NC head lacrosse coach John Almy said.

Throughout his journey, influential adults have helped him succeed. He holds a close relationship with his family and considers them his biggest support system.

“Noah’s impact on our family is hard to sum up in a few sentences. He has a close relationship with both his older sister and his younger brother. He keeps everything lighthearted and playful with his easy going personality. He’s very helpful at home and on the field. We love him a lot,” mother Sara Mckouen said.

Almy praises him for picking up the rules and skills of the game so quickly. The coach envisions Mckouen at Palm Beach Atlantic as a four-year starter in his position: faceoff-midfielder.

Mckouen expressed excitement to see what his future will look like after college. He hopes that his final year playing lacrosse in high school will end as a successful one.

“If I could tell underclassmen playing lacrosse anything, it would be to keep working hard. Your time on the field will come, so do not give up on it,” Mckouen said.