How to Get Away With Murder slays competition on Thursday nights 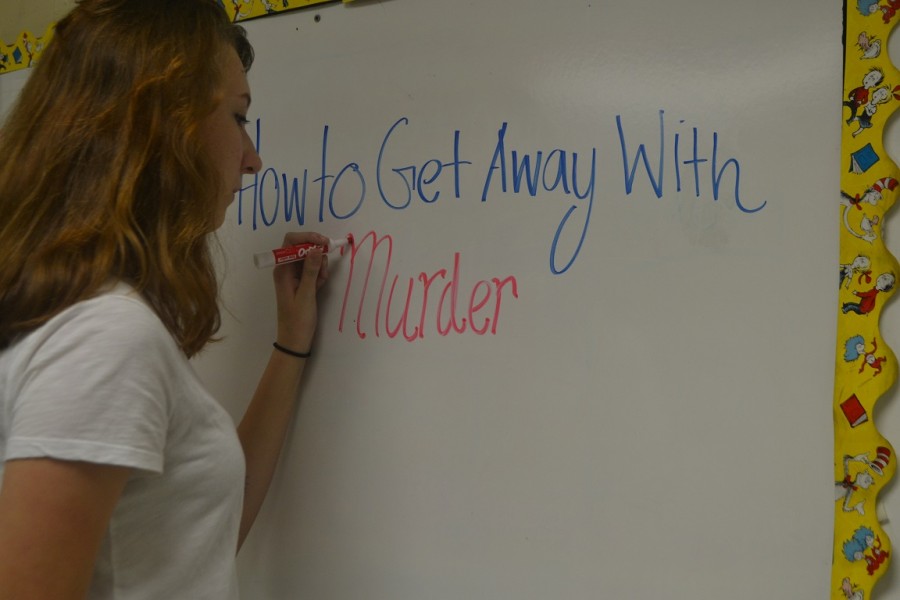 Junior Alex O'Brien channels her inner Viola Davis by flourishing the title on the board, similar to Davis' signature move in the pilot, aired September 25.

The new legal mystery drama from Shonda Rhimes, How to Get Away With Murder, offers a spectacular blend of intrigue and action.

To kick off the first season, main character Wes Gibbons (played by Harry Potter alum Alfie Enoch) heads to his first day of criminal defense class. When he enters the class he has no idea what to expect and seems nervous about being the new kid. As the class begins, he meets his professor, who is the furthest thing from ordinary. Dr. Annalise Keating (Viola Davis) teaches a law class and prefers to call it “How to Get Away With Murder.” Through real-life trials and a strict teaching style, Mrs. Keating educates her students about the tough world of defending accused murderers.

The pilot episode became an instant hit with viewers and captured the audience’s attention with its well-developed, interesting characters and a thrilling plot with mysterious twists. The characters that appeared in the first episode were well drawn out and flashed interesting personalities that made them all unique.

Each of the personalities displayed created a well-rounded base for character development later on in the season and contained a wide array of diversity that modern audiences crave. These characters are supported by a plot that offers subject matter such as, murder, courtroom debates, and emotional tension. A suspenseful script gave the show a flair and enchanted the viewers with its exciting take on traditional mystery shows.

In addition to the entertaining plot and the highly developed characters, How to Get Away With Murder gives viewers strong female leads that refuse to let anybody get in their ways. These strong women seem destined to add a powerful flair to the show and add variety to a male dominated media. These strong female leads are played by talented actresses who hold up the role of an independent woman with excellency.

The success of the show could hinge on the performance of the aforementioned Davis, who portrays the role of an empowering yet strict teacher who does whatever it takes to win a case. She embodies the role and demonstrates superb acting skills that give the show the extra push it needs to stick on the television landscape.

The Chant’s grade: A-