From childhood books to NC stage: Junie B. Jones 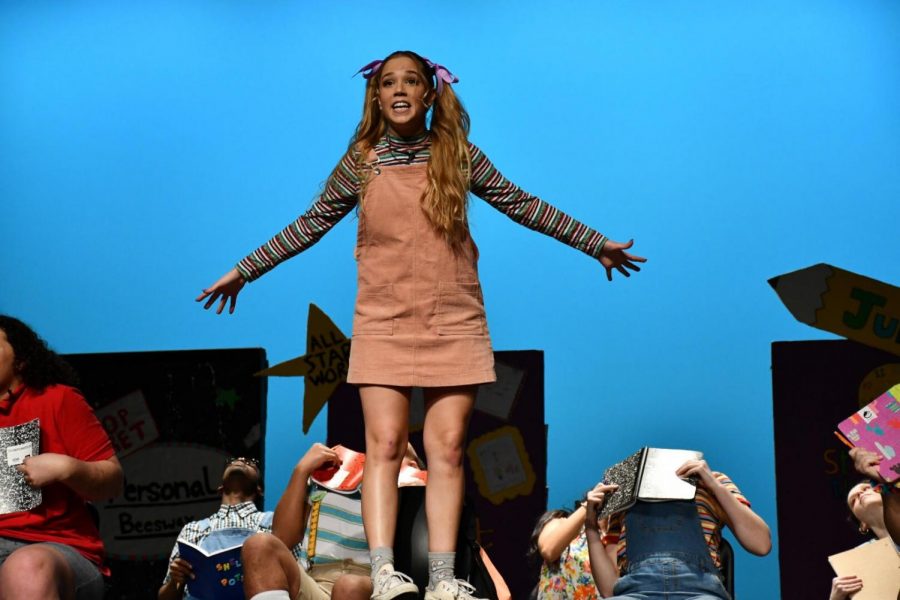 Senior Isabella Keaton, who played Junie B. Jones, breaks out into song over her distress about her inability to read words correctly. Performers spent dozens of hours rehearsing the dance moves for the song to have it perfect by opening night.

The NC theatre program proudly presented Junie B. Jones, The Musical, a witty and captivating performance to a small, yet eager, audience on opening night, Thursday, January 24. Although typical for an opening night performance, some newer thespians felt slightly discouraged.

“Opening night was the smallest audience of the five shows we performed, and that was a little discouraging to our newbies. Every show comes with new actors and actresses, especially musicals. That means many nervous ‘first graders’ in need of many pep talks before the show,” junior Evyna Milligan, who also played Lucille, said.

NC’s theatre kids created a convincing first-grade class, pulling off their youthful facade with colorful outfits, high pitched voices, and some pigtails here and there. Senior Isabella Keaton played the dynamic star of the show, Junie B. Jones herself. Keaton captivated as she pranced around the stage, dragging her diary, called the Top-Secret Personal Beeswax Journal, with her nearly everywhere she went.

“Being Junie B. was definitely the best part of my senior year so far just because, as the lead role, I got to take a lot of initiative in the musical. I really tried to step up and be a good example for all the newbies and motivate everyone to perform their very best. I loved every second of it, and I couldn’t have done it without the amazing cast and crew that was with me,” Keaton said.

Junie B. Jones, The Musical, co-written by Marcy Heisler and Zina Goldrich, gained inspiration from the children’s books series written by Barbara Park. The first book of Park’s series, titled Junie B. Jones and the Smelly Bus, follows a displeased Junie B. through her first day of kindergarten. The following books detail similar kindergarten experiences.

Junie B. Jones, The Musical began on Junie’s first day of first grade. The exuberant girl appeared nervous but expressed obvious excitement once she laid eyes on her kindergarten best friend, Lucille, played by Milligan. However, Lucille rejected Junie’s offer to remain best friends and the shot-down first grader quickly realized that this new school year may prove quite different than her last. Jones narrated her hardships and adventures throughout the musical in her Top-Secret Personal Beeswax Journal, singing and dancing with her peers, teachers, and parents.

“I feel this cast did an amazing job during performances. In the past, we’ve had people miss lines due to nerves, forgotten words in their own solo, or even completely miss cues to come onstage. With this show, the timing in cues, lines, and songs were exact. The only thing I would correct is the poor stage business. If we don’t speak or sing in a scene, we tend to doze off into our own thoughts and forget we’re onstage. Nothing a slap on the hand can’t easily fix,” Milligan said.

Audience members found the theatre program’s winter musical refreshing and adorable and look forward to the theater program’s upcoming performance of Shrek, which they will perform later this year.