Singing in the choir of capability: NC’s resident celeb 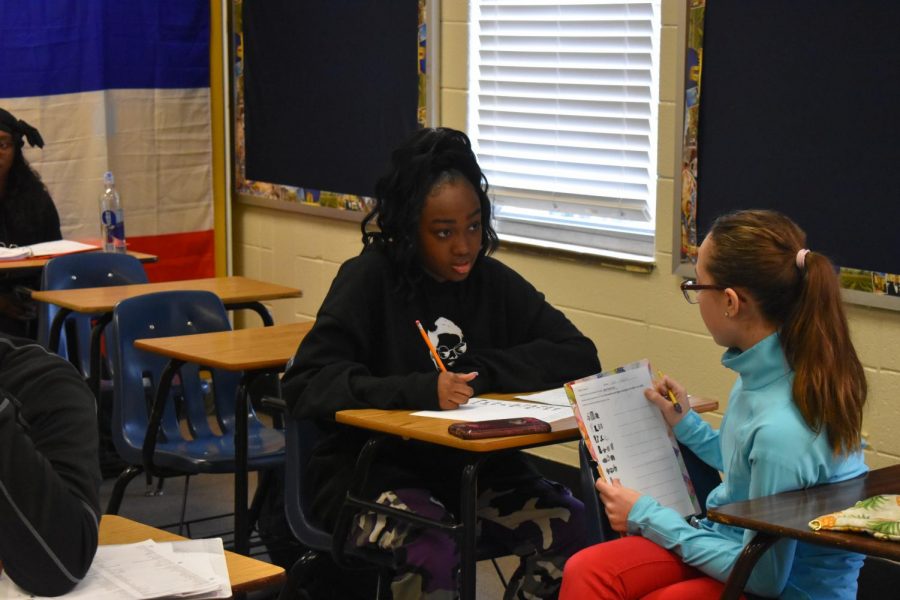 Anaya Cheyenne participates in an activity for Ms. Cotton’s 3rd period Spanish class. Despite living the life of a singer, Davis still must meet all the requirements demanded of a NC sophomore. When prompted on how she balances school with work, she noted the exceedingly demanding schedule she follows, though she still manages to keep up.

The culture of America places heavy emphasis on various concepts: the dynamics of the nuclear family, education of the youth, the advancement of technology, and more. Among these notions, the heavy emphasis on celebrities managed to permeate American culture since the days of flappers in the 1920s. In the 80 years since then, young and old alike would examine each and every source of information on their favorite celebrities: paparazzi photos, tabloid magazines, social media posts, and more. In select cases, the famous find themselves deified, immortalized with shrines in their honor.

This trend, however, applied mostly to major celebrities: Marilyn Monroe’s and Michael Jackson’s. From the 20s onward, these people found themselves harassed (and indirectly killed) by paparazzi and influenced the creation of fan clubs in their honor. After the advent of the Internet and video sharing sites in the mid-2000s, however, this all changed. Beyond the possibility of one becoming a sensation overnight, hidden talents of someone who would otherwise remain an ordinary citizen can now find themselves the source of one’s admiration.

Such a case applies for NC sophomore Anaya Davis. In addition to living the life of a high schooler, Davis operates as a professional singer, dancer, and actress, performing under the name Anaya Cheyenne. Like the majority of those around her age, Davis possessed a special talent that she wanted to share with the world; unlike most others, however, something came of her efforts.

“I’ve been singing ever since I came out the womb. I didn’t really professionally start working on my craft until the age of twelve, and that’s just when things really started to blow up on Youtube, Instagram, and other social media platforms,” Davis said.

Considering Davis’ success, as well as her young age, one could reasonably assume that her success predominantly came exclusively as a result of her achievements. In all fairness, a grain of truth exists in that statement: her ability and talent put her on the map, her image gained such a strong social media following, and her work ethic allowed her continued success; despite that, Davis did come across aid in her career, namely a family member who continues to motivate Anaya to improve herself.

“Personal influences on my life [would include] my [older] sister, Sierra Wilson. She started working on her craft before me: she’s an actor and a singer. She has been on Tyler Perry’s Meet the Browns; she played Simone on the show. She’s just been a huge inspiration to me. She was actually on one of the billboards on a highway, and I was just like, ‘Wow,  that’s crazy. I want to be on a billboard one day like my sister,” Davis said.

Management forms a vital portion of success in the entertainment industry. Commonly confused as an agent, the two professions work rather differently, in spite of their similarities. While an agent seeks out talented performers to audition for roles, managers work far more personally with actors. Managers, as the name implies, serve to manage the careers of an actor; this entails signing actors to contracts, ensuring said contracts do not harm the careers of their clients, and generally provide counsel to an actor. Taking all this information into consideration, managers must stay objective when considering the careers for their dependent. In Davis’s case, her primary manager operates within a close familial position; while one would think this would harm her career via association bias, quite the opposite occurs with Davis.

“My manager is my godmother, so I definitely got a huge opportunity to just jump right on in; she manages me, it’s very professional. Just to be with a team of people that really supports you and has your back and know what they’re doing through the process is an important factor. If you’re with a bunch of people that don’t know what they’re doing, you could really get yourself into a lot of trouble. Surround yourself with positive people who won’t dim your light,” Davis said.

While it may slip the minds of her friends, fans, and family, Anaya Cheyenne still attends high school, and as such must do all the work that being a student demands. She does more than just work as a student, but the work on top of her normal schedule as a singer. A fair share of students know and struggle with balancing school and work; when prompted on the specifics of her job, though, Davis’ schedule makes the plights of the average student sound tame by comparison.

“Well, I’m obviously in public school, so I’m still working a regular public school schedule. I basically wake up early in the morning and go to school. After that, I would have rehearsal from 5:00 to 8:00, and after that, I would go to the studio and be up until 12:00 in the morning, sometimes later than that. And then [I] have to restart over and over again,” Anaya said.

Though it may come off as a shock, showbiz lacks the “livin’ easy” facade popular culture gives it. This can manifest in fairly obvious forms: performance in a disliked movie or show could tank a career, low album sales may instill doubt and reluctance in record labels to renew contracts, and injuries sustained on the job may prevent one from ever working again. Besides that, more subtle ways exist wherein the industry can negatively impact performers, especially the young: pampering can arise from hyper-protective parents, links between drug abuse and child acting do exist, and the potential of falling into obscurity exists for both the veterans and rookies in the industry. The personal struggle for Anaya arises from a more personal source, though she still manages to overcome and manage it daily.

“The biggest struggle I’ve faced is myself. At the end of the day, no one can stop me but me, and being in this industry, it’s a whole lot of negative people saying negative things to bring you down; A lot of people try to harm you so they can get to the top, it’s a lot of that in the [music] industry. I know at the end of the day, the only person that can stop me is me,” Anaya said.

Despite that fear, Davis still manages to rise to the occasion in every circumstance: her YouTube channel continues to grow with each passing day, and just recently reached 79,000 subscribers. In addition to that, Cheyenne received larger recognition within the school when Tomahawk Today featured her, as well as national recognition after signing a deal with Radio Disney. The future seems extremely bright for NC’s resident celebrity.