A recipe for intrigue: past and present diffusion of Culinary recipes at NC 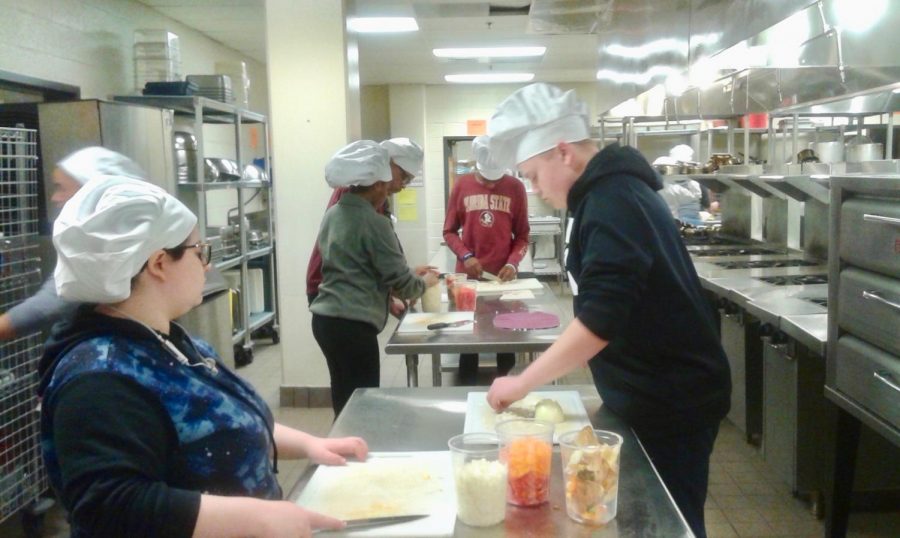 The Intro to Culinary Arts (ICA) students practice their knife skills by chopping onions, garlic, bell peppers, and an assortment of other vegetables. This activity, as well as the others like it, serves two purposes for the Culinary students. The first purpose seems fairly straightforward: creating food for the students to eat and share with their classmates. The second purpose, while less obvious, deals with teaching the student chefs how to perform specific culinary skills using the designated food product to practice.

From computer science and engineering to the basic principles of marketing entertainment, NC plays host to a diverse array of career tech electives. Despite the education diversity provided among these courses, one of the most central would include the culinary pathway. This specific set of classes aims to teach students about the culinary process beyond basic cooking, from maintaining a safe environment and proper cooking garb, to the steps needed to properly measure ingredients.

For the most part, the Culinary department tends to keep their work and the content somewhat obscure from the rest of the school, for reasons to expand upon later. In spite of that, a time existed where that rule seemed like an exception. As seen in a 1998 issue of The Chant, a section within the paper titled “Cooking with Colter” featured a recipe from the culinary class.

While a rather short part of the 1998 issue (taking up a cutline-sized portion at the top), there does exist information to glean from it. To start, the recipe section begins with a paragraph long description where Colter introduces the recipe and tells readers why they should bake the cake; including the recipe’s relatively short cooking time of 45 minutes and simple instructions. 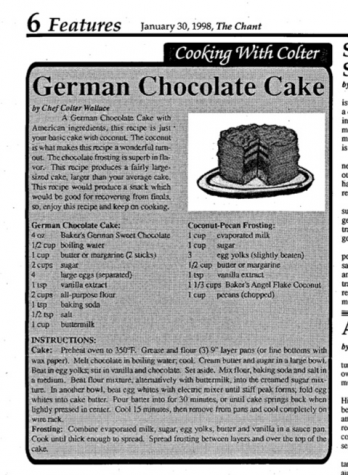 Ashu Ebot-TabiDated January 30th of 1998, this issue of The Chant features a brief section devoted to 1998 student chef Colter Wallace sharing one of the Culinary classes’ recipes with the school, in this case a German Chocolate Cake with coconut frosting. While taking up a comparatively minuscule portion of the actual issue itself, the section does at least give readers a good idea of how to bake this desert; the charming introductory paragraph helps as well.

Regarding the recipe itself, it looks more or less like how one would expect: a basic list the needed ingredients with the required measurements, divided between the cake itself and the frosting—hardly an unconventional structure. The same sentiment applies basically verbatim for the recipe portion—two separate paragraphs for the cake and frosting, outlining the instructions in sequential order. All things considered, a fairly standard recipe.

One question that may come to mind asks, ‘Why did the Culinary department choose to share this recipe back then?’ when no real benefit came from doing so. To that question, possible answers do exist—perhaps the Culinary kids liked the recipe enough to want to share it with the whole school, or maybe they always shared recipes back then for altruistic reasons (an unlikely reason, considering no issue dated prior to the 1998 one supports that claim). Off all the possible reasons for sharing recipes, the simplest could simply involve wanting more 1998 kids to join Culinary, which would make sense: If students make the cake and enjoy it, they may want to learn other recipes to cook. Despite this, a current NC Culinary teacher, Coach Humphreys, feels that sentiment may not do much to boost student chefs.

“I’m not sure that [sharing recipes with students] would create much interest because I feel like if someone is interested in cooking, they might have already gotten themselves enrolled in or already taken the Culinary class. Other then that, they probably would just cook with what they’ve learned at home. Basically, if you’re interested in Culinary, you’d be in the class, if not, you’re not,” Intro to Culinary Arts teacher Kelley Humphreys said.

As mentioned above, the Culinary department tends to not share their recipes from class with the rest of the school; this decision exists as less of an official policy and more of an unspoken norm. The reclusive nature of the class goes beyond simply not disclosing recipes with the rest of the school: students not in a culinary class cannot enter the kitchen unless for an official purpose (bringing an item to a teacher or delivering a pass from administration). As dubious as this may seem, though, the department’s choice to not share recipes comes not from a place of malice; quite the opposite, in fact, as the Culinary department and its teachers do share their recipes with others on occasion.

“After we provide a meal, a lot of people or teachers will follow up with an e-mail saying that they really enjoyed something, and I try to get back to them as quickly as possible and get them the recipes they wanted. At the end of last semester, we put together a cookbook with some of the major recipes from the entire school year. I would like to do it again; we definitely found some modifications that we’d like to make in the process. It was a great way of sharing all of our recipes and encouraging teachers to cook as well,” Department Head Chelsea Hughey said.

By looking at this cookbook for teachers, one can see the effort put into sharing the culinary program’s recipes with others when they choose to do so, as well as the differences between this one and Colter’s from 1998. Looking at the formatting, the 2018 cookbook (with its recipes located in a sturdy binder) seems more practical for domestic cooking than the rather miniscule blurb from the 1998 Chant article. Further aiding the newer cookbook in terms of practicality, it begins with a table of contents which puts the 64 recipes into 15 categories.

As for the recipes themselves in the newer cookbook, its basic structure closely resembles that of Chef Colter’s. Both provide hopeful chefs with brief instructions on how to prepare meals and the exact portions of its ingredients. Despite their similarity on a surface level, though, the two texts simply give off different vibes. The recipe with “Cooking with Colter” comes off as more amiable, likely because of the short but charming introductory paragraph suggesting the cake as a good way to “recover from finals.” On the other hand, the more recent culinary cookbook, while straightforward with directions, does so in a way one could reasonably see as gruff and overly abrupt.

“The biggest hurdle in sharing recipes is when I choose these recipes, they’re for a specific lesson. If a teacher doesn’t know how to do maybe a specific skill, their recipes at home might not turn out quite like ours because they don’t have the context of being taught something in the process. When I do recipes [in Culinary class] I give students specific instruction, and I can’t do that in a [normal] recipe; some teachers might have a few fails at home using some of our recipes just because I’ve not been able to give them those specific instructions,” Hughey said.

While a lack of teaching may hinder one’s ability to cook a recipe from the Culinary class, there does exist some merit to sharing recipes: namely, helping spread diversity among the school through food.

“I think that it’s fun to share different recipes, especially if they not only just come from class, but if they come from home; that way, you can have that mixture of cultures or share a recipe that has a lot of meaning to you. It’s really fun to receive different recipes, you get a new variety of foods you can cook,” student chef and junior Taylor Catlin said.