The case for Linux: Why America should stop worrying and learn to love the penguin 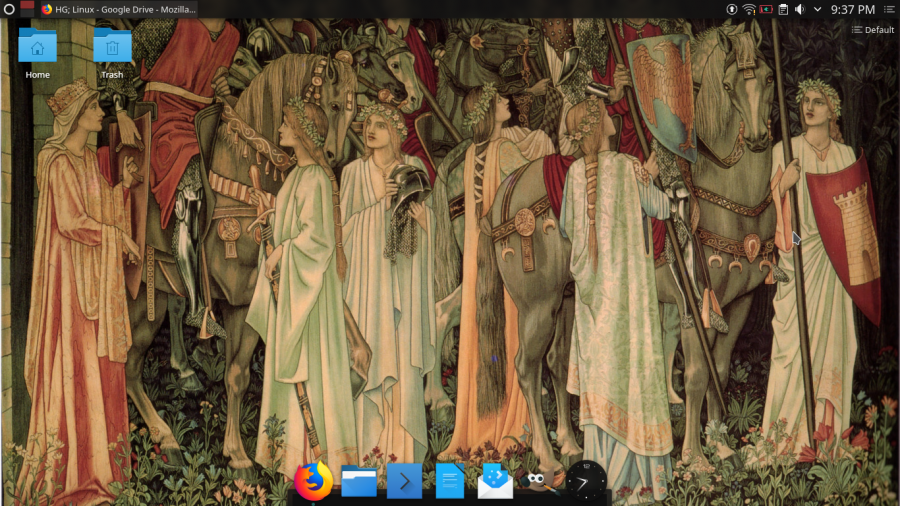 The author’s computer runs a fairly recent installation of openSUSE Leap 15.0. The heavily customized KDE Plasma desktop features a famed work of Victorian art, the Holy Grail tapestries, framed by a dark, translucent panel placed at the top of the screen and a Mac-esque dock at the bottom. These alterations, when contrasted with the rather different default settings, serve to prove that even the greenest of Linux novices can easily modify his or her operating system to fit his or her tastes and needs.

In a notorious series of Apple commercials that ran for the latter part of the last decade, a strapping young fellow in fashionable clothing announces, “I’m a Mac,” while a stodgy, physically unimpressive man in poorly fitted business attire proclaims, “I’m a PC.” The ensuing conversation stresses the alleged advantages of Apple’s Macintosh computer over other PCs, presumably running Microsoft Windows. The advertisements’ central premise somewhat misleads the viewer: experts classify both Macs and most commercially available Windows boxes as personal computers, or PCs, and the commercials frequently conflate the physical computer with the operating system (Mac OS or Windows) running atop it. Perhaps most egregiously, though, Apple neglects to mention that the discerning PC user need not use either Windows or Mac OS. Another operating system exists, one easily installable and usable for users with any measure of basic computer experience, one free from the malign influence of such corporate behemoths as Apple and Microsoft: an operating system called Linux.

In 1991, a Finnish university student named Linus Torvalds, thoroughly fed up with the arbitrary and labyrinthine license requirements then attached to most operating systems, decided to draw on his computer expertise and write his own program. A colleague released it onto the Internet, calling it “Linux” as a portmanteau of the name of its creator and that of the operating system on which Torvalds had modeled it, UNIX. Since Linux operated under an open-source license, allowing any programmer anywhere in the world to contribute to the code rather than restrict development rights to one person or corporation, enthusiasts worldwide soon began to improve and refine Torvalds’s creation, and within a few years, both hardware vendors and high-end customers such as NASA took the first steps toward widespread adoption. By the end of the 1990s, Linux boasted increasing recognition in both the server room and the family room, at least three Linux-based tech businesses (Red Hat, VA Linux, and SuSE), and even its own mascot, a cartoon penguin named Tux.

Opponents have long dismissed Linux as an overly complicated hobby for obsessive tech aficionados. Today, though, Linux offers an experience to match, or even outstrip, more popular operating systems in ease of use and accessibility. Moreover, unlike Windows or Mac OS, it comes in more than one flavor; different developers over the years have pioneered and maintained, with the help of the community, their own versions of the system, each with a different package of default software and a different target audience. These Linux distributions, or “distros” in user parlance, run the gamut from obscenely difficult yet infinitely customizable hacker favorites, such as Slackware and Gentoo, to world-class server setups, such as Red Hat Enterprise Linux (RHEL) and SUSE, to distros aimed squarely at the average user, such as Linux Mint and Ubuntu. (If one wishes to re-live one’s middle school days, some intrepid programmers have also created the one and only Justin Bieber Linux.) Where Mac and Windows users largely find themselves limited to a preprogrammed and largely unalterable desktop environment, Linux users can choose between a dizzying array of options, ranging from the gorgeous and endlessly tweakable KDE Plasma to the ultra-lightweight LXQt. Linux, then, quite unlike its competitors, offers its devotees a rare and beautiful thing: choice.

The system also offers a number of practical advantages. Microsoft Windows, the world’s most popular PC operating system, has achieved notoriety among computer users for its susceptibility to viruses. By contrast, Linux experiences widespread malware infections so rarely that the very existence of a Linux virus in the wild becomes a headline in and of itself—a fact largely due to Linux’s carefully constructed architecture, open-source development model, and wide distribution diversity. Most Linux distributions also allow new users to “dual boot” their Linux installations with their preexisting operating systems, permitting them to switch between, say, Windows 10 and openSUSE at will without fear of a forced commitment.

As a piece of free and open-source software, Linux inflicts no monetary cost on the user, nor does it incur an obligation to a Silicon Valley megacorporation. Where such behemoths as Windows and Mac OS sustain themselves through billions of dollars of corporate investment, Linux, perhaps miraculously, has managed to stay afloat largely through the talent and dedication of thousands of passionate, more or less ordinary people. The purchaser of a Mac or Windows installation must contend with the protestations of both his pocketbook and his conscience; the Linux user, by and large, needs face neither.

As public concerns grow about the unaccountable behavior of behemoth tech companies, as the most basic control over one’s own electronic devices seems an ever more distant prospect, it becomes incontrovertibly clearer that Linux’s time has come. Apple, Microsoft, and their ilk need not hold eternal sway over the digital lives of the American public; now more than ever, the user possesses both the opportunity and the obligation to declare his independence. By taking the plunge and downloading and installing the Linux distribution of his choice, he can do precisely that. The time has come to take the first step on the road to digital freedom. The time has come to turn one’s back on the plodding and shoddiness and inefficiency of Windows, on the sleek and stylish but eventually exasperating expense and exclusivity of a Mac, on the tyrannies and the iniquities of Big Tech. The time has come, at last, to embrace the penguin.