Aldridge strives to make an impact on and off the field 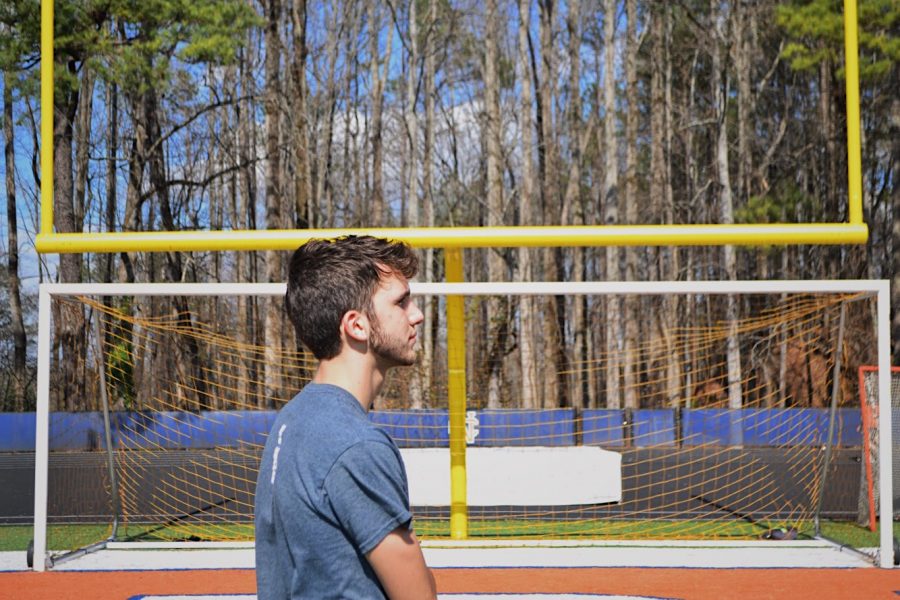 As a recent football commit to Point University, a private Christian institution, senior Will Aldridge excitedly awaits his next four-year journey. Originally an NC soccer player for three years, he joined the football team his senior year. “Before football games, I always write a Bible verse somewhere on my arm. The team walks out together and we all huddle around the field goal and pray, and then after that I say my own prayer and just thank Him for every opportunity I have and the opportunity to present myself in the game,” Aldridge said.

A sports team captures the talents of young athletes, but it also provides them with a home-away-from-home and a family on and off the field. From rainy practices on the muddy field to late night bus rides from away games, teammates develop an unbreakable bond with one another. As a Warrior on any of the school’s teams, the atmosphere of support, growth, and positivity fosters athletes that want to continue their skills and feeling of camaraderie in college.

From ten-year soccer star to the first-year kicker on the Warrior football team, senior Will Aldridge impressed football scouts and announced his commitment to Point University in West Point, Georgia. Despite receiving offers from other colleges, Aldridge chose this D2 private Christian college to provide him with the opportunity to both continue his football career and develop a deeper connection with God.

While sports have played a vital role in Aldridge’s life, he has recently rediscovered his bond with God and will pursue a double major in Family Ministry and Youth Ministry.

“Timing is crazy. I always thought I was gonna major in physical therapy, but when I finally got more involved in my church and got hired as an intern there, Point came through and they had what I wanted. It was just one of those things that you think is a coincidence, but God is like ‘Here you go,’” Aldridge said.

Aldridge works as a teen intern for Freedom Church and enjoys making an impact on other people’s lives while also spreading the word of God. As a Family and Youth Ministry major, he will further his responsibilities as an intern and hopefully create a lasting religious impression on a much broader scale.

“Anything that I can do to make an impact on somebody is something I want to do; I want to show to other people the way that He’s impacted my life,” Aldridge said.

Aside from his devotion to religion, Aldridge hopes to hone in on his sports skills. As a freshman, he will hold the position as Point’s punter and hopefully adopt the position of kicker his sophomore year. Aldridge’s skills on the soccer field helped prepare him for this vital position in football. After senior Anthony Rodriguez received an injury as the team’s kicker during the football season his junior year, the football coach was on the lookout for a new kicker.

“Anthony recommended me [to the coach] and I practiced one day, and coach was like ‘You’re on the team!’ I’ve always been interested in playing football, but I was never big enough to play larger positions like wide-receiver, running-back, and quarterback. When I got the opportunity to play kicker, I was like ‘Hey, I fit that role’,” Aldridge said.

Transitioning from a soccer player to a football player came with daunting feelings, but it also opened Aldridge’s eyes to the healthy competition and love between the players. With the support of his family, friends, and the NC football and soccer teams, he looks forward to the new challenges and experiences the next four years will bring him.

“I want to thank the coaches and my teammates and of course my parents and the opportunity to play. God just kinda threw it at me and I’m glad he did. I couldn’t be happier or more glad for everything that’s come my way this year,” Aldridge said.